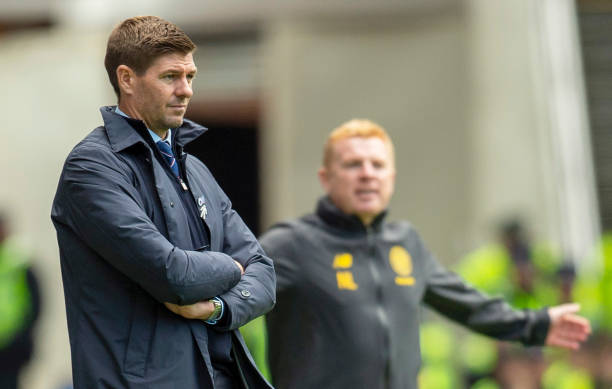 Last season, which was Steven Gerrard’s first season at Glasgow Rangers, the Ibrox club were five points behind Celtic after 20 games. It was around that time, the Gers started to fade away in the title race, while Celtic went from strength to strength.

This season, Celtic are five points ahead of Rangers after 18 games, although the Gers have played a game less. It will be down to two points, should they win the game in hand.

While Celtic have shown their supremacy both domestically and in Europe, Rangers have been equally good, advancing to the knockout rounds of Europa League.

The consistency shown by the two Glasgow heavyweights are admirable. Here at Sportslens, we’re selecting the best combined XI using 4-2-3-1 (most used by Celtic), 4-3-3 (most used by Rangers), and 4-4-2.

Goalkeeper: This is pretty straight forward. Fraser Forster has been simply outstanding this season for the club, keeping 10 clean sheets thus far.

Right-back: Jeremie Frimpong and Hatem Elhamed have both impressed for Celtic, but James Tavernier should get a place here. With three goals and six assists in SPL, the skipper is once again leading from the front.

Centre Backs: Celtic dished out £7m to secure the signing of French centre-back Christopher Jullien from Toulouse who became the second most expensive signing for the club this summer. And he is proving that every penny spent on him has been worth it.

His defensive partner Kristoff Ajer has done well. The 21-year-old Norwegian could become a world-class player in the future, but Conor Goldson has been slightly better than him. With 4.7 aerial duels won on an average, he is arguably the rock at the back for Rangers.

Left-back: Borna Barisic. The 27-year-old Croatian has rejuvenated himself under Gerrard this season, and has been simply top class. Boli Bolingoli has been equally good, and in time could fill the void left by Kieran Tierney.

Midfielders: Both Celtic and Rangers have a wealth of qualities in the midfield department. It is really hard to pick the best three out of so many good players, but Scott Brown stands out once again as the best of the lot in the defensive midfield role.

Callum McGregor has been an epitome of consistency for the Bhoys for the last few years, but Glen Kamara probably outshines him on the right midfield role.

Ryan Jack has been outstanding for the Gers this season, and he should fill the other midfield slot in the 4-3-3 system.

Front three: Alfredo Morelos with 27 goals in all competitions narrowly edge out Odsonne Edouard as the main striker. Celtic duo James Forrest and Mohamed Elyounoussi should take up the left and right side of the Colombian striker.

The pair of Scott Brown and Glen Kamara in theory would be a fantastic combination in the middle.

Ryan Christie has been phenomenal this season for Celtic in the no 10 role. He has grown from strength to strength in the last couple of seasons, and has established himself as an asset for the club.

The holding midfield pair of Brown and Kamara would be ideally supported by Forrest and Elyounoussi. Ryan Kent could be a good replacement but the former Liverpool attacker hasn’t played much for Rangers this season due to injury.

Upfront, Edouard and Morelos would form a lethal partnership. The pair has scored 43 goals between them, and are arguably the two best strikers in Scotland at the moment.