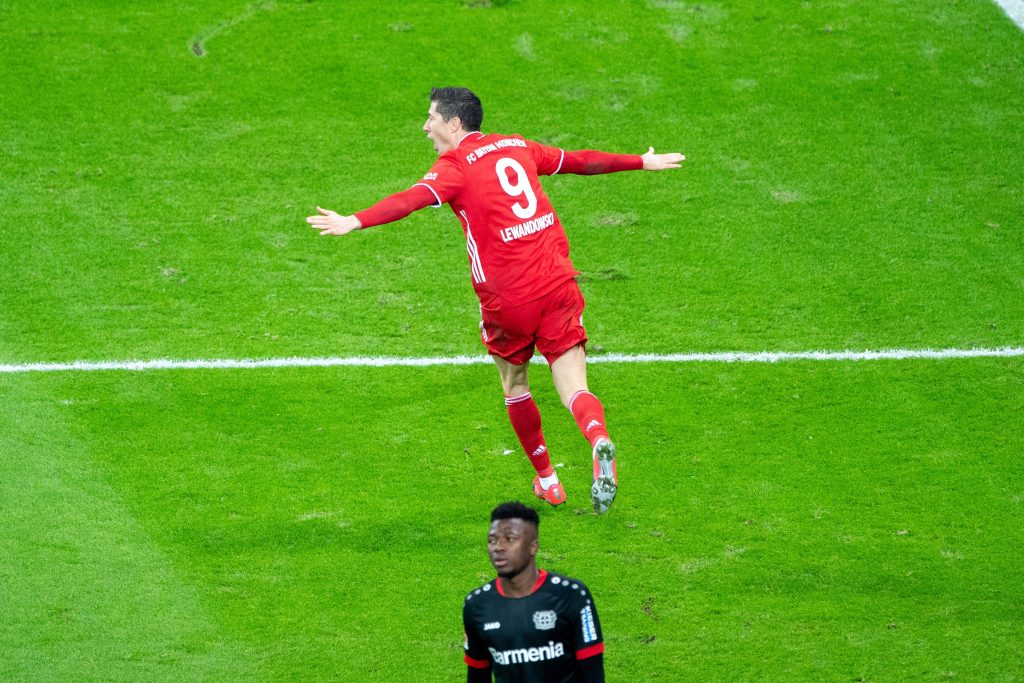 After a curtailed winter break, the Bundesliga is back. The story of the season so far has been one of fairy-tale overachievement for some, spectacular underachievement for others, teams struggling to score, scoring at will and drama on and off the pitch. The Rückrunde is set to be no different. Here’s a preview to whet the appetite.

Despite Bayern Munich going into the Christmas break top of the Bundesliga table by two points and looking to win their ninth consecutive Meisterschale, this year could very well see other clubs knock them off the top spot.

The Rekordmeister have certainly not been fully firing this term when you look at last season’s treble-winning campaign. Worries over Bayern’s pre-season squad depth have only intensified throughout the season, with key players picking up injuries, most notably, Joshua Kimmich. With a congested fixture list, Hansi Flick’s team has looked unconvincing at times, suffering from an inability to start well, remarkably conceding first in their last seven Bundesliga games. Teams will be quietly confident of taking points off them.

Nonetheless, Bayern will find hope in the fact that Kimmich, responsible for bringing tempo and tenacity to the side, should be fit once more for the restart. Winner of FIFA’s recent ‘The Best’ award and the top goalscorer in Europe in 2020, Robert Lewandowski has continued his exceptional form (17 goals from 13 games) and will, once again, be pivotal to Bayern defending their crown.

There is still hope for a nail-biting title race. For me, the team most likely to challenge Bayern right up until the end is Julian Nagelsmann’s RB Leipzig. Only losing once so far this season, Die Roten Bullen have been able to share their goals around to compensate for the loss of Timo Werner in the summer (12 different goal-scorers in the league) and have been defensively sound, with much-sought-after Dayot Upemecano showing his colours as an elite central defender for years to come. The recent €25 million addition of Dominik Szoboszlai from RB Salzburg could be exactly what Leipzig need to finally steal Bayern’s crown.

It is also hard to look past Bayer Leverkusen, who largely thanks to their much-improved defensive unit, as well as a young and prolific strike force, find themselves sitting second in the table going into the break. If they are to sustain a title challenge, they will need to show a winning mentality and consistency which has been missing all too often in Leverkusen sides of the past.

Expect the title race to be a genuinely close one, but with their two closest challengers lacking experience of competing at the highest level, I imagine Bayern’s quality and prowess to win out in the end.

The race for Europe: hot competition?

As in most Bundesliga seasons, it is the competition for Champions League and Europa League berths that is most exciting. The milieu of over-performing and under-performing teams around this part of the table guarantees the race will be ferociously fought and, like the title race, go right to the very end.

In truth, I expect Dortmund to mount a reasonable enough comeback in the second half of the season to warrant a European spot, but not enough to put them back in title contention. Dortmund’s problems run deeper than those pinned on now-departed Lucien Favre and interim boss Edin Terzic has his work cut out if he is to correct them. His job will be made easier, no doubt, by the return of Golden Boy Erling Haaland, without whom BVB have lacked a killer instinct, as well as a thorough understanding between the offensive players.

They might prove me wrong. But the poor form of countless key players – Jadon Sancho, Julian Brandt, Marco Reus – that has plagued them so far this season will have to change if the Schwarzgelben are to push further. But make no mistake, securing Champions League football is imperative for Dortmund.

For the first of the two Europa League places, VfL Wolfsburg is a solid choice. Recording only one loss so far this year – to the imperious Bayern – Wolfsburg have built on their reputation as a defensively solid outfit by adding a few more goals to their game, centred around Dutchman Wout Weghorst, who has chipped in with nine goals.

Despite a rather sluggish start to the campaign – mostly like due to having to get out of a tough European group with Inter Milan, Real Madrid and Shakhtar Donetsk – I expect Marco Rose’s Borussia Mönchengladbach to finish strongly. With no Champions League football to worry about until the end of February, a singular focus on the league should allow the Foles’ promising young group, including the likes of Luca Waldschmidt, Florian Neuhaus and Breel Embolo, to beautifully complement an established group of more experienced talent, led by captain Lars Stindl. The Foles will hope that speculation on Rose’s potential departure to Dortmund will not affect their form; playing four of the current top five teams in January will certainly be a test of their character.

Mid-table: who will break away?

With only seven points currently separating VfB Stuttgart in seventh and Arminia Bielefeld, who sit in the relegation play-off spot, the middle of the table is highly congested. Expect this to change. As a result of the shorter Hinrunde, Bundesliga teams have only played 13 of their 36 matches, meaning the post-Christmas period, will be crucial for their final standing.

At the top of this pile, expect to see the likes of Stuttgart, 1. Union Berlin and Eintracht Frankfurt contesting the best-of-the-rest spots. All three share one key trait. They are very difficult to beat. Eintracht and Union have both lost only twice this season (Eintracht drawing a remarkable eight games already) and all of them have proven more than capable of competing with the ‘big teams. Both Union and Stuttgart have beaten Dortmund this season, for example.

Of the three, it may be Die Eisern who are most likely to push for a European spot and currently find themselves sitting fifth, with talisman Max Kruse (6 goals, 5 assists in 11 games) to be back fit soon after the restart. However, don’t overlook promoted Stuttgart, who, under Matarazzo Pellegrino, have fashioned themselves into one of the most exciting and tactically astute Bundesliga sides so far, built around a highly attacking style of play.

As for the chasing pack, I predict all of the teams outside of the relegation play-off and direct relegation places to keep their heads above water for the remainder of the season. It certainly won’t be pretty, but you can expect the likes of SC Freiburg, Hertha BSC, TSG Hoffenheim and FC Augsburg to secure their Bundesliga status for next season with a comfortable handful of games to go – perhaps not due to any outstanding performances of their own, rather a marked lack of quality beneath them.

I’ve got Werder Bremen and 1. FC Köln to avoid the drop; both teams have experienced quite wretched form so far, but they have also found a way to at least pick up points (10 draws between the two sides) which cannot be said for the teams I have to go down. They will both be disappointed to barely improve on last season’s finish, but, at the end of the day, ought to be glad to stay in the league and will already be building towards a stronger performance in the next campaign.

Unfortunately, even at this stage of the season, it appears the fates of the Arminia Bielefeld, Mainz 05 and Schalke 04 may already be sealed. The latter two, especially, find themselves a considerable distance adrift and have shown little signs of springing into life any time soon.

Tipped at the start of the season to ‘do a Paderborn’ and finish rock-bottom, many have been impressed with Bielefeld’s dogged approach, rewarded with three crucial victories (all against fellow relegation candidates) and they have lost five games by just a one-goal margin. They also cover the most distance of any other Bundesliga team bar one. Their style of play should see them fend off direct relegation and feasibly put together a good run, which would see them avoiding going straight back down, but the Bundesliga experience of the teams above them may prove pivotal.

In recent years, Mainz have found a way to remain in the league, despite painfully underwhelming performances at times – this year, expect that to catch up with them. Their only hope of Klassenerhalt looks to lay almost exclusively in the hands of Jean-Philippe Mateta (7 goals this season), as seen in their solitary victory away to SC Freiburg, in which the Frenchman scored an inspired hat-trick. Losing to all teams nearest to the bottom – notwithstanding a draw with Schalke – Jan Siewert’s men have given themselves a mountain to climb if they want to stay up this year.

Finally, we come to Schalke – what else is there to say? Winless in 28 league games, Schalke have been in nothing but freefall for almost all of 2020. Losing two vital ‘six-pointers’ against Freiburg and Bielefeld, Die Königblauen rounded off the year in typically disappointing fashion. Marred by scandal on and off the pitch, they have performed as if already resigned to the 2. Liga and look far off the pace needed for a respectable Bundesliga outfit. Despite coming painfully close against Mainz and Augsburg of late, it seems as if they really cannot catch a break. And, onto their fourth head coach since September of this year in Christian Gross, Schalke will be hoping for somewhat of a miracle – one, quite frankly, that looks unlikely.

28 Bundesliga games without a win for #S04, and counting.#S04SCF pic.twitter.com/2CWBbTgUDx

It will be a much closer-run affair than in recent memory, but I expect Bayern to edge it late.

It’s all to play for here and it’ll be interesting to see if the likes of Union Berlin and VfL Stuttgart can keep up their remarkable Hinrunde form; and expect the bigger teams to go all-out for a big push to the end of the season.

As some teams to kick-on and some to flirt with relegation for much of the season, expect the congested mid-table pile up to change soon into the new year.

This could be decided early on, but I hope to be proved wrong.