There has been a loud susurration surrounding the rise and growth of football in Germany in the media which has a strong foundation for it. In the Deloitte’s 2013 Money League table, four clubs from the Bundesliga have made it to the top 20 and their figures are quite impressive.

Bayern Munich retained the fourth position yet again and despite having failed to win silverwares for consecutive season, they have amassed an increment of 15% from their total revenue earned in 2011/12.

The season has been the season of heart break of the Munich fans, who under the tutelage of manager Jupp Heynckes, finished runners up in the league, domestic cup and the Champions League.

Match day revenues have improved by 19% as Bayern Munich hosted two more home matches at the Allianz Arena with almost full attendance for majority of the matches.

There has been a significant rise in the broadcast revenue as well, as the club posted an income of €65.9 million, mainly resulting due to their excellent run in Europe (reaching the finals yet again for second time in three years) and as consequence received €43.8 million as UEFA central distributions.

Bulk of Bayern’s income comes from commercial deals that amount to 55% of total income. The club has recorded a 13% rise in commercial revenues taking total income in that sector to €201.6 million, highest ever by any club from a single revenue source.

Bayern already in a strong position to win the title this term around and with Pep Guardiola set to become their new manager next season, on pitch they are expected to dominate the world as well.

This perfect blend of strong commercial focuses (€30 million per season shirt sponsorship deal with Deutsche Telekom) and on pitch performances are putting the Bavarians well ahead of Premier League clubs. 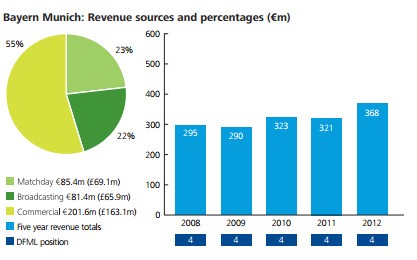 Dortmund have moved five places up to 11th in the Money League table, courtesy of their terrific domestic season under manager Jurgen Klopp.

They won the domestic double (first time in club’s history) and participated in the group stages of Champions League that earned them the highest position in the Money League table since 1997/98.

Like Bayern, commercial revenue accounts over half of Dortmund’s total revenue, having seen a growth of 24% last season. The merchandise revenue has increased by 61% while the club managed to extend contracts with existing shirt sponsor Evonik and stadium naming rights partner Signal Iduna on a long term basis.

There has been a significant growth in broadcasting revenue also, as the club participated in the Champions League, earning €25.4m through UEFA’s central distributions.

Match day revenue has always been a strong point for Dortmund. With an average attendance of 79,860, the club has recorded a 13% increase (hike in ticket price is also a major factor) in revenue from that sector. 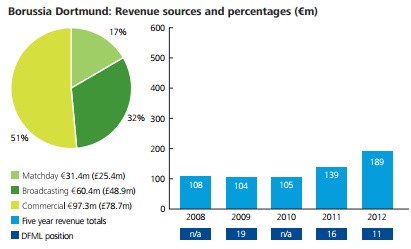 While Dortmund jumped five places above this year, their derby rivals Schalke 04 dropped four places behind to 14th and the central reason is their absence from UEFA Champions League football.

There has been a startling 14% drop in total revenues that hampered their finances badly in the broadcasting sector. The Broadcasting revenue has dropped significantly to only €30.7 million, about 49% decline, as the club failed to qualify for the Champions League.

However, they managed to improve on their commercial front that increased to €93.4 million aided by new commercial deals and the extension of contract with Russian energy company Gazprom, earning €15 million per season through shirt sponsorship. 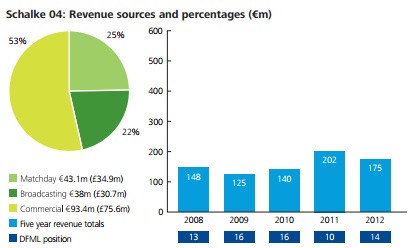 Hamburger retains their 18th position in the league though they suffered a 6% decrease in revenues. The German outfit finished 15th in the Bundesliga and unless they return to European football, could drop out from the Money League next season.

Hamburg are without European football for the second seasons running and as a result of which their Match days income hasn’t improved from previous season. In fact, their league attendance fell by 2% mainly because of poor performance on pitch.

Hamburg recorded only €23 million revenue in the broadcasting sector, smallest of any Money League club.

Like all other German clubs, commercial revenue is the life line for Hamburg as well, resulting in 48% of club’s total income. The club posted revenue of €47 million though it is a slight decrease of about 4% from the revenues earned in 2010/11 in that sector.

Thus, we see there is a mixed outcome in terms of revenues for the Bundesliga clubs. While  there has been a significant improvement for Bayern and Dortmund, the positions of Schalke and Hamburg are bit precarious.

Hamburg have to improve their league position in order to stay in the Money League while Schalke can expect an improvement in the next season due to their participation in the Champions League football this time around.

Likewise, Dortmund’s league campaign hasn’t been that spectacular this season, but the club would be in a better position still as they have improved on their European campaign which would see a substantial rise in the broadcast revenue.

Commercial sector has been the major source of income for all the German clubs, while they are catching up with other leagues in terms of broadcast revenue as well. 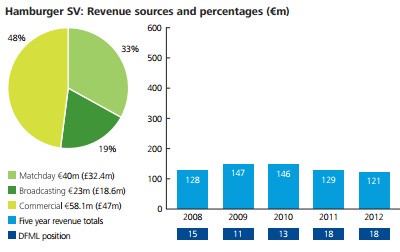