David Beckham is in contention for a starting place for England’s qualifier against Andorra on Wednesday. In doing so, he will reach 112 caps for England, cementing his spot as England’s most capped outfield player ever. Only the goaltender Peter Shilton holds more caps (125).

However, if Becks is chosen by Capello to represent England in South Africa, he will undoubtedly break that record and become England’s most capped player of all-time. This accolade will go a long way to help silence the ‘boo boys’ who continue to criticize his every move both on and off the pitch.

See what Beckham has done POST-Manchester United that should have silenced these critics a long time ago. Also click if you want to relive some of Beckham’s (and England’s) greatest moments.

Nearing the end of his contract with the underperforming Galacticos of Real Madrid, Beckham signed a whopping 5-year contract with the L.A Galaxy for £128 million. Manager Fabio Capello questioned his desire and stated that Beckham would never again put on the shirt for Real. He was not the only one though, as the British media (gotta love them) were quick to jump on his back, accusing him of ‘selling-out’ and prioritizing his fame rather than his ability to play the sport.

Now, of course money played a big role in his decision to leave but there were a couple of other things to think about as well, such as his lack of playing time at Madrid coupled with the winding down of his career. Here is a man who spent the last 15 years of his life playing football at the highest possible level, and at the two biggest clubs in the world. Highlights of his career include winning the treble in 1999 and captaining England. He became both the best crosser, and dead-ball striker in the game. Is that not enough for people?

What if, at age 31, he had had enough of it all and wanted a change of pace? And when the Galaxy offered to pay him a ridiculous amount of money for just that, the decision became a lot easier. In addition, Steve McClaren unceremoniously dropped him from the England squad. We all know what happened to England (and Steve) after that. The bottom line is: he had done more than enough, not just for himself, but for the sport, to do whatever he wanted to do. But, this is beside the point.

The goal that took England to the World Cup: 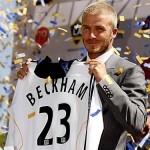 After Capello’s statement, we had thought we had seen the last of Beckham in the famous all-white kit of Madrid. He was not one to go back on his word. However, Beckham remained enthusiastic and performed so well in training that he forced his manager’s hand.

In an astonishing U-Turn, Beckham was back in the side to face Real Sociedad, a mere two weeks after being told he would never play again. He scored in that game, Mardid won 2-1, and the rest, as they say, is history. His energy and assists kept Madrid unbeaten in the 11 games after he was reinstated. They lost only one game in 17 after he came back. His amazing form during this stretch helped Real win their first major trophy in 4 years (they snatched the La Liga title from Barcelona on the last day due to head-to-head records). Real suddenly realized their mistake, and attempted to block Beckham’s transfer to the Galaxy, but to no avail. The Galaxy wouldn’t even entertain the idea. And who could blame them?

He became the Galaxy’s captain when he arrived mid-season, but sustained a knee injury that kept him out for the rest of the campaign. He trained with Arsenal over the summer, and there were rumors stating that his effect on the team was so good that they might consider signing him. Arsene Wenger certainly wouldn’t have had Beckham there if he didn’t’ think he would help the team or would be a distraction. This hardly sounds like the David Beckham who gets trashed in the papers no matter what he does.

The Galaxy had a winning record for the first time in two years during Beckham’s first season and were first in their conference for a time, although they failed to reach the playoffs. His highlight of his time at the Galaxy had to be a 70-yard goal (seen below) after the goalie had come up for a corner.

The second time he’s scored from inside his own half…note how the ball goes right down the middle of the goal:

Many people used the team’s failure to reach the post-season as another mode of attack on Beckham’s abilities. However, these people fail to realize that Beckham was never capable of being a one-man team, even in his prime. He was never good at beating his man, not known for his pace and not known as a midfielder who could score goals from open play.

Instead, his game is centered around passing the ball to others. He needs proven goalscorers and/or a fullback who can overlap him on the wing for his game to work well. Gary Neville did this to perfection for Manchester United, while Dwight Yorke and Andy Cole took care of the rest. Madrid were full of proven scorers such as, Ruud Van Nistlerooy, whose predatory instincts in the box complimented Beckham’s passes well. Landon Donovan sucks. 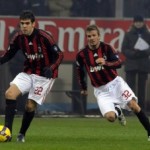 His form did not go unnoticed by those whose opinions really mattered. He was recalled to the England squad by the new England manager, the very man who had told him a year earlier that he would not play for him again. That man was Fabio Capello. Beckham continued to impress his former boss and his form on the international stage rewarded him with a loan deal to Italian giants, AC Milan. The reason for this was that he needed to keep fit to stay in contention for England’s qualifiers (Andorra on Wednesday).

So, after a full year of the MLS, Beckham was back at the highest possible level, playing for the third biggest club in the world. He contested for starting spots against four World Cup winners in Ronaldinho, Kaka, Pirlo and Gattuso. He surprised us all again by proving he could still compete among the world’s best. In fact, Milan begged to keep him after his loan spell was up and he was due to report all the way back to L.A. Beckham decided this offer was too good to pass up. He took a huge pay cut, and £3 million out of his own pocket to finish the season with Milan, in the hopes he could continue to play for England. Can you say dedication?

The risk paid off, as he is now training with the national squad to face Andorra on June 10th. He is due back at the Galaxy in July and after finishing the MLS season, he will fly back to Milan in November. Then, there’s the big one – the World Cup. Oh, and after that, he goes back to the Galaxy in July. How can you not admire this guy? Can you think of any other players who would be willing to do this at 34 years old, or less even?

I think the most important thing here is that he didn’t allow what was being said about him off the pitch to affect his performance on it. He let his playing do the talking and has been justly rewarded for it. I hope he goes to the World Cup. I hope he breaks Shilton’s record. He deserves it.

His biggest moment in an England shirt…