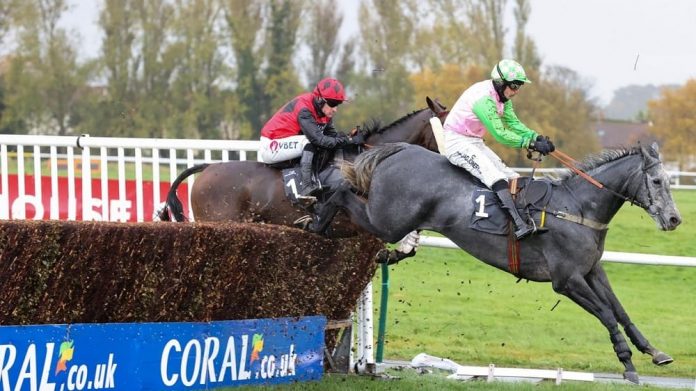 The fourth of four Grade 2s and big betting race at Haydock Park’s main January meeting is the Peter Marsh Chase over an extended 3m 1f. This race, won in some style by Royale Pagaille 12 months ago, looks more competitive this year. Which horses appeal to SportsLens horse racing experts for this feature contest on Saturday, 22 January (2:35)? Check out their Peter Marsh Chase tips in full here.

All recent winners of the race over the last eight seasons came to Haydock with two previous runs under their belt. The ground is often testing on Merseyside at this time of year, so fitness is essential. As a limited handicap chase, the minimum weight carried is 10st 4lb but it’s not unheard of for the winner running out of the weights.

Only two favourites have had success in the Peter Marsh Chase in the last 10 renewals. It may pay to look beyond the market leader on horse racing betting sites to find the winner, then. Seven of the last eight victors were last in action between three-and-a-half and five weeks before the race. Exceptional horses have been laid out for the contest, though.

Ratings can’t tell us a great deal this year. Typically, the Peter Marsh Chase goes to horses with an official mark of between 135 and 146. However, anything entered in this renewal rated below 143 is out of the handicap. Both Bristol De Mai and Royale Pagaille won the race off marks in the mid-150s.

Past form at Haydock is a huge plus and almost all recent winners had won at 3m or further. Three of the last six winners were 10-year-olds but the other five in the eight most recent renewals were aged between six and eight. It’s time for some 2022 Peter Marsh Chase tips from our experts…

Why Royale Pagaille is favourite in the Peter Marsh betting again

Venetia Williams has won this race three times before including with Royale Pagaille under top weight last year. He returns to the scene of that great triumph. A typical French import to the Williams stable in Herefordshire, Royale Pagaille has Haydock form figures of 112. The eight-year-old Blue Bresil gelding won on both of his outings at this venue last term.

Royale Pagaille won a novice chase here, then followed-up in a Kempton handicap over last Christmas. He then completed the hat-trick with a facile success in the Peter Marsh Chase 12 months ago. As Royale Pagaille stormed home by 16 lengths, connections pitched him right in at the deep end. Rich and Susannah Ricci’s horse was far from disgraced when sixth in the Cheltenham Gold Cup on ground sounder than ideal.

Although put firmly is his place by A Plus Tard in the Betfair Chase on reappearance over course and distance, this is easier. Royale Pagaille beat everything else home in that Grade 1, so represents the best of that form here. He is 7lb higher in the weights than 12 months ago and this is probably a better renewal, so punters can make a case against Betfred‘s 3/1 favourite.

It would be no surprise, though, if Royale Pagaille took the Peter Marsh Chase again. At the time of writing, the chase course is heavy in places at Haydock and that suits him to a tee. Williams has had a cracking season and remains in excellent form. The yard boasts a 28 per cent strike rate with its runners, so Royale Pagaille is again the one they all have to beat despite top weight again.

Back Royale Pagaille with Betfred

Empire Steel out for compensation and may get it

Scottish trainer Sandy Thomson was cursing his luck when Empire Steel fell four out when travelling well in the Rowland Meyrick at Wetherby on Boxing Day. This eight-year-old grey looked all over eventual winner Good Boy Bobby when he crashed out of the race. The handicapper couldn’t increase his rating for taking that tumble either.

In fact, Empire Steel is down to an official mark 140 but probably has enough in-hand that running off 143 isn’t a problem. He trounced the now 164-rated Protektorat when they met in his own backyard at Kelso last February. Empire Steel also shaped nicely over course and distance on reappearance in November when chasing home Strictlyadancer.

The winner completed a hat-trick that day and the form of his previous successes at Cheltenham read well. On the Kelso run, Empire Steel wasn’t a stone-and-a-half inferior to a horse rated 1lb above Royale Pagaille by the assessor today. He looks a free each way bet while odds of 5/1 last. Thomson could well gain compensation for his Wetherby woe with William Hill paying four places.

Remastered with point to prove in Peter Marsh Chase

Those punters backing Empire Steel after shaping well despite a fall have a cautionary tale in Remastered. He looked as though he was going very well indeed in the Ladbrokes Trophy when falling four out. David Pipe’s charge thus had an unchanged mark for the Tommy Whittle over course and distance last time out.

A well-backed 9/4 favourite with online bookmakers that day, Remastered found one too good. The Peter Marsh Chase is a Grade 2 rather than a Class 2, so demands plenty more off an again unchanged mark. Pipe did win this race in 2010 with Our Vic yet the Pond House team’s current form is a concern.

Remastered, now a nine-year-old Network gelding, did win at this level in novice company last season. That run in the Reynoldstown stacks up with two others in the field winning since. Many experts feel that Remastered has a big staying handicap chase in him, but a top-price 5/1 with Bet365 looks plenty short enough after that disappointment here before Christmas.

Bet on Remastered with Bet365

Any race where going is heavy in places is ideal for Lord Du Mesnil, another Haydock specialist in the line-up. Trained by Richard Hobson, this nine-year-old Saint Des Saints gelding’s best form is over further. However, Lord Du Mesnil ran a belter off top weight when chasing home Good Boy Bobby in the Rowland Meyrick last time out.

Although up 2lb for a defeat, his course form figures of 1121 command respect. Lord Du Mesnil has always saved his best for Haydock and the Hobson team have been among the winners this month. Now stepping back up in trip, he could well have a say in the finish.

Kielan Woods, who rode Lord Du Mesnil at Wetherby, is aboard again. He’s also had plenty of winners in January so far, so this combination could collect. The presence of Royale Pagaille in the field means Lord Du Mesnil has a nice racing weight of 10st 13lb for once. He is 8/1 with 888Sport to go one better than his last run.

Back Lord Du Mesnil each way with 888Sport

Sam Brown overpriced and has each way squeak

It is 10/1 and bigger for the remainder of the Peter Marsh Chase field. Yet another lover of testing conditions, Sam Brown, looks overpriced. Trained by Anthony Honeyball, this 10-year-old Black Sam Bellamy gelding bolted up in the Altcar Novices Chase on this card two years ago. Sam Brown needs deep ground and things haven’t gone right since.

However, any course winner commands respect at Haydock. His three-length third to Imperial Aura in the Colin Parker at Carlisle conceding weight to the winner and runner-up was a good effort in the circumstances. Setbacks last season meant we didn’t Sam Brown again until the Punchestown Festival when he didn’t handle a sounder surface.

There are two ways of looking at his remote third to Protektorat in the Many Clouds Chase at Aintree on his return. He was never put in the race, plugging on well behind both the winner and Native River. However, Sam Brown should come on for that. With Hills paying on fourth place for each way bets, Honeyball having winners and a nice racing weight of 10st 8lb, 18/1 does look big.

Back Sam Brown each way with William Hill