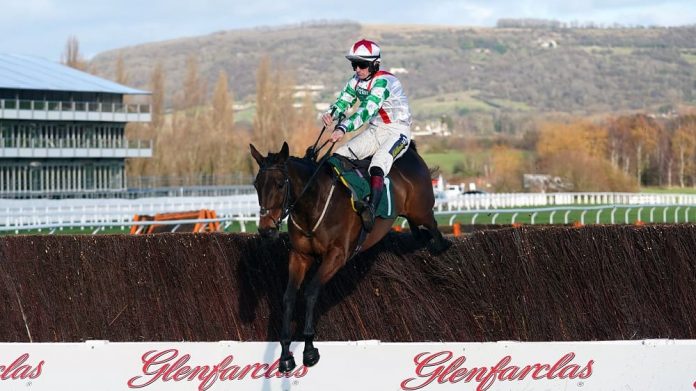 Stats and trends suggest here that you need a horse rated in the 140s to land the spoils. Five of the last seven winners fit that band. A well-handicapped sort lower down the weights or a potentially class horse framing them can be successful, though. It is rare for a horse to win this first time out, meanwhile. Six of the seven most recent scorers took this after running between 18 and 33 days beforehand.

Horses aged seven and nine have enjoyed the most success of late. Three of the last five victors are from the latter bracket. Second season chasers and novices also boast a fine record. Most of the top horse racing betting sites know this, so that is all factored into the market. Favourites have won four of the last seven renewals, yet only once since 2016. Let’s take a look at those New Years Day Handicap Chase tips from Cheltenham…

Venetia Williams saddled Aso to land this off top weight in 2019 for a third win in the race, so may well do so again with typical stable French import Funambule Sivola. This seven-year-old Noroit gelding made great progress last season, winning four of seven starts. Funambule Sivola also placed on two other occasions.

He chased home Shishkin in a Grade 1 novice chase at Aintree in the spring, then found only Clarence House hero First Flow too good in the Peterborough Chase on reappearance. As Funambule Sivola tired on the run-in against an unexposed rival at the trip, he should strip fitter for that run.

The handicapper has cut him 1lb of slack off the back of that. While Funambule Sivola still concedes weight all-round, he may well be capable of doing that. The yard had a superb last six weeks in 2021, so Bet365 go a top-price 7/1 that their runner goes one better than his return.

Philip Hobbs went close in the December Gold Cup over course and distance last month with Zanza. That one meets the winner, Coole Cody, off 2lb terms and level weights with just a couple of lengths to find. This seven-year-old Arcadio gelding has appreciated stepping up in trip for his last couple of starts too.

Zanza beat subsequent Tingle Creek hero Greaneteen when third in the Grade 2 Haldon Gold Cup at Exeter on reappearance. He then dead-heated for sixth in the Paddy Power Gold Cup during the November Meeting here at Cheltenham. Zanza then turned the tables on Midnight Shadow when nabbing second in the dying strides last time out.

In handicapping terms, he has every chance of doing the same to Coole Cody who is now an 11-year-old. Hobbs puts cheekpieces on Zanza for the first time. If they have the desired effect, then he could well be the best value and a solid each way bet in the New Years Day Handicap Chase with William Hill paying six places and going 15/2.

Bet on Zanza each way with William Hill

Paddy Power Gold Cup fifth Galahad Quest has seen his gallant third at Wetherby on reappearance advertised in spades by the winner Good Boy Bobby. That one has since gone down fighting a head in the Rehearsal Chase at Newcastle before returning to West Yorkshire and landing the Grade 3 Rowland Meyrick on Boxing Day.

Galahad Quest was home a head in front of Zanza, yet now meets that re-opposing rival off 3lb better terms. If no worse for a fall at Aintree on Becher Chase day, then it gives him every chance of confirming the form. The standout 9/1 with Bet365, who pay five places, could also be a bit of each way value.

Bet on Galahad Quest each way with Bet365

Three of the last seven renewals of the New Years Day Handicap Chase have gone to Cheltenham local trainer Nigel Twiston-Davies. The sole runner from his nearby Naunton stables is Vienna Court. Now a seven-year-old Mahler mare, she bolted up over course and distance against her fellow females at the International Meeting in December.

Vienna Court ran a fine third to The Glancing Queen, a winner in Listed company at Warwick since, on her reappearance at Bangor. She meets Chepstow conqueror Funambule Sivola a whole stone better off at the weights from last season too. Vienna Court seemed to relish the step up in trip when we last saw her. Although now 12lb higher in the weights and up in class, it was still a very impressive victory.

A revised mark of 135 gives Vienna Court a nice racing weight of 10st 6lb here under Sam Twiston-Davies. She has also seen her third to Zambella advertised by both the winner and runner-up. The former is a stable companion who has two Listed wins this term, while the latter took the Mares Champion Hurdle at Punchestown. There is some great each way value in Vienna Court at 10/1 with William Hill here.

Back Vienna Court each way with William Hill

Bottom weight Deyrann De Carjac continues to drop in the weights despite finishing fifth in December Gold Cup last time out. Trained by Alan King, this nine-year-old Balko gelding is a massive 15lb lower than the mark he ran off when a two-length third in the Dipper Novices Chase over course and distance two years ago.

While he perhaps hasn’t run to that level since, Deyrann De Carjac also filled the same spot behind Champ in another Grade 2 contest at Newbury beforehand. The winner has since won the RSA Chase and Long Walk Hurdle. Hold-up tactics seem to give Deyrann De Carjac too much to do but a more positive ride off 2lb lower than last time could yield different results.

On the pick of his form, this horse is worth one more try off the second lowest chase mark of his career. Deyrann De Carjac could easily outrun his best odds of 22/1 with online bookmakers including BoyleSports, who also pay five places. The New Years Day Handicap Chase has a wide-open feel, so only bet on horses each way.

Back Deyrann De Carjac with BoyleSports

Back thee five each way with bookies either paying five or six places: