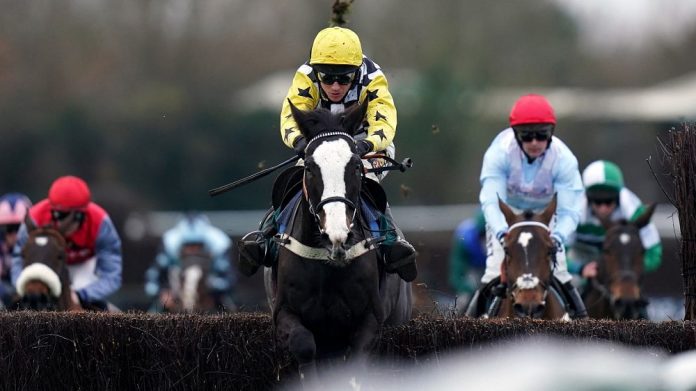 The first of three graded races at Cheltenham on New Year’s Day is the extended 2m 4f Grade 2 Dipper Novices Chase (1:25). This contest, first run in 1980, has past winners which include Little Owl, Barton, My Way De Solzen and Oscar Whisky. See who our experts fancy at the home of National Hunt horse racing with 2022 Dipper Novices Chase tips below…

No recent winner has had bigger a starting price on horse racing betting sites than 4/1 over the last eight years. Last season’s renewal moved to Wincanton after wintry weather forced Cheltenham to abandon the card. As recent winners of the Dipper show, at least previous run but no more than three in the campaign beforehand, is common ground.

Younger chasers don’t have a good record, so sticking to horses aged between seven and nine is another trend that it could pay to follow. The six most recent winners all last ran at least three weeks prior to this Cheltenham meeting. Ratings suggest that it takes a horse at least in the high 140s to land the Dipper Novices Chase so this may be a below par renewal.

Experience of Cheltenham and its undulations is a huge advantage, meanwhile. Handling the stiff uphill finish is important on this left-handed, galloping track. Alan King has trained three winners of this and could enhance that record further. Get the lowdown on the race with our expert tipster gives Dipper Novices Chase tips for this year.

Why L’Homme Presse has the shortest Dipper odds

Welsh Marches trainer Venetia Williams enjoyed a terrific end to 2021 with L’Homme Presse bolting up in an Ascot graduation chase to make it two from two over fences. Now aged seven, the Diamond Boy gelding has only had six career starts. L’Homme Presse remains open to any amount of further progress, given his lightly-raced profile.

Williams does well with her French imports, frequenting the Deauville Sales. L’Homme Presse only made his chase bow in an Exeter handicap on 3 December, defeating favourite Gunsight Ridge by six lengths. He then followed-up again against more experienced types at Ascot just 15 days later when storming to a 13-length victory.

This is a third start inside a month for L’Homme Presse but Williams has no qualms about turning him out so quickly again. He jumped left at Ascot, so coming to Cheltenham should be no problem. It is easy to see why online bookmakers including BoyleSports have L’Homme Presse their 7/4 favourite off a mark of 148. He does concede weight to all bar one rival, so it’s a question of value. Others are preferred at the prices.

Back L’Homme Presse with BoyleSports

Given her stable’s fine record of three wins in this since 2007, The Glancing Queen is another form horse that looks a bit of value. King steps her up in grade from Listed company and against the geldings here. An eight-year-old daughter of Jeremy, The Glancing Queen couldn’t reach the leaders when a staying on fifth in the Dawn Run over an extended 2m here.

She has shaped for some time like going up in trip will suit. After landing the Listed event for mares at Bangor on reappearance, The Glancing Queen confirmed that with an even more impressive victory at Warwick in the Lady Godiva over 2m 4f. There is substance to her form as well. Vienna Court, back in third at Bangor, has since come out and bolted up here in a mares’ handicap at the International Meeting in December.

The Glancing Queen, who has smart back bumper form and a third in the Grade 1 Challow Hurdle as a novice, receives weight all-round here. Some of the mares’ allowance is offset by a penalty for her two Listed wins but she looks well worth a crack against the boys. Best Dipper Novices Chase odds of 4/1 with William Hill look well worth taking.

Back The Glancing Queen with William Hill

Millers Bank tops ratings but must bounce back

According to official figures, the best horse in this race is Millers Bank. He comes into the contest off the back of a fall at the Newbury Winter Carnival. Trained by Alex Hales, this eight-year-old son of Passing Glance ran a career best when third in the Grade 1 Aintree Hurdle during the Grand National meeting in April.

Millers Bank also scored first time out over fences at Huntingdon from a subsequent Doncaster handicap winner at Lingfield. He couldn’t build on his reappearance, however, with the Newbury race in this grade at his mercy. The contrast between his jumping on both starts so far was stark. Millers Bank made multiple mistakes before unseating his rider in the lead two out.

Cheltenham is an unforgiving track and the downhill fence will be a particular concern for connections. Millers Bank faces the toughest test of his jumping so far at this track. The stable isn’t in any form but jockey Harry Bannister won the Mandarin Handicap Chase at Newbury after Christmas. Millers Bank is a top-price 4/1 with Bet365 but fallers insurance might be wiser for his supporters.

Bet on Millers Bank with Bet365

Come On Teddy the each way play in Dipper Novices Chase

Tom George saddled Come On Teddy on a New Course handicap hurdle success over 3m here last season. This eight-year-old Fame And Glory gelding then qualified for the Pertemps Final and ran a fine third in that Grade 3 Festival contest. It is eye-catching course form over further that reads well in relation to this.

Come On Teddy has since landed his chase bow at Uttoxeter, prevailing in a novices’ limited handicap by a neck from Fern Hill. He should come on for that run after 241 days off the track. Victory at Cheltenham in December 2020 came second time out last term as well.

On official ratings, Come On Teddy has a bit to find with the market principals off these terms. However, his shrewd connections don’t go tilting at windmills. The Noel Fehily Racing syndicate own him with the former jockey fronting up. Odds of 9/1 with BoyleSports look a solid each way bet, given the good Cheltenham record Come On Teddy boasts. He should be staying on when others cry enough.

Back Come On Teddy each way with BoyleSports

Two horses who looked like potential chasers in the making drop back in trip for the Dipper. Fantastikas represents the Cheltenham local stables of Nigel Twiston-Davies. This seven-year-old Davidoff gelding won impressively on his first outing over fences at Lingfield, then got outpaced and outclassed by Threeunderthrufive in this grade at Doncaster.

Twiston-Davies hasn’t brought Fantastikas to Cheltenham before. Whether he will handle the course is an unknown, then, but it must also be a concern. The Naunton handler isn’t exactly shy about running his horses at Prestbury Park. Fantastikas is 12/1 with Bet365 to bounce back here.

Oscar Elite went into plenty of notebooks after placing in both the Albert Bartlett and Aintree 3m Grade 1 novice hurdle in the spring. Trained by Colin Tizzard, this seven-year-old son of Oscar fell at the November Meeting on his chase debut here. Expectations were that he should’ve learned plenty from that experience.

When last in action at Huntingdon, however, Oscar Elite ran in snatches and finished a tired last of three. The Dipper Novices Chase demands plenty more. Stable companion Lostintranslation took this in 2019, though, so the yard knows what it takes to win. Oscar Elite needs to improve but plenty of punters won’t give up him on yet. He is also a 12/1 chance with Bet365.