After a tough couple of weeks, Manchester United will be looking to return to winning ways when they host struggling Crystal Palace on Saturday.

Manchester United are winless in their last three whilst Crystal Palace are one worse having picked up only one point in their last four.

Options in midfield are much better with only Jesse Lingard only ruled out, and Ashley Young a doubt.

The visitors are missing their key defensive player with Mile Jedinak suspended. Expect the Australian’s absence to be a huge loss for Crystal Palace defensively.

Wilfried Zaha is ineligible to play against his parent club whilst on loan from Manchester United is the only other absentee for Crystal Palace. 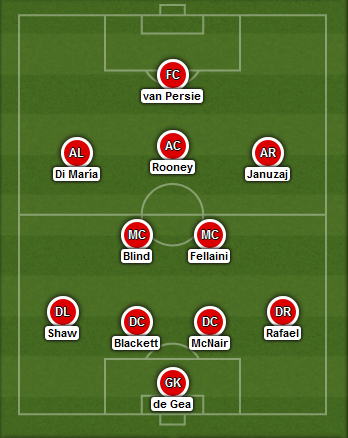 Manchester United are short of options in centre-back so will be hoping Rafael is fit to start at right-back. If not, Antonio Valencia is available and played that role against Manchester City last weekend. Going forward, Louis van Gaal’s side have most of their options available. Ángel Di María has been effective versus the lesser ranked sides so you can expect him to have a good game here, whilst the likes of Wayne Rooney and Robin van Persie are match winners too. 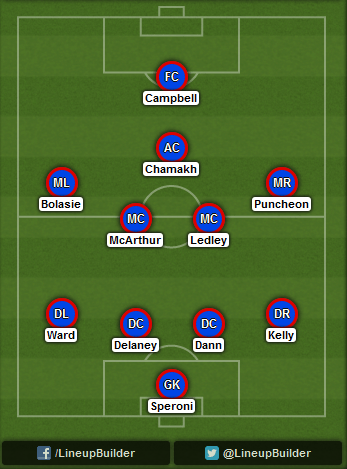 Crystal Palace play with two pacey wingers and then either three midfielders or Marouane Chamakh pushed up behind Fraizer Campbell.  The visitors have to fancy their chances in scoring against a Manchester United defence that has not been so solid this season and whom is once again missing starters.

Ángel Di María vs Stephen Kelly
Manchester United’s left winger will be one of the key players in this match. Ángel Di María has torn open a few defences in his short time at Manchester United and Crystal Palace is another defence we think he’ll have a great game against. Stephen Kelly is in for a tough match and needs support from his right winger if he’s to have any success.

Wayne Rooney vs Joe Ledley
Mile Jedinak is a massive loss to Crystal Palace. Joe Ledley has a busy day ahead of him to keep Wayne Rooney and the Manchester United defence quiet. The England captain plays an important role behind Robin van Persie, both as a goal threat and coming back to collect the ball and create chances. Expect Rooney to be both a goal threat and a playmaker in this match with the Palace defence missing Jedinak.

Robin van Persie vs Scott Dann
Robin van Persie has not been at his elite best this season but scoring against Crystal Palace is a real possibility for the Dutch striker this weekend. Only Queens Park Rangers have conceded more goals this season than the South East London club and they don’t match up well on paper versus one of the Premier League’s deadliest offences.

Prediction: Manchester United 3-1 Crystal Palace
The visitors are out of form and will struggle against the Manchester United attack. Louis van Gaal’s side are winless in three but this looks very winnable, at home with most of their key attacking players available. With Palace’s defensive record and United’s unavailable defenders we’re predicting a few goals in this one.