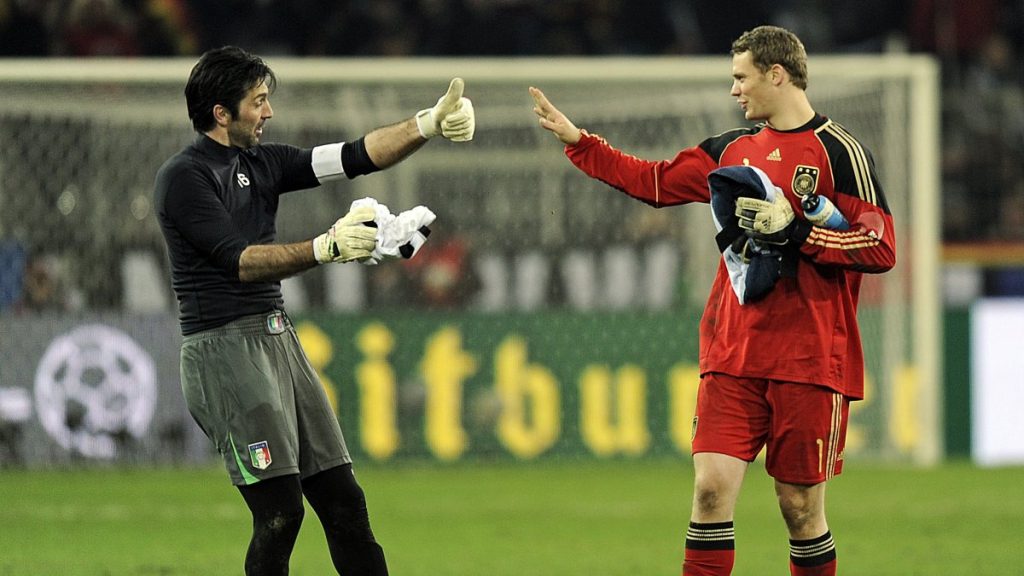 When Gianluigi “Gigi” Buffon was included in the final 23-man Italy squad eyebrows were raised about his selection. Many wondered why Italy are still sticking with a 38-year-old player while a new player is not being given an opportunity.

Or is age just a number? As long as you’re performing at the highest level, age is not a barrier. Italy’s performance so far in Euro 2016 proves Conte’s decision to keep Buffon was vindicated. And why not? He is a “champion” goalkeeper who has played 160 games for his nation, the most appearance by any Italian player. He is a Juventus legend and played a massive role in Old Lady’s historic five consecutive Scudetto titles. He deserves this spot simply on the basis of merit and form.

A lot has been said and written about Antonio Conte’s masterclass tactics in Euro 2016 that saw Italy outclassing Spain in every department in the round of 16. The two strikers joined by marauding wing-backs in a 3-5-2 system has caused trouble to big teams. Conte’s Italy have surprised everyone with their bold attacking displays.

However, it is at the back – with the excellent BBC trio of – Andrea Barzagli, Leonardo Bonucci and Giorgio Chiellini – where Italy have laid the foundation for success. And behind the wall, there is this veteran warrior, who has been marshalling the defence with great astuteness. Buffon is like a coach on the pitch who is leading the team from the back. He is a gladiator.

What is truly inspiring about him is he still possesses the same hunger and passion even after playing for his country for over 20 years. He embodies the spirit of what it means to represent your nation.

Usually, with age, players tend to lose reflex. The goalkeepers especially face problems with sighting and tends to make errors. In the case of Buffon, it is just the opposite. Like an old wine, he is getting better with his age. Not only has he taken great care of his fitness, his reflexes are still as good as any young goalkeeper. His stunning save off Gerard Pique against Spain shows how good his reflexes are.

Watching Buffon gives a tremendous joy and is a learning curve as well. He is constantly chatting with the defenders, giving them orders in the six-yard box and altering them of every possible danger that can come on their way. The way he organises the defensive wall during a set-piece is something every young goalkeeper should take note of and learn from him.

Another interesting feature about Buffon’s qualities is anticipation and reading of the game. Using his vast experience, he can take quick decisions – like when to fist the ball away and when to grip – which apparently may seem basic, but are hard to execute.

His opposite number, Manuel Neuer is relatively young to him, only 30, and is a goalkeeper of a different breed. In fact, he is a rare breed, one who is seen as a revolutionary.

He is adventurous and loves to take a risk at every opportunity. In fact, he is so bold and fearless that at times it gives the impression that he enjoys playing with a risk. Plus, he is energetic and has the legs to cover the distance.

The best thing about Neuer is his intelligence. He is such a smart player who knows what’s best required of him according to a situation. The moment he anticipates a danger either he quickly rushes off to narrow the angle or clears the ball away before the player reaches.

But where he has taken his game beyond everyone else, where he has been in a pioneer-sort-of from his contemporaries, is in his style of goalkeeping. He has changed the very definition of what a goalkeeper should be like.

An assured passer of the ball, his distribution from the back makes him a sweeper-keeper as if he is the fifth defender for his team. Sometimes you feel he takes unnecessary risks by going too far with the ball on his feet but he is such a confident player that he hardly makes a fool of himself by trying to do the extraordinary.

On Saturday, two of the world’s finest goalkeepers will face other but only one will have the last laugh. Buffon has tremendous respect for the German keeper and treats him as the best in the world.

“I said that Neuer is better than me because at the end of the day it could well be true,” said Buffon in a Press conference.

Legends are hard to compare and especially players with contrasting styles – at one hand you’ve a 38-year-old old-school goalkeeper who has already reached the pinnacle of his career, and at the other end there is this Bayern Munich superstar who is revolutionising the art of goalkeeping in his own way.