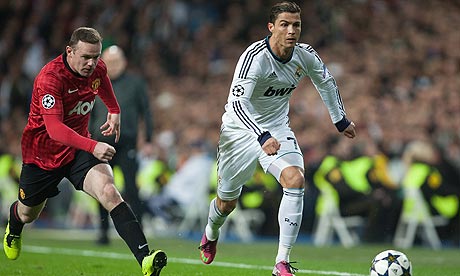 Manchester United forward Wayne Rooney (left) and Real Madrid forward Cristiano Ronaldo (right) have both been linked with summer moves away from their respective clubs to each others’.

However, with both players playing for two clubs of such magnitude, the grass is rarely greener on the other side.

Cristiano Ronaldo was signed by Madrid for a fee around £80M. It’s very unlikely new Manchester United manager David Moyes would consider paying anywhere near to the figure to bring the 28-year old back to the club. At 28, the Portuguese international has little re-sale value, and certainly won’t command a similar figure in a few years time. Put simply, Manchester United won’t get their money back for Ronaldo if they were to re-sign him now.

Manchester United’s want-away striker Wayne Rooney has been linked with every top club in Europe this summer, but only a select few can afford him. Real Madrid are close to selling striker Gonzalo Higuain, which would free up some funds, but they have been more keen on signing Liverpool striker Luis Suarez, and Tottenham forward Gareth Bale.

Both players may want a change of scenery next season, but their transfer fee and wage demands will be a stumbling block for any side. The pair would warrant too much money for outlay which at the minimum would have to be winning their domestic league title – let alone the Champions League.

Cristiano Ronaldo and Wayne Rooney are among the highest paid footballers in the world. Regardless if either player wants to leave the club, finding a potential suitor willing to part with the money required to sign them is another story.

It’s more likely the pair will remain at their respective sides for at least another season. Inevitably with a new-and-improved long-term contract earning them even more money per annum.