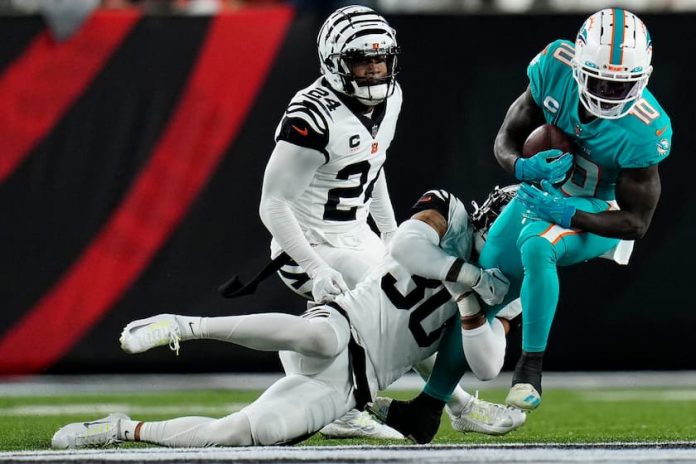 Tyreek Hill has revealed that he feels disrespected by comments made from a Bengal’s coach following the Dolphins 27-15 loss on Thursday night football.

The Dolphin’s star has claimed that an assistant on the Bengal’s sideline has made comments towards him that he isn’t pleased with. Following the game, he told reporters: “Whichever coach that is, I’m gonna come find you bro … me and you gotta have a mano a mano conversation, cause at the end of the day I felt disrespected as a man.”

Tyreek Hill said a a Bengals coach said something to him during the game that he didn't appreciate:

"Whichever coach that is, I'm gonna come find you bro … me and you gotta have a mano a mano conversation. 'Cause at the end of the day I felt disrespected as a man."

It’s unclear exactly what was said and by who, but one thing is certain Tyreek Hill isn’t happy. The comments may have been in reference to Hills pregame trash-talk of Eli Apple the Bengals cornerback: “I can’t wait to go against Eli Apple. I owe you, boy. I owe you. Cheetah is here.”

Tyreek was likely referencing the Chiefs AFC championship loss to the Bengals last postseason, in which Eli Apple tackled Hill short of the end zone just before halftime. Hill was then later traded to the Dolphins in the offseason.

Following Hill’s trash-talk he recorded 10 receptions for 160 yards in a game that was disrupted by Tua Tagovailoa’s horrible injury.

The scary injury was at the forefront of Hill’s mind following the game: “You wanna win the game but obviously you wanna make sure that your brother is alright. Football is just our part time job, but that brotherhood is something that’ll last forever.”