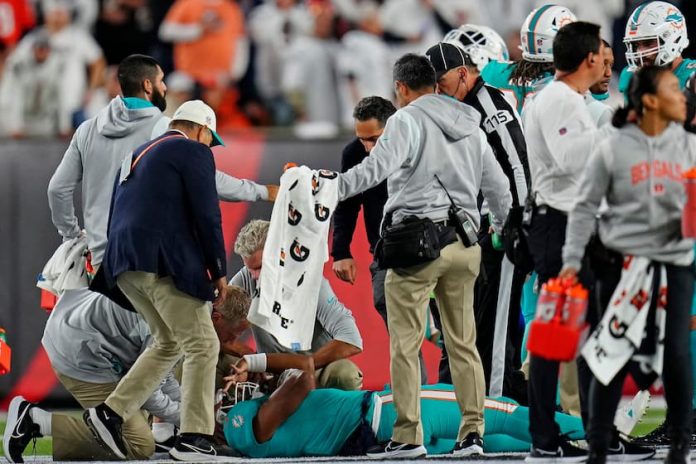 Tua Tagovailoa picked up a horrific injury in last night’s game against the Bengals after being sacked by defensive tackle Josh Tupou.

The Miami Dolphins quarterback has suffered head and neck injuries and was stretchered off the field during their 27-15 loss to the Bengals.

With around 6 minutes left to go in the first half Tua was sacked by Josh Tupou, and he remained motionless on the ground for several minutes in what were very concerning scenes for all involved.

Here is the whole sequence of #Dolphins Tua’s head injury.🙏🙏pic.twitter.com/hLDNims7xl

The Dolphins did announce that the quarterback was conscious, had movement in all his extremities and was taken to University of Cincinnati Medical Center for further evaluation. They also added that he would be released from the hospital and fly home with the team that night.

It was questionable all week whether Tua would play or not due to suffering from a sore back and ankle injury this week. This has prompted people to question whether he should’ve been involved in last night’s game in any capacity.

In the Dolphins victory against the Bills on Sunday Tua left the field briefly following a hit from linebacker Matt Milano, with what was first described by the Dolphins as a head injury. Following the game, the Dolphins said it was a lower back injury which was worsened from by the hit from Milano.

However, the NFL confirmed they were undertaking a joint review with the NFL Players Association into whether the league’s concussion protocol was followed. Following last night’s injury, the NFLPA released the following tweet.

Player health and safety is at the core of the union's mission. Our concern tonight is for Tua and we hope for a full and speedy recovery. Our investigation into the potential protocol violation is ongoing.

The Bengals staff will be under incredible scrutiny now until the investigation is complete. Players from around the league showed their support for Tua following the injury.

Prayers up for TUA! That is heartbreaking to see.