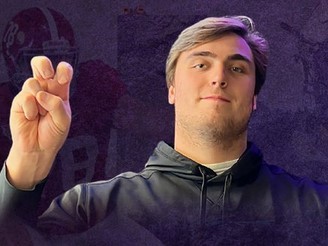 TCU have landed one of the most intriguing prospects from the college football transfer portal. Former five-star recruit Tommy Brockermeyer has committed to the Horned Frogs for the 2023/24 season. The 6-foot-5 305 lbs offensive tackle decided to move on from Alabama this offseason after not seeing much playing time.

Former five-star recruit Tommy Brockermeyer will look to strengthen the offensive line of TCU next season. The former Alabama tackle committed to the Horned Frogs on Tuesday after spending a couple of weeks in the NCAA transfer portal.

Brockermeyer is from Fort Worth, Texas and attended All Saints Episcopal there. In his announcement on Twitter, he accompanied a picture of himself with the caption, “I’m coming home!”

TCU beat out rivals Texas for the commitment, where Brockermeyer had strong family connections. Brockermeyer’s father, Blake was an All-American tackle for the Longhorns. Additionally, Tommy’s brother, Luke is currently the starting middle linebacker at Texas. However, that was not enough to capture the commitment of the young tackle.

Instead, Brockermeyer will team up with head coach Sonny Dykes, who has guided this year’s version of the Horned Frogs to the College Football Playoff.

Brockermeyer will be hopeful of receiving more playing time than he has under Nick Saban. After redshirting in 2021, he has played only 19 snaps in 2022.

He becomes the fourth player to transfer to TCU from the portal this season. He joins Alabama teammate, wide receiver, Jojo Earle, wide receiver Jack Bech and cornerback Avery Helm.

The Horned Frogs currently have a top-ten transfer portal ranking and will seek to continue to improve. However, next season may prove more of a challenge for TCU. Quarterback Max Duggan has announced that he will declare for the 2023 NFL Draft.

TCU also currently has 27 high school recruits that will join the team for the 2023/24 season in a top-20 recruiting class.