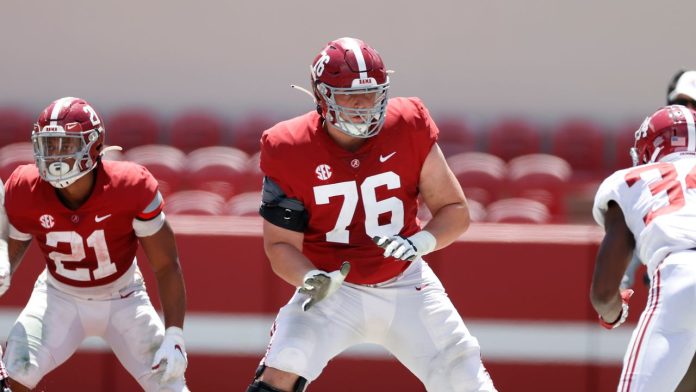 One of the top recruits in last year’s high school class has entered the NCAA transfer portal along with several of his college football teammates. Alabama’s Tommy Brockermeyer and four other linemen from the Tide announced they were entering the portal on Tuesday. Brockermeyer was the second ranked player in ESPN’s high school recruiting rankings last year. He joins Javion Cohen, Amari Kight, Damieon George, and Tanner Bowles in the portal.

Five-Star lineman moving on from Tuscaloosa

The top rated tackle in the country out of high school last year will transfer from Alabama after he entered the transfer portal on Tuesday. Offensive tackle Tommy Brockermeyer appeared in just two games for the Tide in 2022, retaining his redshirt.

The 6-foot-5 inch, 305 lbs freshman from Fort Worth, Texas was highly recruited in high school. He received 25 offers from schools including Georgia, Clemson, and Michigan. Ultimately, Brockermeyer committed to Alabama with his twin brother, but it seems that move has not quite worked out how he would have hoped.

Brockermeyer is sure to be a hot commodity in the portal, and won’t lack interest from high-profile schools. However, a potential destination for Brockermeyer could be Texas.

Brockermeyer’s father, Blake was an All-American tackle for the Longhorns. Additionally, Tommy’s brother, Luke is currently the starting middle linebacker at Texas. That Texas lineage runs strong, but whether it will be enough to lure another Brockermeyer to their midst remains to be seen.

As of Tuesday, Alabama had 12 players enter the transfer portal.