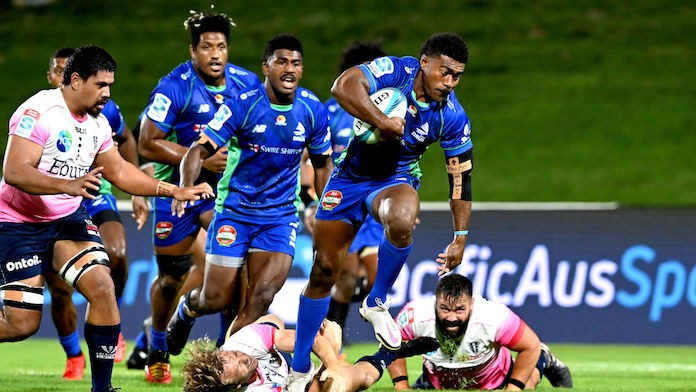 We’re now deep into the Super Rugby season, and the Brumbies have already opened up a decent lead. But can any of their opponents narrow the gap in round 6? Or will the boys from Canberra gain an even bigger chokehold on the league?

If you’re thinking about betting on Super Rugby, you’ve come to the right place. Check out our Super Rugby tips and predictions below, before you head off to your sportsbook and make your wagers.

Moana Pasifika currently sit at the bottom of the Super Rugby table, although they have played just two games. The Hurricanes are doing somewhat better, with two wins from their three matches.

As you might imagine, the winless Moana Pasifika are huge underdogs with the bookies, while the Hurricanes have tiny odds. However, betting on anything other than a Hurricanes win would be throwing your money away, so take them for the win at 1.02 with BlueBet.

This looks like being the most closely fought contest of the week. Fijian Drua come into this game on the back of a agonisingly close loss to the Force, while the Rebels lost last week to the Waratahs.

The bookies are giving both teams almost identical odds, but we’re going to predict that the Fijian Drua will take the win. Quite simply, they’ve been the more impressive team this season, while the Rebels are winless so far. Take the Fijian Drua at 1.91 with BlueBet.

The Brumbies are already establishing themselves as the big dogs this season, having won five out of five so far. The Force, on the other hand, haven’t been quite as good, only managing two victories from their five games.

It’s not the most daring of bets, but everything points towards the Brumbies easily beating the Force in week six. You’ll only get low odds on the Canberra team, but we can’t see any result other than a Brumbies win. Back them at 1.30 with BlueBet.

Force vs Brumbies tip: Brumbies to win @ 1.30 with BlueBet

The Highlanders have been pretty awful this season, currently sitting in 11th place with just one point from their four matches. The Blues have been considerably better – they have nine points, despite only having played three games.

The Highlanders really need to do something to kickstart their season, but this won’t be the match to do it. The bookies have the Blues as huge favourites for this all NZ clash, and we have to agree with them. You can back the Blues at 1.33 with BlueBet.

Highlanders vs Blues tip: Blues to win @ 1.33 with BlueBet

This looks like being a fantastic battle between two closely matched sides. The Chiefs enter the game on the back of a heavy victory over Moana Pasifika, while the Crusaders had their last match postponed.

The best marker for this match is the previous encounter between the two, which was only in week four. The Chiefs came out on top in that one, and we predict they’ll do the same this week. You can back the Chiefs at 2.00 with BlueBet.

Chiefs vs Crusaders tip: Chiefs to win @ 2.00 with BlueBet

The final match of round six sees the Waratahs travelling to play the Reds. Last time out, the Reds lost to the table-topping Brumbies, bringing their unbeaten record to an end, while the Waratahs overcame the Rebels.

While this could be a close match, we’re backing the Reds to bounce back from their loss to the Brumbies and take the win. Fail to win and the Waratahs will leapfrog them and take second place. Bet on the Reds at odds of 1.29 with BlueBet.