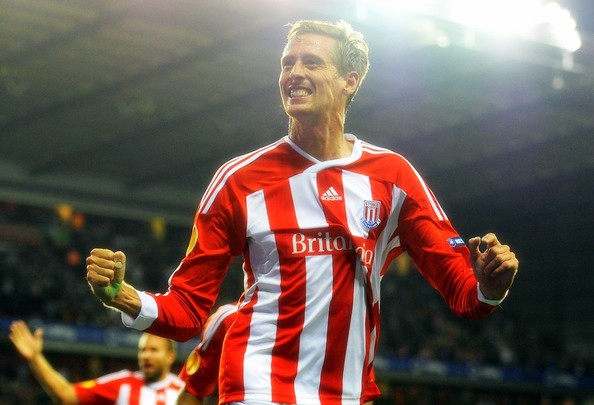 Stoke City continue to impress in their debut European season, as a 2-1 win over Maccabi Tel Aviv in Israel on Thursday night sees Tony Pulis’ side on the brink of qualification from Group E of the Europa League.

Second half goals from Dean Whitehead and Peter Crouch gave the visitors the three points, and one more positive result will see The Potters progress.

The introduction of Crouch for Jonathan Walters on the hour mark shows the strength in depth that Pulis now can call upon, and the England international got the all-decisive match winning goal. Soccer stats show the lanky hitman’s eye for goal in Europe; he is now the Britannia Stadium club’s top goalscorer in the tournament, and despite struggling domestically last season for Tottenham, scored some integral goals on the continent for Harry Redknapp’s men.

Stoke’s heroics are made all the more impressive by the group that they have been dealt, with Besiktas and Dynamo Kiev both seasoned European competitors. The fact that all three other pool sides are based in Eastern Europe means that Pulis’ men have had to overcome the travel aspect of the games, which so far has not been a problem.

The key to beating Tel Aviv in Israel was Stoke’s domination of the midfield, with the returning Wilson Palacios, Salif Diao and goalscorer Whitehead grasping the game by the scruff of the neck and foiling the home side’s attacks. Despite Tel Aviv being the weakest side in the group, travelling to play in Israel is never an easy feat, given the geography and atmosphere at the game.

The effort of the Stoke players showed exactly how much they wanted to win the tie, and this is refreshing given other clubs such as Spurs fielding weakened teams in the tournament.

“I thought the lads were brilliant tonight.

“The balance looked good. There was a bit of a lapse at the end but that’s a little bit of tiredness I think. I’m very pleased. They huffed and puffed a little bit but I thought we coped with it smashing.”

Stoke must now be careful not to let their European efforts hinder their English Premier League form, as after the previous four games in the Europa League, Tony Pulis’ men have lost the next domestic match and most recently this Sunday at the Reebok Stadium where they lost 5-0 to Bolton.