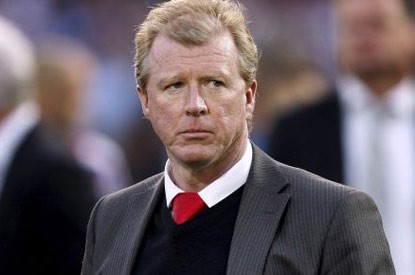 Steve McClaren has been appointed as Derby County manager on a two and a half year deal.

For many, Steve McClaren is a figure of immense mirth, a perpetual punchline, a running joke. Some even conspiratorially suggest that he was created in a test tube by Sven Goran Eriksson in the early autumn of 2004, composed by the combination of the inscrutable contents of frothing conical flasks to create a successor who would flatter the Swede’s legacy.

There are three reasons why McClaren prompts chuckles and chortles.

First was the preposterous decision for him to use an umbrella during a football match six years ago. This earned him the rhythmic moniker ‘the wally with the brolly’. McClaren has been damned by a choice to use an umbrella to shield himself from torrential rain. Surely the mark of a madman, a fool, one unequipped for leadership, that he should elect to appropriately deploy such a tool in order to prevent himself being uncomfortably drenched during a deluge.

The second concerns an interview in which McClaren spoke English with a Dutch accent. Admittedly McClaren’s August 2008 ‘Shteeve McClaren’ incident was embarrassing. He shouldn’t need a defence here – a single, brief incident of unfortunately televised idiocy shouldn’t be taken as an effective indicator of his ability to craft a promotion-winning Derby County in the Championship over five years later. It should probably just be accepted as an error and no effort at expiation should be made. Yet, there is legitimate reasoning behind his verbal gymnastics. McClaren had been surrounded within English-speaking Dutchmen. He was new to the country and to his job. Studies have demonstrated the existence of a psychological process of ‘convergence’ wherein we naturally imitate the accents, tone and volume of the speech of others whom we seek to influence. This understandable human effort to establish similarity is complemented by another phenomenon, noted in a 2010 study (Adan, Bekkering and Hagoort) in Psychological Science, a journal of the Association for Psychological Science, which ‘suggests that imitating someone who speaks with a regional or foreign accent may actually help you understand them better’. So McClaren was just engaging in natural processes of acculturation and the construction of social bonds in an unfamiliar environment, admittedly with quite hilarious results.

So having addressed two of the fundamental reasons why he is derided- his desire not to be sodden with rain, and an engagement in a routine process of verbal convergence, we move on to the third. This is the most relevant in an appraisal of his success – past performance.

McClaren has managed Middlesborough, England, FC Twente, Wolfsburg (twice) and Nottingham Forest. He has worked as assistant manager with Oxford, Derby County, Manchester United and England. His coaching career has extended over 21 years. Yet these two decades are distilled into a single epithet which trails his every move: ‘former England boss’. Or else, ‘national team failure’. Or possibly ‘an insult to Churchill, St. George and all that is good in the world’. They’re interchangeable.

It must be recognised that not every manager pads through their careers with lotuses blossoming under their every step. Nearly all enjoy mixed success. We compare against the careers of Pep Guardiola, Alex Ferguson, Jose Mourinho, but these are an unfair yardstick against which to measure. Managerial success depends not upon a scientific formula which will deliver inevitable success, but a concatenation of circumstance: perhaps forgiving fans, a generous board, a motivational moment which may inspire a particular player, a coaching technique, and a generous contribution of caprice. McClaren did fail in his endeavours with the English national team. His time at Wolfsburg, when he inherited the burden of managing a team who had over-performed unrepeatably in the previous season to win the Bundesliga title, was also unsuccessful. His time at Nottingham Forest lasted for only 112 days before he resigned, confounded by the internal politics of the Midlands club, where an anachronistic committee still oversee transfer policy.

There have clearly been unsuccessful periods in his career.

Yet there have also been periods of clear success.

McClaren led Middlesbrough to the UEFA Cup final in 2006. Re-read that sentence. McClaren took the Middlesbrough to a major European final. Middlesbrough. It was a team he had nurtured, founded upon a core of young, local players reared from their prodigious academy: Stuart Parnaby, Chris Riggott, James Morrison, Stuart Downing, Brad Jones, Matthew Bates, Andrew Davies, Andrew Taylor. This core of players was then embellished with a smattering of foreign players: the likes of Viduka, Hasselbaink, Mendieta and Yakubu. His 2004 League Cup victory was the first major honour in the Teeside titan’s history. He was generously resourced by Steve Gibson, but numerous other managers have utterly failed even when well-financed. And he was criticised as achieving only mediocrity in finishes of 12th, 11th, 11th, 7th and 14th. Yet this was a period of seemingly immutable ‘big four’ stability in which the highest echelons of the league were impregnable (Everton’s ephemeral dalliance aside). Expectations ballooned and he was judged unrealistically. Middlesbrough’s fans became bored with the stability he offered. Last season Middlesbrough finished in 16th in the Championship.

His other period of success was during his Dutch exile. McClaren showed bravery in taking over at Dutch club FC Twente in 2008. Most British managers prefer to comfortably descend down the divisions in search of employment. Instead McClaren ambitiously took on a job abroad. And whilst there, he won the first Eredivisie title in the team’s history. He inherited a successful team, but added expertly. He signed Cheick Tioté, a then teenage Luuk de Jong and Bryan Ruiz. The Costa Rican has fluttered and promised and threatened to blossom at Fulham, but has failed to achieve the consistency which McClaren achieved from him in 2009/10 when he notched 24 goals. Similarly, ‘Macca’ (as someone presumably calls him) coaxed excellence from Miroslav Stoch, who has since failed to repeat the form of this season. This was a consistent and relentless Twente team who won sixteen of their seventeen home games in their 2009/10 title-winning season. And this was not in the absence of competition: the Ajax team of that season bulged with stars and luminaries: Maarten Stekelenburg, Gregory van der Wiel, Jan Vertonghen, Christian Eriksen, Miralem Sulejmani, Siem de Jong, Toby Alderweireld. Oh and Luis Suarez, who was voted Dutch Footballer of the Year that season and equalled the record for most goals scored by a foreigner in an Eredivisie season.

Steve McClaren’s failings linger prominently in the memory, they roll off the tongue, and more than anything, they summon the image of a demoralised man clutching a rather over-large FA golf umbrella. But they shouldn’t – he has a résumé which demonstrates that he could be a great success at Derby. This isn’t to say that he will – its a highly unpredictable league in which a smattering of single moments can separate a play-off position from relegation. But winning Middlesbrough’s only ever major trophy and the only title in Twente’s history provide evidence enough that he doesn’t deserve the ridicule.