Celtic and Rangers will clash in the Scottish League Cup final next month, and a lot is at stake.

The Hoops will look to keep their dreams of a fourth consecutive domestic treble alive by beating their bitter rivals to the first silverware on offer for the season, while Steven Gerrard’s Rangers will be very motivated to stop the dominance of their rival.

Celtic boss Neil Lennon will hope he has a fully-fit squad for the game given his lack of striking options.

Frenchman Odsonne Edouard is the Bhoys’ only fit striker at the moment, but Leigh Griffiths could be available after recently returning to training.

The Celtic star hasn’t played a game since the 3-1 win over Hearts back on August 25, but could be available this week, and his son is hoping he scores in next month’s League Cup clash with Rangers.

He wrote a letter to his dad and couldn’t stop himself from mocking the Light Blues.

Here are the wordings of the letter as shared by Leigh’s girlfriend, Linzi McCartney on Instagram:

“To dad from Rhys.

“Dad I hope you start playing in Celtic I hope you play in the final.

“I hope you score one and if you do score a goal for your celebration do take the L for losers for Rangers. They are already losers. 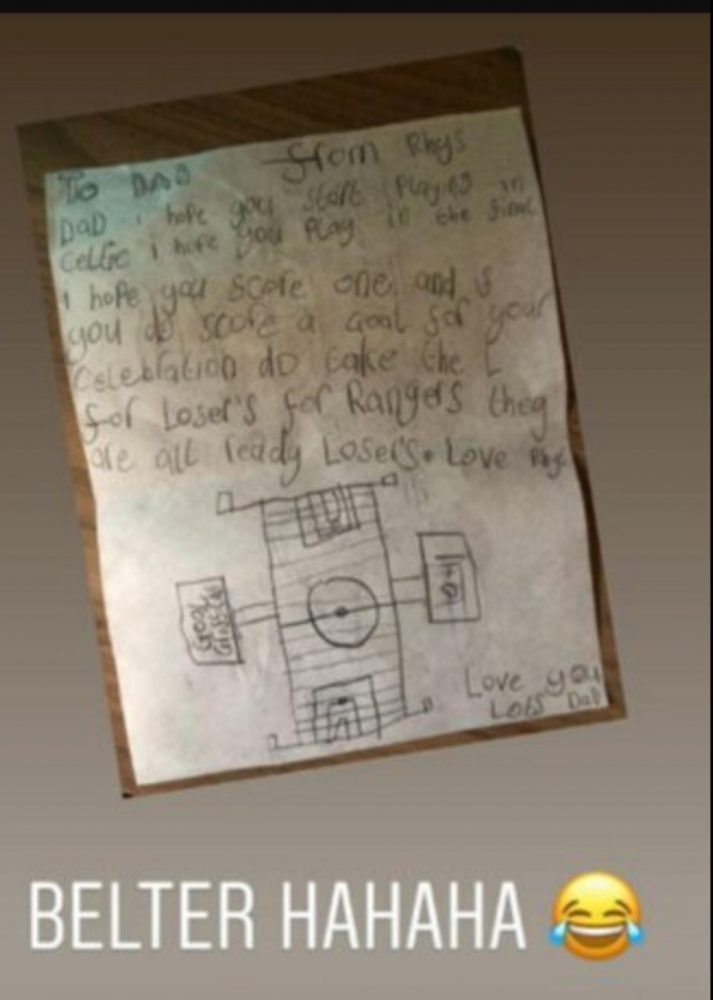 The 29-year-old has two goals in four appearances for Celtic this term, and could make his fifth appearance when his side visit Lazio in the return leg of their Europa League clash on Thursday or against Motherwell at the weekend.