Compared to their defiant effort against Brazil, North Korea were sloppy at the back. Portugal’s fifth and sixth were gifted by defensive errors. Several of the others were the products of loose marking.

That being said, for the opening half hour they played with the confidence of favourites. They attacked with pace and created a couple of great chances.

At last, reason for optimism

Portugal were poor in qualification and poor against the Ivory Coast. Today, however, the passing and movement of their midfield was impressive; compare this with Italy’s performance against NZ on Sunday, where their midfield could do little more than pile crosses into the box. While Ronaldo was excellent in the second half, Queiroz will be pleased that the side did not rely on him alone to carry their attack.

Portugal needed something to settle the nerves: Meireles’ slick finish provided that. 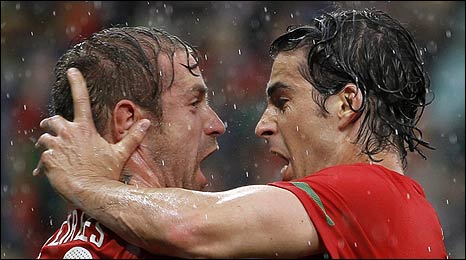 “If you score more goals like that I’ll have to kiss you!” “OK!”