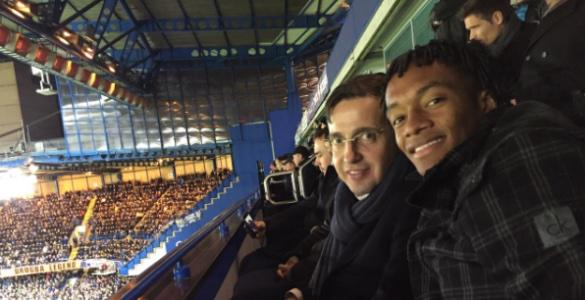 Chelsea maintained their five point lead at the top of the Barclays Premier League table after the Blues earned a 1-1 draw with Manchester City on Saturday at Stamford Bridge.

On the stands was Chelsea’s would-be-new January signing Juan Cuadrado, who travelled to London yesterday for a medical.

The Colombian international would join on a reported fee of €35m in a deal that will see Chelsea winger Mohamed Salah joining Fiorentina on loan for the rest of the season.

Chelsea have recouped a major chunk of the transfer fee paid for Cuadrado by selling Andre Schurrle to Bundesliga outfit Wolfsburg.

We have the picture of Cuadrado being spotted at the Bridge yesterday, with photo courtesy: @Chelsea News