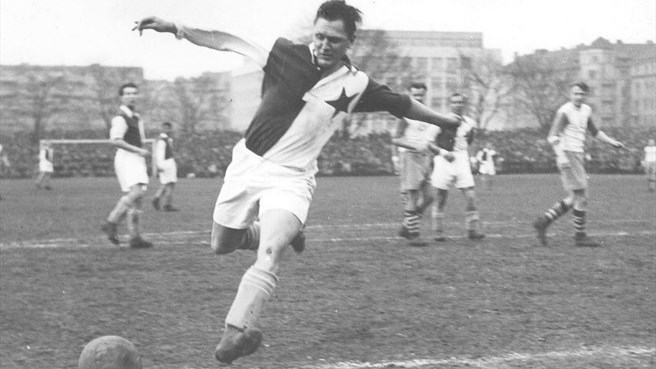 On this day in 2001, footballing legend and former Rapid Vienna and Slavia Prague forward Josef Bican passed away at the age of 88.

According to the Rec.Sport.Soccer Statistics Foundation, Bican scored 805 goals in competitive football and 1468 overall, making him the most prolific striker in the history of professional football.

Born in Vienna in 1913, Bican joined Rapid Vienna in 1931 where he scored an impressive 184 goals in 144 appearances in all competitions. His frighteningly prolific record continued when he joined Admira Wacker Modling in 1935 where he put away 119 goals in 85 appearances.

He moved to Slavia Prague in 1937 and would stay there throughout the course of the Second World War. Bican’s record for the Czech club dwarves that of Cristiano Ronaldo and Lionel Messi for Real Madrid and Barcelona, respectively. In 427 appearances for the club, he scored a mind boggling 832 goals.

On this day in 1993, Sao Paulo beat AC Milan in Tokyo to win their second consecutive Intercontinental Cup.

European Cup winners Marseille were supposed to play Sao Paulo for the Cup but the French club were banned from participating because of a match fixing scandal. Therefore, runners-up AC Milan took their place instead.

Played in front of 52,275 fans at Tokyo’s National Stadium, Palhinha opened the scoring for the Brazilians before Daniele Massaro equalised shortly after the half-time interval. Sao Paulo’s lead was restored around the hour’s mark by Toninho Cerezo but Jean-Pierre Papin scored in the 81st minute to bring the scores level yet again.

This was Sao Paulo’s second Intercontinental Cup on the trot after beating Barcelona 2-1 in the previous year.