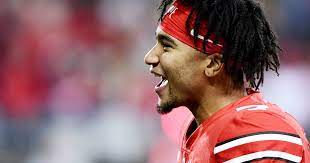 Week six is in the books and college football season is in full swing. Here we take a look at our offensive team of week six which is led by Ohio State quarterback CJ Stroud.

Ohio State took care of Michigan State convincingly on the weekend. It was in no small part to the performance of our leader of the College Football Team of the Week, CJ Stroud. Stroud threw for 361 yards with six touchdowns and put the Spartans away.

The Buckeyes are now ranked number two in the country after leapfrogging Alabama as a result of this convincing showing.

Israel Abanikanda put on a show against Virginia Tech on Saturday. Rushing for no less than SIX touchdowns, Abanikanda was easily the best running back of the week. He went at 8.9 yards per carry for 320 yards.

It is the best single game performance of any running back this college football season and would have raised eyebrows from scouts and executives around the nation. 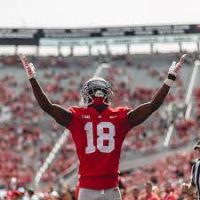 There were some monster performances from wide receivers this week and narrowing it down to three was tough.

Chimere Dike had a big week in Wiscosin’s win versus Northwestern. Dike had 10 receptions for 185 yards while adding three touchdowns. It looks like the junior has finally found some sort of connection with quarterback Graham Mertz.

Not to be outdone, Ole Miss’ Jonathan Mingo went ballistic himself. 247 yards and two TDs for Mingo helped Ole Miss beat Vanderbilt. Jaxson Dart found Mingo on 71 AND 72 yard touchdowns in the second half to help seal the deal in the win.

Marvin Harrison Jr. hooked up with CJ Stroud and found the endzone three times against Michigan State. The Buckeyes wide receiver, who went for 131 yards, has been drawing rave reviews for his play this season. This is his third 100 yard game and he already has nine touchdowns.

Mayer was excellent in the Notre Dame victory over BYU. He racked up 11 receptions for 118 yards and two touchdowns. He is likely the best tight end in the 2023 draft and it showed in this performance.

Mocks currently have Mayer anywhere from mid-to-late round one to end of round two. However, performances like this will see him shoot up draft boards around the NFL.