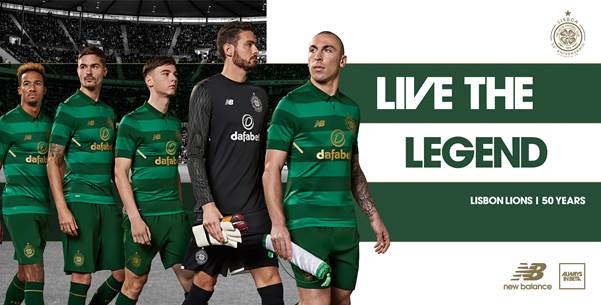 New Balance Football have finally unveiled the Celtic away shirt for the 2017/18 season.

Inspired by that incredible night in Lisbon, we introduce the #inVIncibles’ new 2017/18 @NBFootball Away Kit. #CelticFC #LiveTheLegend pic.twitter.com/P8Wv6yVs5D

The new kit will be a part of the ‘Live the Legend’ campaign, celebrating the club’s 50th anniversary year.

The away kit upholds the theme of the Lisbon Lions team and it comes with a Verdant and Eden Green hoop design with the gold branding of the manufacturer and the sponsor.

The shirt also comes with a woven buttoned collar and gold trim shoulder seam that pays a tribute to the anniversary of the famous European win. There is also a special 50th-anniversary gold crest.

Inter Milan and Celtic were the finalists of the 1967 European Cup and the shirt will feature stripes from both clubs. The inner back neck of the kit will have the green and white hoops of Celtic and the black and blue stripes of Inter Milan.

As far as the technology is concerned, the shirt features bonded vents and zonal mesh structures for advanced cooling. Also, there are moisture-activated laser cut vents in the underarm regions that open in case of increased perspiration.

The away kit comes with Eden green shirts and dark green socks. The footbed of the socks have been developed with polypropylene to alleviate excess moisture.

The goalkeeper kit has an all black design with a white crest. It is completed by the tonal three colour sleeve pattern.

Speaking to the media during the launch, Celtic defender and Scotland’s Young Player of the Year Kieran Tierney said: “I really like the dark green hoops on the shirt and shorts on this years’ away kit, we will wear it with pride when away from Celtic Park this coming season. As a Celtic player and fan, it’s great to see the club commemorate the Lisbon Lions on the shirt too.  The Lions are our greatest ever team and they fully deserve this recognition in such a special year for the Club.”

Definitely getting both home and away. Well done on two amazing strips ?

My first kit as a kid was the 67 all green kit. Great to see it return.

Celtic’s new away kit is unreal ?

That is a very classy design

You guys have knocked it out the park this year with both LFC and Celtic..

“Uck, i don’t buy football tops anymore. They are too expensive”

*Celtic release their new home and away kits for 17/18* pic.twitter.com/YUtK949THr