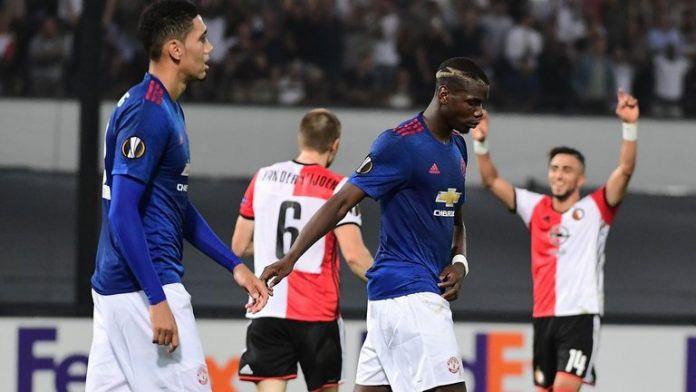 De Kuip was under-capacity for Feyenoord’s first group stage game of the Europa League but what it lacked in numbers was made up for by a famous continental win over Manchester United.

Jose Mourinho was right to admit post-match that United didn’t play well over the course of the 90 minutes and now has his work cut out to restore the morale of his players after back-to-back losses against Manchester City in the league and now in Europe.

But it felt the loss—United’s fourth successive on the road in Europe—was more of Mourinho’s making than anything else. Setup in his vintage 4-2-3-1 formation, there was a look of freshness in the line-up as Paul Pogba partnered Anthony Martial, Juan Mata and Marcus Rashford in attack.

But that was only to be on paper as United lacked adventure going forward and were rather content to sit back than take a more proactive approach. Rashford stayed isolated up front, Pogba dropped back in search of the ball and Martial played as if he were a second left-back. 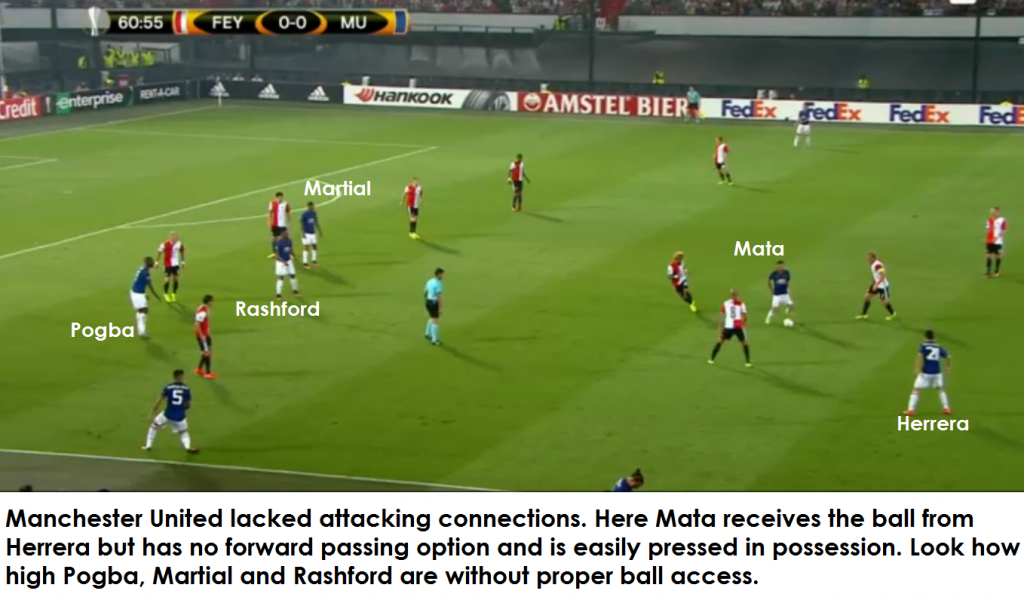 It was typical of a Mourinho side that had defensive control and depended on bursts of individual brilliance from forwards to create chances. Feyenoord weren’t top quality continental opposition on this occasion, and as Owen Hargreaves summed up, United showed too much respect for their Dutch opponents.

Hence the disappointment from Mourinho after the game as he believed his team deserved more than a loss. Feyenoord were themselves uninventive on the ball; the hosts had plenty of time on the ball in build-ups, but lacked incisiveness and pace up front to trouble United’s defence. 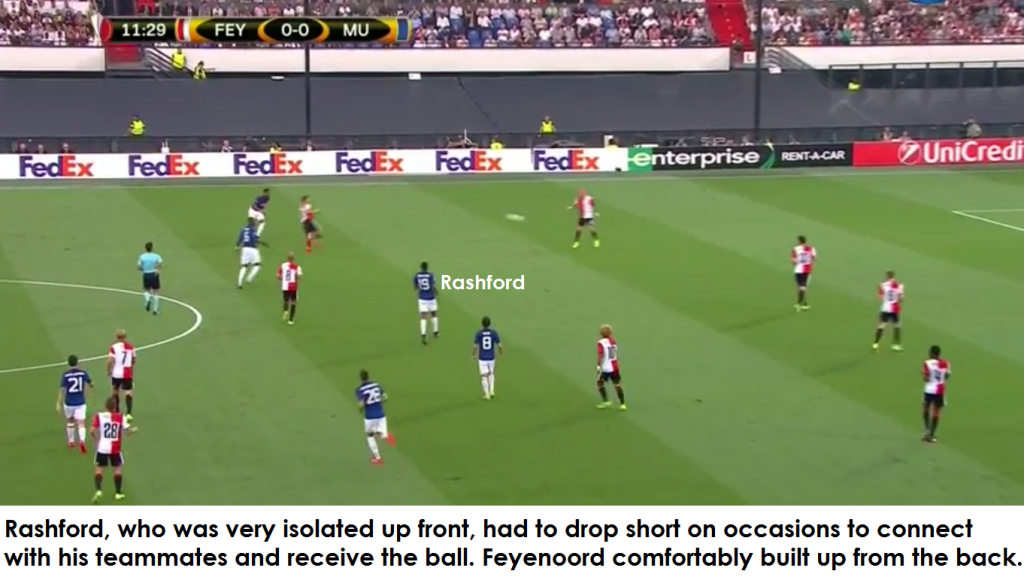 “I know the situation is not a case of clicking your fingers and everything is perfect, but to be honest I think we didn’t play phenomenal matches in these two defeats but to lose both I think is a punishment for the team because I think we deserved more,” said an aggrieved Mourinho as he put yesterday’s loss in perspective to last weekend’s defeat to City.

Pogba, who should’ve been the connection from back to front in an advanced central role, struggled to make an impact and only after desperation set in in the game’s latter stages United built more access with Zlatan Ibrahimovic coming on.

“He was like the team. In the first half, they were in control, but they were playing half-pace,” was Mourinho’s assessment of record signing Pogba.

It became a night to forget for the Red Devils faithful when Tonny Vilhena took advantage of United pushing forward in numbers to cleanly finish Nicolai Jorgensen’s square pass after the forward escaped an offside call.

United are away to Watford on Sunday – another defeat – third in a row following Thursday and last weekend’s loss to Manchester City – could very well spell a premature end to their quest for trophies before September is over.
Other talking points

1. Elsewhere, it was a night for Esteban Cambiasso and Milan Baros to turn back the clock as the two veterans netted for Olympiakos and Slovan Liberec respectively. Cambiasso’s goal handed the Greek champions a 1-0 win over Young Boys of Switzerland while Baros’ goal was only enough for a draw against Qarabag for Slovan.

2. Maccabi Tel Aviv and Zenit St Petersburg produced the most entertaining game of matchday one as drama ensued in Netanya after a quiet first half. Zenit were 3-0 down heading into the final quarter hour of the game before scoring four goals in 14 minutes to complete an unlikely comeback. The Russians, Europa League winners in 2008, were helped by the sending off of Maccabi right-back Eliazar Dasa late in the game with the score at 3-1.

3. Southampton were the other Premier League club in the Europa League group stages and they made light work of Sparta Prague at St Mary’s with a 3-0 win. Charlie Austin netted a brace for the full-strength Saints and Jay Rodriguez scored his first European goal to complete the rout.

4. Out-of-sorts Inter were handed a humiliating 2-0 reverse at the hands of little-known Israelis Hapoel Be’er Sheva. Frank de Boer’s start in the Nerazzurri hot seat has been nothing short of tumultuous and having spent heavily in the transfer window, a loss at home to the second lowest ranked team in the group stages has ramped up the pressure on the Dutch boss.

5. Talking of low ranks, League of Ireland’s Dundalk are the lowest ranked club in the Europa League proper this season and the Lilywhites gave a good account of themselves against AZ Alkmaar as a late Ciaran Kilduff goal handed them a creditable 1-1 draw after seeing their captain Stephen O’Donnel sent off in Alkmaar.

6. St Etienne’s Robert Beric has become a late goals specialist after another goal in the dying stages snatched a 1-1 draw off Mainz. Beric’s 93rd minute equaliser denied Paris Saint-Germain a win last weekend and his only other goal this season came in the 85th minute against Montpellier in Ligue 1. Beric is truly your man for some late drama.