Manchester United are planning a double raid on Fiorentina as manager David Moyes looks to snap up Juan Cuadrado and Borja Valero from the Italian side in the summer.

Reports in Italy claim that United had sent scouts to the Stadio Artemio Franchi on Sunday. The young Columbian did not disappoint as he scored on the night in his side’s 2-1 win over Udinese.

Cuadrado is an immensely versatile player can draft in either as a right winger striker or a wing back. Moreover his dazzling dribbling ability, raw speed and anticipation in defense in an added bonus. 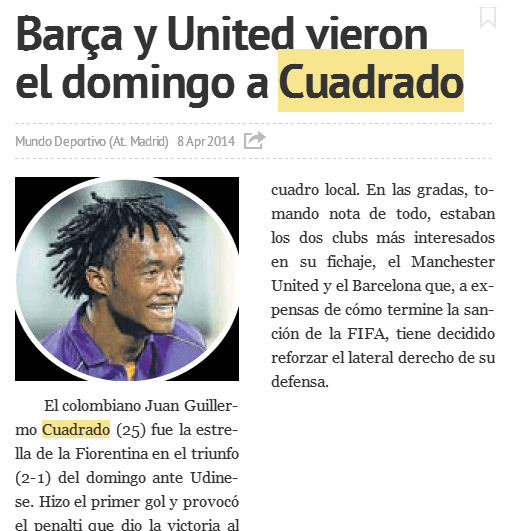 Wing-play is one of the areas where no other British club probably have given more emphasis to than Manchester United, throughout their history. However, despite having an avalanche of wingers at disposal, apart from Antonio Valencia (though he can’t say his form has been excellent) none other wingers have performed well this season.

So, there is every possibility that Moyes might sign one of two good wingers in the summer and Cuadrado could be be one of them.

However, as often with the cases in dealing with transfers in Italy, The Red Devils could face problems in concluding the business smoothly as he is currently co-owned by Udinese and the Viola.

The Spaniard struggled with struggled during his first spell in the Premier league with West Brom but after fruitful loan spells with Real Mallorca and Villareal, the Spaniard has grown in confidence and become one of Fiorentina’s unsung heroes this season.

Spanish newspaper AS claim that Barcelona are also after the 29 year old who can play anywhere in midfield.

David Amoyal, Football pundit for the Serie A also believes Valero would be a hit for United.

@tc917 I haven’t heard that at all, but if I was United that is the player I would want- just perfect for them. Great player