Benfica defender Victor Lindelof was heavily linked with a move to Manchester United during the January transfer window.

According to the latest report from Portuguese newspaper, O Jogo, Manchester United were very close to signing the player in January and the Red Devils will make their move once again at the end of this season.

The 22-year-old centre-back was expected to sign for the Old Trafford outfit in January after reports emerged that the Premier League giants had agreed on a fee with Benfica for the player. However, the move never materialised back then. 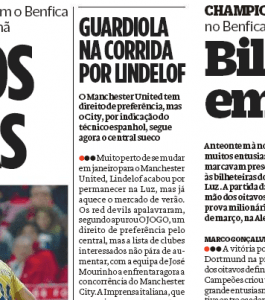 Lindelof is apparently a target for Manchester City as well. If O Jogo‘s claim regarding the first refusal is true, the Old Trafford outfit have a significant advantage here.

The Swedish defender is regarded as one of the most talented young defenders in Europe right now and is already a key player for his club and country. He could be the ideal partner for Eric Bailly. Lindelof can operate as a centre-back as well, as a right back, and will be expected to lay the foundations of a rock-solid defence alongside Bailly and Shaw for years to come.