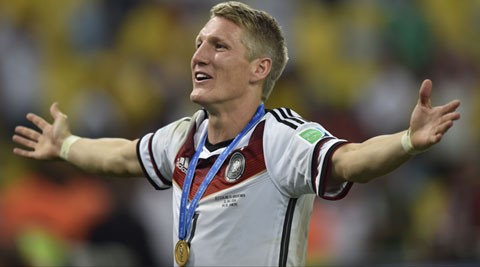 Manchester United’s bid to sign a world-class central midfielder this summer has been successful. According to the extremely reliable German source BILD, Bastian Schweinsteiger’s move to the Red Devils is imminent within the next few days.

The Bayern Munich legend will sign a three-year deal at Old Trafford for a fee between €18 and €20 million. He will earn around €10 million per year in wages, which comes down to around £140,000 per week.

Schweinsteiger has been a Bayern player since 1998, when he was just 14 years old. A regular in the first-team for the last decade, the midfielder made exactly 500 appearances for the Bavarians, winning 8 Bundesliga titles, seven German Cups and one Champions League. He is also the captain of his national side, earning over 100 caps for Germany and playing a key role in their World Cup win in Brazil last year.

Schweinsteiger was an absolute star at the Allianz Arena, but ever since Pep Guardiola took over at the club in 2013, there have been signs that he is unwanted. After talks with the club’s Chairman Karl-Heinz Rummenigge, the 30 year-old asked for a a release and a subsequent move to the Premier League.

In what will surely be his last stint at a major European club, there is no one better for Schweinsteiger to play under than an old friend and mentor like Louis van Gaal. The Dutchman managed Bayern between 2009 and 2011, with Schweinsteiger being one of this most important players. Now at United, Van Gaal desperately needs a top-quality player in the centre of the park. With Michael Carrick out for most of last season through injury, the Red Devils struggled for the combination of creativity and aggressiveness in that department. This is how BILD suspects United will line up with Schweinsteiger in the side: 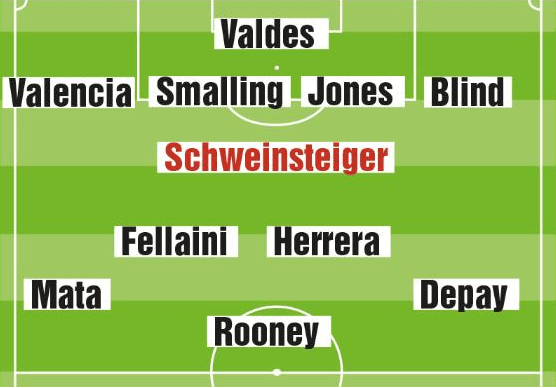 Morgan Schneiderlin from Southampton was deemed the perfect fit, but that deal has gone flat in the past few days. Whether Schweinsteiger can, at this stage in his career, adapt to life in the Premier League, remains to be seen. This fan is sceptical as to whether he is exactly what United need:

Seems there’s concrete interest in Bastian Schweinsteiger which is great news. However, not quiet RE Schneiderlin. Hoping for both.

However you look at it though, having a player with the experience and winning mentality of Schweinsteiger is always going to be helpful for any side. United still have to make some more important signings to challenge for the title next season, but this is certainly a step in the right direction.