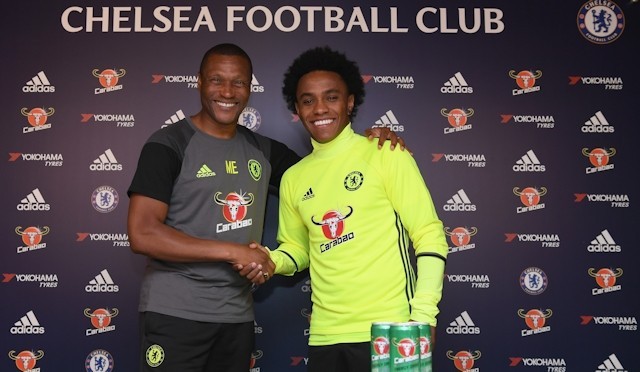 José Mourinho is expected to strengthen his Manchester United side during the January transfer window, and the latest name linked with a move to Old Trafford is that of the Chelsea midfielder Willian.

The Brazilian ended up being Chelsea’s Player of the Year under Mourinho last season, and the Portuguese manager is apparently eyeing a reunion at Old Trafford.

Daily Star have published an exclusive claiming that Mourinho will launch a bid for the Chelsea midfielder when the window reopens. Willian has fallen out of favour under Antonio Conte, and it seems that Mourinho is ready to take full advantage of that. Injuries and family issues have restricted the Brazilian’s chances this season, and Pedro seems to have established himself as a first-choice starter in that time.

The 28-year-old signed a new four-year contract with Chelsea back in July, and it makes no sense for Chelsea to let him go midway through this season. Even if the Blues agreed to a sale, United would have to pay over the odds for the player. Daily Star adds that Willian is valued at £40m.

Despite Willian’s obvious quality, Mourinho will find better options in the market if he wants to pay a premium. Also, it is important to remember that Manchester United need a defender much more than another attacking midfielder. The likes of Mata and Mkhitaryan are both better than the Brazilian in that position.

Willian has not started for Chelsea in the Premier League since the beginning of October, and the Brazilian will need to work hard to get back into the side. No manager likes to change a winning team. The 28-year-old will have to be patient.