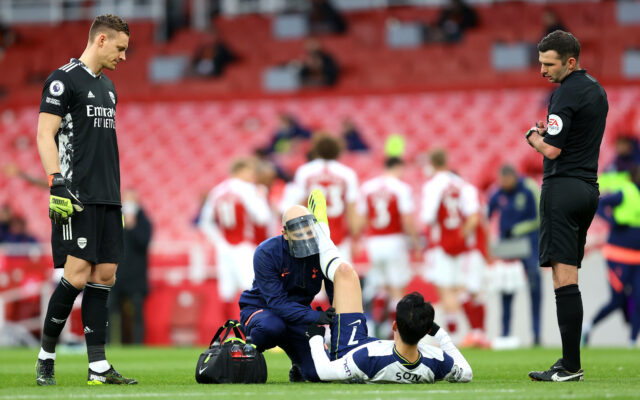 Jose Mourinho has suggested that Son Heung-Min could be out for a while.

The South Korean international suffered a muscle injury during Tottenham’s 2-1 defeat against Arsenal in the Premier League on Sunday.

Son was replaced by Erik Lamela during the match, who had an eventful outing. The Argentine opened the scoring with a rabona, and he was also given the marching orders after picking up two yellow cards.

When Mourinho was asked to provide an update on Son’s injury, he said that it’s a ‘muscular’ injury, and more often than not it takes time to recover.

“That’s football- I don’t know how long it is,” he said. “Is muscular. Muscular is always not easy. He’s a guy that normally he recovers very, very well from any kind of injury. And that’s football. That’s accumulation of matches,”

“In Europa League, I gave him 30 minutes rest, so 90 minus 30 is 60, but 60 is still 60. And when you are in so many competitions, some players they have more minutes than others, which is normal, something that can happen.”

The 28-year-old has been in outstanding form this season. He has scored 17 goals and provided 10 assists in all competitions for Spurs, and his absence will be a big blow for the north Londoners.

Spurs do have a wealth of attacking options on their ranks. The likes of Lamela, Lucas Moura, Dele Alli, Gareth Bale and Steven Bergwijn are all capable of filling the void.

Meanwhile, Son has been selected by South Korea to face Japan in an international friendly to be held later this month.

In other news, Jermaine Jenas has suggested that Gareth Bale wasn’t properly used against Arsenal.