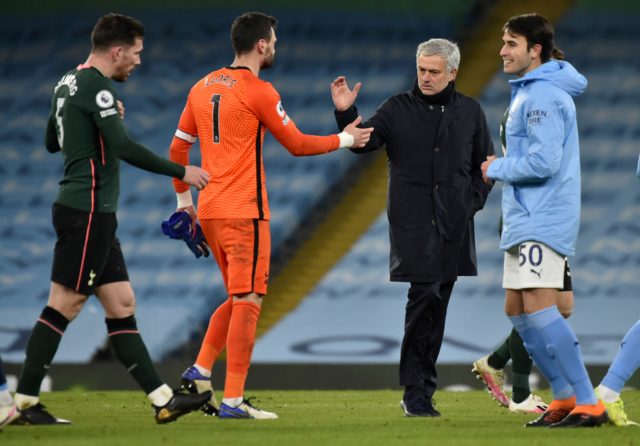 Spurs lost 3-0 against Manchester City on Saturday which was their fifth defeat in the last six games in all competitions.

Jose Mourinho’s side have now won just three of their last 12 league games, picking up 12 points from a possible 36, and the dreadful run of results has left them ninth in the table.

The popular pundit feels that Spurs have no chance of making it to the top four despite the fact they are only four points behind Liverpool.

“Top four has gone for Spurs, I think,” he said.

“As much as I’m living in dreamland and thinking if they win their game in hand they’re only one point behind Liverpool, I just don’t think Spurs have got enough about them to get in that top four.”

He feels some of the players have been “average” and “bad”, and that they need to shoulder some of the blame for their poor performances.

“When I look at Hugo Lloris, Davinson Sanchez, Erik Lamela and Lucas Moura, they just look so average and so bad, they’re making mistakes,” he added.

“In a way, there’s only so much a manager can do; when the players go on the pitch it’s up to them to produce, and they’re just not doing that at all.”

O’Hara suggests that Mourinho is struggling to get the best out of the players he has got.

He feels that the Portuguese boss has “sucked the life out of too many”, citing examples of Gareth Bale and Dele Alli – both the players have hardly featured this season.

Bale impressed in a cameo role against City, while Alli has also returned to full fitness.

“And I just feel like he’s sucked the life out of too many of them already.

“You look at Gareth Bale and Dele Alli, he’s cast them aside and hardly played them. Dele Alli wasn’t even getting on the squad, and now all of a sudden he’s putting him on and expecting him to make a difference.”

Spurs sit just two points above north London rivals Arsenal. Interestingly, at one point in time, it looked like the Gunners were fighting for survival, while Mourinho’s men were challenging for the title in December.

O’Hara feels that the players are lacking in confidence, and Mourinho’s tactics have gone out the window.

“They look like a team with a severe lack of confidence right now,” he said. “They look like they haven’t really got an identity of how they want to play.”