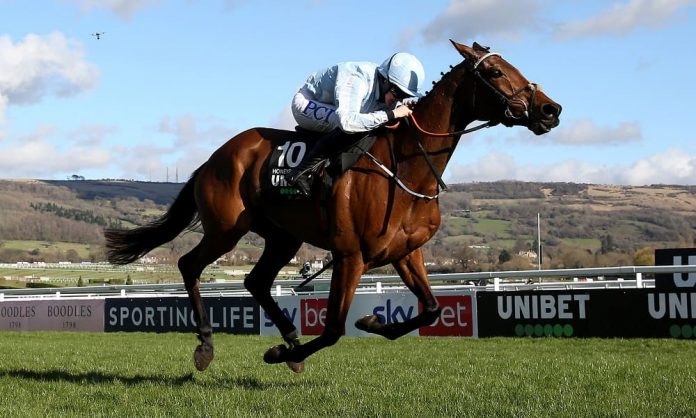 Opposition is running scared from Honeysuckle in the feature Irish Champion Hurdle at Leopardstown on Sunday, 6 February (3:00). Henry De Bromhead’s wonder-mare won this in the last two seasons and is a very strong favourite for her hat-trick. Is there any case against Honeysuckle? Let’s see what SportsLens experts say with their Irish Champion Hurdle tips.

Favourites have an excellent record in this race. In the past dozen renewals, 11 market leaders have won it, so horse racing betting sites pick the right horse. Most of those are previous course and distance winners too. Only two of the five runners in the Irish Champion Hurdle this year tick that box.

It’s fair to say that this year’s contest isn’t the strongest horse racing event ever put on at Leopardstown. Most of the main opposition to Honeysuckle in the 2m hurdling division choose to keep their powder dry for the spring. Their absence only shortens her odds. All recent Irish Champion Hurdle winners had an official rating of at least the high 150s.

Alas, three of the five entrants this year have marks of 155 or below. This isn’t a vintage renewal, then. At least a month off the track before coming to Leopardstown is a common trend of recent winners too. As the best betting sites show, all of the runners here had 39 days or more off the track. Stats only tell us so much, so what do Irish Champion Hurdle tips say this time?

Why Honeysuckle’s Irish Champion Hurdle odds are so short

Aforementioned dual race winner Honeysuckle tops official ratings on a mark of 165. She is the class act in this and receives a 7lb sex allowance from those closest to her with the handicapper. Adjusting figures to reflect the weight carried, she has 13lb and upwards in hand on the field. De Bromhead has won three of the last five renewals, and past Cheltenham results show she Honeysuckle is one of the best horses in training.

Against a disappointing turnout of four rivals, there is no real chink in her armour. Now aged eight, the daughter of Sulamani has an unbeaten career record of 14 starts including an Irish Point. Honeysuckle has won three of her last four starts by 6 1/2 lengths or more. Nothing less than a wide-margin success again here would be below par.

On these terms, there is simply no logic in opposing Honeysuckle. There are oppressive odds of 1/3 with Betfred as a result but she has to underperform by a whole stone to get beaten. On all known form, this looks like a penalty kick for a magnificent mare who should warm up for Cheltenham with an easy success.

Back Honeysuckle for the Irish Champion Hurdle with Betfred

Heading the hopeful rather than expectant challengers is Zanahiyr. Yet to win at the highest level for owners Bective Stud and trainer Gordon Elliott, this five-year-old Nathaniel gelding has progressed this season. Zanahiyr’s last two wins came in Grade 2 company, over course and distance in December 2020 and the WKD Hurdle at Down Royal on reappearance.

The fact that he is zero from four in elite company is the problem. Against a proven Grade 1 performer in Honeysuckle, Zanahiyr will have to improve again. He didn’t justify favouritism and Cheltenham odds of 11/8 when finishing out of the frame in the Triumph Hurdle last spring. After perhaps finishing an unlucky second in the Champion Four-Year-Old contest at the Punchestown Festival, Zanahiyr has twice bumped into Sharjah this season.

On a form line through the Morgiana Hurdle and Matheson Hurdle winner, however, there is no obvious reason why Zanahiyr should beat Honeysuckle. He does remain open to further progress, however, so the 11/2 with Bet365 is a solid each way alternative even though just five run. As all good Irish Champion Hurdle tips should point out, it is double figure prices bar Honeysuckle and Zanahiyr.

Back Zanahiyr for the Irish Champion Hurdle with Bet365

Others have monumental task on their hands

There’s no real case for any of the other three runners. Saint Roi has some 20 lengths to find on Honeysuckle from last year’s race. He could strip fitter for his return to action over Christmas when almost five lengths down on Zanahiyr but has had chances at this level before. Saint Roi is a 12/1 shot here.

Fellow Willie Mullins runner Echoes In Rain has twice finished behind that one too. He tries a first-time tongue tie on the Authorized mare but the fierce keenness she showed when progressing in novice company last term hasn’t helped her cause. Echoes In Rain is as big as 25/1, reflecting that she is 22lb behind Honeysuckle with the assessor.

Last season’s Coral Cup heroine Heaven Help Us completes the Irish Champion Hurdle line-up. On an official rating of 140, Paul Hennessy’s mare has an even bigger gap to the favourite. However, this may be a shrewd bit of placing by her trainer with €4,000 the prize for finishing fifth. The Champion Hurdle odds shouldn’t be changing much as this is a penalty kick for Honeysuckle.