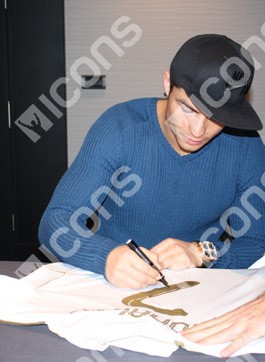 To celebrate Cristiano Ronaldo’s 100th La Liga goal for Real Madrid at the weekend, a once in a lifetime opportunity is being run by leading football memorabilia provider ICONS.com. In exclusive collaboration with the Portuguese superstar, ICONS.com are giving away a free CR7 Real Madrid or Manchester United jersey for one lucky winner! With Ronaldo setting club and Primera Division records at the Santiago Bernabeu, this is your chance to win a piece of leading merchandise from a player that will surely go down in football history – all you have to do is sign up for the site.

The 27-year-old superstar is one of the most recognisable and talented players to play the game in the current generation, and is spearheading Los Blancos’ silverware charge this term with his incredible goalscoring form. With 50 goals in all competitions already, it is set to be an unbelievable campaign for Ronaldo.

When Manchester United signed a then 20-year-old Ronaldo from Sporting Lisbon back in 2005, ICONS.com saw the attacking midfielder’s quality and potential, and signed the prestigious talent to an exclusive official merchandise deal. To this day, seven years later, the Portuguese marksman only signs official products for ICONS.com exclusively, so the leading memorabilia site is the only place to get autographed CR7 gear. This on-going relationship is built on trust and reputation, as two market leaders work together to make a fantastic and exciting partnership.

The CR7 range is sure to entice any football fan, with signed jerseys, boots and photos available for purchase.

How about a signed CR7 official Real Madrid jersey, with the superstar’s autograph either across the number on the back or on the front of the legendary Los Blancos white home shirt? Ronaldo is smashing records for the Santiago Bernabeu club; get your piece of history for just $599.99.

The skilful attacker swears by his Nike boots, which help him bury opponents and set scoring records; get a signed pair of Mercurial Miracle or Mercurial Vapor IV for $599.99, but don’t wear them!

A signed photo of one of his passionate goal celebrations for Jose Mourinho’s side would make a fantastic present this Easter, or would be a great addition to your sporting collection – get an autographed image of his celebration after scoring against arch-enemies Barcelona for only $299.99.

For all you Manchester United fans, relive the three Premier League titles and Champions League glory that CR7 helped the English club to during his stay at Old Trafford. An authentic signed Champions League jersey is yours for $599.99, or an autographed photo of the superstar heading his goal in the 2007-08 final against Chelsea is a fantastically priced $299.99.

Finally, with Euro 2012 on the horizon, get a photo of CR7 playing for Portugal in the lead-up to the tournament for only $149.99; the superstar is sure to be one of the leading lights in Ukraine and Poland this summer.

Take a bow Cristiano Ronaldo; a player of a footballing generation. For a once in a lifetime opportunity to win a signed Real Madrid or Manchester United jersey from CR7 visit ICONS.com today. You will regret it if you don’t!