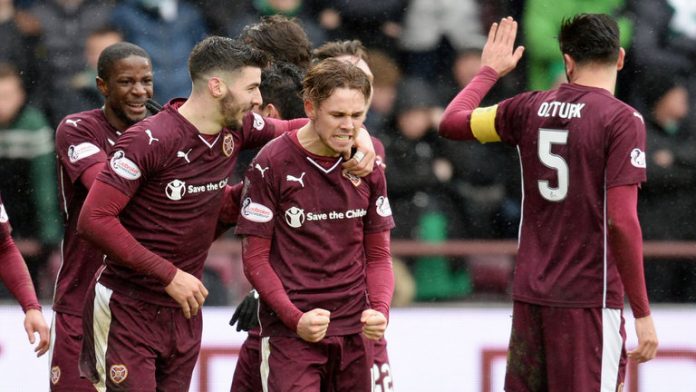 Hearts’ 2-0 victory over Inverness on Tuesday moved the Tynecastle side to within six points of Aberdeen, before the Dons’ win at Tannadice on Wednesday evening restored the nine-point gap. With the Jambos sitting pretty in 3rd place, chasing Aberdeen in 2nd, it can be easy to forget that they spent last season in the Championship. With a tally of 91 points and only 3 league defeats in the whole campaign, Heart secured an immediate return to the top flight in a fashion few would’ve have expected prior to the beginning of last season.

So, why has Hearts’ boomerang between divisions been so seamless? There can any one of a number of reasons to explain it but the most overarching explanation is that the margins between the bottom 8 teams in the Scottish Premiership and, at least, the top two in the Championship is minute. League tables don’t lie. The gap between Hearts in 3rd in the Scottish Premiership table and Ross County in 4th is a massive 11 points – and Hearts have played two less games than the Highland side. Another area which accentuates the gulf between the top three and the rest is goal difference. Hearts are on +23, and no one but no one below them can boast a positive goal difference – the next best is County and St. Johnstone (-2). It almost defies belief that a newly promoted team has overtaken the rest of the division to this extent. In no other league in Europe are the gaps in points and goal difference between 3rd and the rest worse than they are in the Scottish Premiership.

Of course, Hearts didn’t come from obscurity. They are used to being a top flight club and one of the biggest clubs in the country. This in itself didn’t guarantee an immediate comeback but it did have a hand in attracting the standard of player good enough to return them to this level. Their recruitment since relegation in 2014 has been more than decent. The additions of Osman Sow (now sold on to China), Miguel Pallardo and Alim Ozturk, among other others, formed the spine of the team which swept everyone else aside to win the Championship title last season. Those additons have been built on this season by the acquisitions Gavin Reilly from Oueen of the South, Arnaud Djoum on a free transfer from Lech Poznan and Spanish forward Juanma to bolster attacking options.

Another huge factor in Hearts’ ascendance is Robbie Neilson. His appointment as Head Coach, with Craig Levein returning to the club as the Director of Football, may have seemed risky in the summer of 2014 but it has paid off for the Tynecastle club. Neilson, who spent a decade at the club as player, has proven to be more than capable in the dugout, and at just 35, he is now one of Scottish football’s most promising ‘young’ managers. A win percentage a smidgen underneath 65% proves this.

It is the margins between those small-to-medium size clubs in Scotland though, which has allowed Hearts to return to a healthy position so swiftly. The majority of these clubs operate on a shoestring budget and don’t have the fan base, nor breadth of appeal, that Hearts do. As a direct consequence the quality of most Scottish Premiership squads is not sufficient enough for clubs to consistently secure steady league positions. This means that the impending return of Rangers to the top flight will have a similar impact to that of Hearts. There may well be a section of Rangers supporters who feel a sense of trepidation about next season given their League Cup defeat to St. Johnstone, and their struggle to get past relegation-threatened Kilmarnock in the Scottish cup, but the reality is that over the course of a league season a club that size will not have any real trouble breaking into the little cluster of three or four teams at the top of the Scottish Premiership.

An interesting caveat to all of that, is that Celtic – who should be a discernible distance better than everyone else in Scotland, given the four seasons of free reign they’ve been given – are at their lowest ebb in six years. Celtic’s regression means that those margins might well be getting smaller.