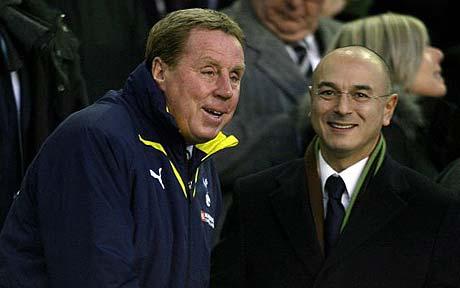 Tottenham Hotspur parted ways with head coach Jose Mourinho a week ago and have put under-23s boss Ryan Mason in charge until the end of the campaign.

The 29-year-old led Spurs to a 2-1 win over Southampton in midweek but could not inspire them as they suffered a 1-0 defeat against Manchester City in the Carabao Cup final on Sunday.

Tottenham chairman Daniel Levy will undoubtedly be keen to land a manager capable of turning his side into trophy winners and title challengers this summer.

Former manager Harry Redknapp is convinced that a decision has been made and that the north London outfit have already done a deal for their next boss.

When Mourinho was appointed, he was announced as Spurs boss within 12 hours of Mauricio Pochettino’s sacking.

Redknapp thinks the only reason the club cannot make a similar move is because their next manager is currently in a job at either club or international level.

“I’d say the man they have lined up is in work at the moment and can’t leave until the season is done – or if it’s an international manager, until after the Euros,” Redknapp told The Sun.

“That’s why Ryan Mason is in charge for now – but I guarantee they will have something sorted already. It may be a German, an Italian, a national team manager like Belgium’s Roberto Martinez, or someone in the Midlands.

“But they’ve definitely got someone lined up – and if you asked me who I’d put in, it would be Brendan Rodgers ahead of Martinez and RB Leipzig’s Julian Nagelsmann.”

Levy is a long-time admirer of Rodgers, and he looked to bring him to Spurs as Redknapp’s replacement when he was Swansea City manager in 2012.

However, the Foxes boss joined Liverpool instead before moving to Celtic afterwards.

Rodgers, 48, has made Leicester regular top-four challengers, and Tottenham have reportedly made him their top target.

They have been dealt a blow in their pursuit of Nagelsmann, with Bayern Munich now in talks with the 33-year-old, and it will be interesting to see whether they can lure Rodgers away from the King Power Stadium.

In other news, Spurs managerial target has told his club he wants out.