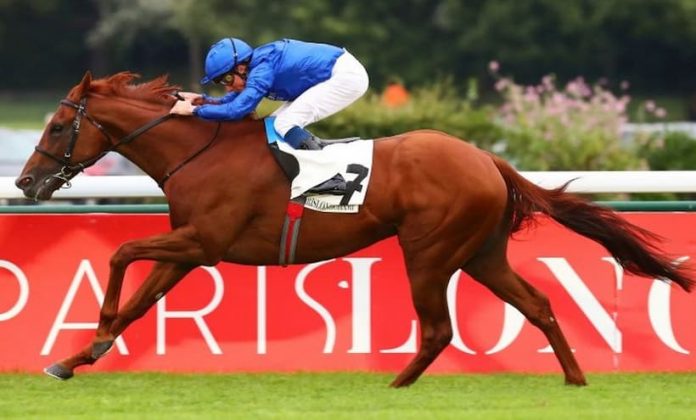 The Charlie Appleby-trained Hurricane Lane @ 5/4 with 888Sport has been put in as the favourite for this Sunday’s Group One Grand Prix de Saint-Cloud and Godolphin’s main man in the saddle – William Buick – is making the trip over to France to ride too.

We last saw Hurricane Lane running third in the Group Three Hardwicke at Royal Ascot in June, but that was his first run for 258-days and should strip a lot fitter this time.

With an official rating of 123 this 4 year-old is the top-rated in the race too and if successful will the first winner in the race for Godolphin, Wiliam Buick and Charlie Appleby.

A Strong UK and Irish Presence For Group One Prize

Away from Hurricane Lane, the nine runners for Sunday’s Grand Prix de Saint-Cloud see another four UK/Irish-based entries too – meaning less than half of the field are French-trained.

Roger Varian sends over his Third Realm, who comes here full of confidence after an easy 6 length Listed race win at Goodwood. While Lone Eagle (Martyn & Freddie Meade), plus the useful filly – Alpinista, who bypassed Saturday’s Lancashire Oaks to head here and is a three-time Group One winner in Germany, has a live chance too for the Sir Mark Prescott team.

The Aidan O’Brien runner – High Definition – will also be flying the flag for the overseas yards – O’Brien also won this race 12 months ago with his recent Royal Ascot scorer – Broome, which is his sole success in the contest to date.

See the full runners and betting below.

The Grand Prix de Saint-Cloud has been a decent race for the UK and Irish-trained runners in recent years. Since 2004, they’ve mopped up 8 wins between them with the likes of Sir Michael Stoute (3 wins), Luca Cumani, Mick Channon, Lady Cecil, John Gosden and Aidan O’Brien the winning stables.

Looking at the French-based runners, then it’s hard to ignore the record in the race of trainer Andre Fabre – with eight Grand Prix de Saint-Cloud wins to his name.

He runs two. Baratti – who heads here on a three timer after wins at Chantilly and Longchamp, but his slightly better chance could be Mare Australis. This 5 year-old saw off another of the runners heading to post on Sunday – Bubble Gift – by an easy 2 lengths at Chantilly last time and has now won 4 of his 9 starts.

He’ll love the expected soft ground and will have plenty of experience in the saddle with Olivier Peslier riding, who will be looking for his fourth win in the race.

This Sunday’s Grand Prix de Saint-Cloud is also billed as a decent prep and trial race for the older horses that might have the Prix de l’Arc de Triomphe on their radars later in the season.

12 months ago the winner of the Grand Prix de Saint-Cloud – Broome – went onto run 11th in the Longchamp race in October, while Treve in 2015 landed both this Sunday’s Chantilly race and the Prix de l’Arc de Triomphe in the same season.

With that in mind, the winner of this Sunday’s Grand Prix de Saint-Cloud is always worth having a look for in the ante-post Prix de l’Arc de Triomphe, which is set to be run on Sunday 2nd October.

What Time Is The 2022 Grand Prix de Saint-Cloud?