1. Myles Palmer tells us more about Arsenal shares and potential takeover talk. He also gives us some stats which provide for interesting reading, so do go have a look.

3. Juan, Bayer Leverkusen’s Brazilian defender (signed till 2009), is set to move to Italy (either Milan or Roma) after an interview in which he said:

“My dream would be to join Milan. They are a great club – the best, in fact.

It is a side packed with Brazilians and you can see their desire to get back to winning ways, much like Real Madrid.”

4. Xabi Alonso (Liverpool) talks about PSV and how they have already played them and know them well. In my view, Liverpool will PSV Eindhoven because a) Liverpool are defensively smarter than Arsenal and b) Liverpool need a single goal to win, which PSV will invariably concede.

Let Keano come with Sunderland to the Emirates and play defensively, that’ll shut you up 🙂

6. Sky Sports are carrying a report from the Holland press saying that Chelsea have signed Feyenoord’s 15-year old Jeffrey Bruma. Frank Arnesen at work, no doubt.

7. David Navarro thinks his 7-month ban (from all forms of football) is excessive because he’s already said sorry.

Are you talking about this, David? 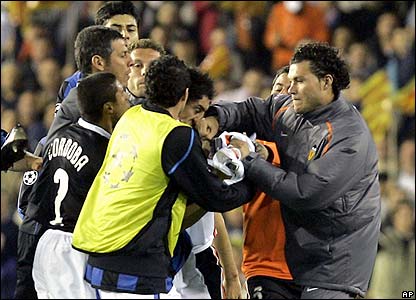