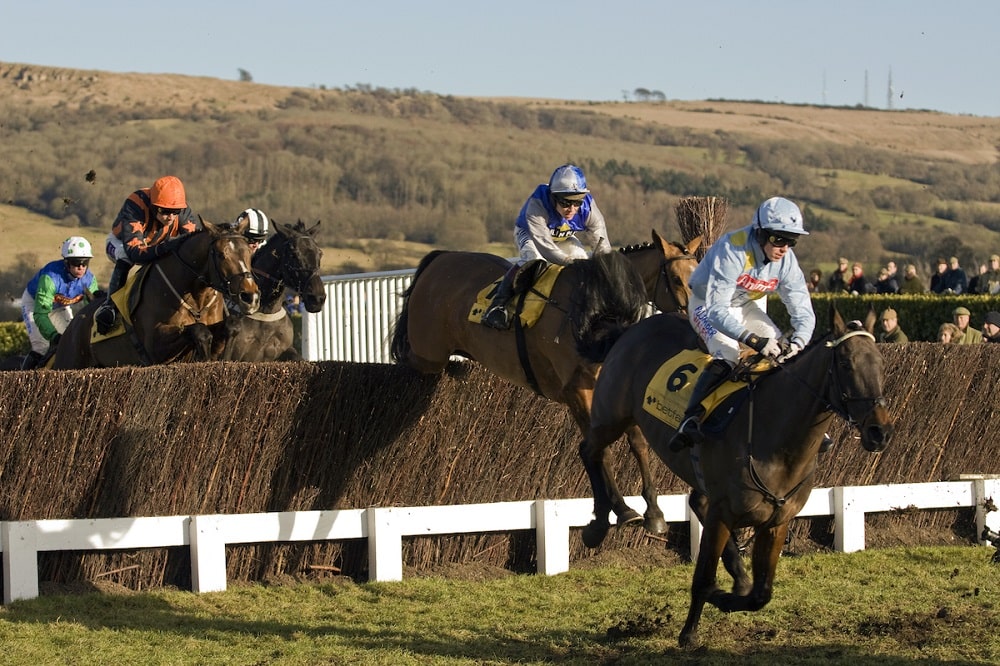 The International Meeting kicks off on Friday, 10 December, so SportsLens experts have their Cheltenham Friday tips for all the action at Prestbury Park. It’s the New Course in use for these contents, so it’s a stiffer test that suits galloping types. See who our tipsters fancy across the card below:

Four previous winners over the obstacles are among six declarations here. All have claims. Hartur D’Oudairies represents JP McManus and the Skelton team after winning at Warwick, while Olly Murphy’s Washington drops in grade after chasing home I Like To Move it in the Sharp Novices’ Hurdle. That Supreme trial was on the Old Course, however.

Fontwell scorer Datsalrightgino needs to step up on that effort here, so the most interesting one is Jpr One. Trained by Colin Tizzard, this four-year-old Court Cave gelding runs in the colours of JP Romans of Elegant Escape fame. Jpr One defeated Persian War second Luttrell Lad in really gutsy style on racecourse debut at Exeter.

He prevailed by half-a-length and had the highly-regarded I Am Maximus, a smart recruit from bumpers, the same distance further back in third. Jpr One can only improve for his taking bow, so looks a value bet on horse racing betting sites at 9/2 with William Hill for the spoils here with Brendan Powell Jr again in the plate.

Bet on Jpr One with William Hill

Next up in our Cheltenham Friday tips for 10 December is a trappy staying novices’ limited handicap chase where many have claims. Coeur Serein was going well when falling at the final fence on his debut in this sphere last time out. However, there is a 7lb hike the weights for that Jonjo O’Neill trained gelding to overcome as well as the tumble.

Paul Nicholls reaches for blinkers on Barbados Buck’s but he jumped poorly at Wetherby and failed to match market expectations in the Albert Bartlett on this course in the spring. Undersupervision has been unlucky in two chase starts on the Old Course, almost running out at the last when second in October before an early fall at the November Meeting last month.

Scottish trainer Lucinda Russell has her yard in fine form, so it looks significant that Corach Rambler has been declared here. This seven-year-old son of Jeremy has hurdles wins on soft and heavy ground, so he should handle any further rain courtesy of Storm Barra. Corach Rambler holds an entry in the Grade 2 December Novices’ Chase at Doncaster yet could contest this.

If turning up on the back of his Aintree win, odds of 9/2 with William Hill look a bit of value. A 7lb rise for a six-length success there looks fair, and his revised mark of 134 still gives him a nice racing weight of 10st 13lb. Corach Rambler also receives some from his main market rivals, which helps too.

Back Corach Rambler with William Hill

A competitive handicap hurdle over an extended 2m that it’s hard to have a strong view on. Broomfield Burg is an obvious one for the shortlist representing McManus and trainer Nicky Henderson. This five-year-old son of Sageburg may have needed his first run for 162 days when chasing home Silent Revolution at Chepstow.

The third, Boombawn, filled the same spot behind owner-stable companion Jonbon, so connections should have a handle on the form. That’s why Broomfield Burg is the 7/2 favourite off an opening mark of 130 here. At the foot of the weights, Lively Citizen was runner-up in this 12 months ago and tries to go one better.

Trained by Jim Jeffreys, this six-year-old gelding is officially 2lb out of the handicap but his wily handler books 7lb claimer Archie Bellamy in the saddle. That offsets being out of the weights. Also taking that claim into account, Lively Citizen is 6lb below his mark from last season. Another good show off a featherweight can be expected at 11/2.

Another of interest here is Fergal O’Brien runner Castel Gandolfo. He ran a blinder at odds of 50/1 in a November Meeting handicap off 2lb lower here, taking second close home. Now switched to the New Course, the four-year-old son of Dark Angel just has the question mark of a softer surface to handle. However, Castel Gandolfo is another worth considering each way at 17/2.

This contest seems to surround Venetia Williams’ Fontaine Collonges. A six-year-old daughter of Saddler Maker, this French import likes soft ground and has been progressive in two starts over fences this autumn. Fontaine Collonges went straight into Grade 2 novice company over hurdles following a bumper win at Ludlow, so that shows the regard in which this mare is held by connections.

After landing her final start of last term at Leicester, she shaped as if needing the run when fourth at Wetherby. Fontaine Collonges then battled back superbly to win at Warwick, defeating re-opposing rival Precious Eleanor. There is a swing in the weights, but further ran helps the cause. Fontaine Collonges is the 5/2 favourite with William Hill, while Betfred go 11/2 about Precious Eleanor.

Cheveley Park Stud’s Rose Of Arcadia may have been bought for chasing, meanwhile, and makes her debut in this sphere for Tizzard. He puts a tongue tie on this daughter of Arcadio for the first time here, so that should help with her breathing. An Irish Point winner, Rose Of Arcadia is another to consider with Bet365 going 11/2.

In the 3m 2f Grade 3 Betfair Handicap Chase, Santini frames the weights on his return to action and Enrilo receives 12lb. Trainer Paul Nicholls and owner Martin Broughton are still out for some compensation after losing the Bet365 Gold Cup in the stewards’ room. Enrilo fell in the back straight during the Ladbrokes Trophy, but turns out quickly so can’t be worse for the tumble. It could pay to look beyond BoyleSports‘ 5/2 favourite here.

Hurricane Harvey has a 9lb pull in the weights with Wincanton conqueror Rocco from their Listed meeting last month. The former is trained locally to Cheltenham by Fergal O’Brien and the swing in the handicap brings his charge into calculations. Hurricane Harvey is 6/1 with the same firm.

Rocco represents another local yard in the Nigel Twiston-Davies stable. His defeat of Potterman and Hurricane Harvey was a career best off 134, yet he must now contend with a 5lb higher rating and doesn’t have a claimer on board this time either. Leading bookies Betfred go 8/1 about Rocco’s hopes of following-up.

Over from Ireland, meanwhile, is Mister Fogpatches. Pat Fahy’s charge loves extreme tests of stamina, so should be staying on here when others crack. Whether the trip is far enough for him is the only question. Mister Fogpatches was third in the Scottish Grand National before landing a long-distance Punchestown Festival handicap.

He has also finished a fine third in both the Cork Grand National and Troytown Handicap Chase this season. William Hill go 13/2 about Mister Fogpatches, and he’s another to consider each way in our Cheltenham Friday tips for the International Meeting.

Back Mister Fogpatches each way with William Hill

The key form to this Cross Country contest could be last month’s course and distance event won by Back On The Lash. Another locally trained horse hailing from the Martin Keighley stable, he took to this unique discipline well. However, the going could be much softer and Back On The Last only won by a neck.

That brings the runner-up, Singing Banjo, into things off 1lb better terms. Philip Rothwell’s veteran has plenty of experience in this discipline, and could strip fitter for the run after 163 days off over the summer. He looks great each way value at 17/2 with QuinnBet, who pay five places.

Another eye-catcher in that run was Plan Of Attack. One of two declared by Henry De Bromhead, he was beaten just two lengths in fourth on his first Cross Country outing. Plan Of Attack now meets the winner off 3lb better terms and was staying on all the time. He was also a fine fourth in the 2020 Kim Muir on soft ground, so handles the surface. It is 6/1 with Bet365 about Plan Of Attack building on that effort.

Diesel D’Allier is some 12lb higher in the weights than when he won this race two years ago. Banks specialist trainer Enda Bolger also sends over Midnight Maestro, but he didn’t see out 3m on the Punchestown Cross Country course last time out. The each way bets in our Cheltenham Friday tips here are Singing Banjo and Plan Of Attack.

Back Plan Of Attack each way with Bet365

And finally, the closing 3m handicap hurdle is another chance for Sporting John to advertise his Stayers’ Hurdle claims. Owned by McManus, this Philip Hobbs trained six-year-old won a Grade 1 novice chase when landing the Scilly Isles at Sandown on heavy ground in February. The Getaway gelding is clearly a classy sort.

Sporting John returned over hurdles landing a Listed handicap on the Old Course here in October. He kept on really well towards the finish, so a 5lb rise in the weights may not stop him from going in again. As his main market rival, which according to the early market on betting sites is Onagatheringstorm, hasn’t got home up the famous hill twice now, it is hard to see past Sporting John. He is a strong fancy at 15/8 with QuinnBet to follow-up.

Bet on Sporting John at Quinnbet