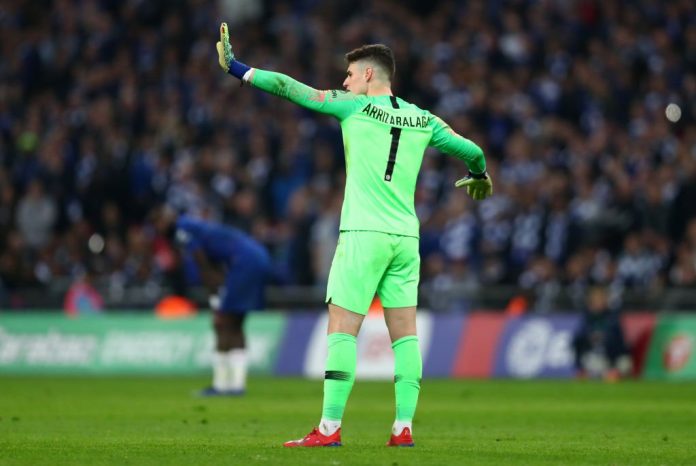 Raheem Sterling scored the winning goal for his side in a fiercely contested game at the Wembley stadium.

However, the result or the performance did not steal the headlines in the end.

Chelsea keeper Kepa Arrizabalaga’s refusal to come off in the dying minutes of extra time will take all the attention.

Maurizio Sarri tries to substitute Kepa Arrizabalaga for Willy Caballero, but Kepa refuses to come off and Sarri is absolutely FURIOUS! ? pic.twitter.com/Q81v6ry3Kk

Maurizio Sarri wanted Willy Caballero in goal for the penalty shootout but the Spaniard refused the substitution.

The Chelsea boss’ furious reaction to the situation added to the chaos on the touchline.

At the end of extra time, Sarri had to be restrained by Antonio Rudiger as the Italian tried to confront the Chelsea keeper.

Kepa’s show of disrespect towards the Chelsea manager has attracted a lot of criticism from the Chelsea fans as well as the fans of other clubs.

Chelsea fans have taken to Twitter to share their thoughts on the incident and here are some of the reactions.

Kepa should be fined for his insubordination.He just disobeyed the manager. Doesn’t matter if he is injured or not…..he should have just left the field.Just leave you clown.Monkey ass Kepa.i hate it when players take authority….this is stupid.This was a lack of communication

If we lose on penalties, Kepa’s getting sold in the morning.

What a disrespect from Arrizabalaga

Disgraceful from Kepa, who does he think he is. Get rid of him now.