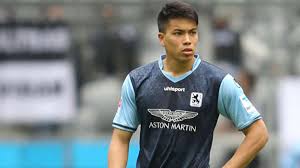 The 21-year-old forward could be making his second cap for the Yanks this September.

TSV 1860 Munich forward Bobby Wood was announced by his club on Tuesday, that he was on the final roster for the USMNT friendly against the Czech Republic on Sept. 3, but US Soccer stated that the announcement was premature.

The United States Soccer Federation said that the Hawaiian native was on the preliminary roster for the  friendly, but at the moment no decision has been made on who will be representing the Stars and Stripes in their first match since the 2014 World Cup.

However, if the former youth international does get selected to the U.S. roster, he could possibly be getting his second cap for the Red White and Blue.

The Hawaiian native has been apart of the TSV 1860 Munich program since 2007, however, he did not start playing for the side till 2010 when he broke into the reserve team. In 2011 Wood broke into the first team, and has been playing in the 2.Bundesliga for the Lions ever since.

As for his youth international career, he played for the under-20 U.S. national in 2010, and then progressed  to the Under-23 national team in 2011. However, he reached the senior team of the Yanks in 2013 where he played against Bosnia and Herzegovina in friendly last August for his first cap.

Wood along with all the other American players will be waiting until the end of the week to see the roster U.S. Head Coach Jürgen Klinsmann announces for the upcoming friendly on Sept. 3 against the Czech Republic in Prague.