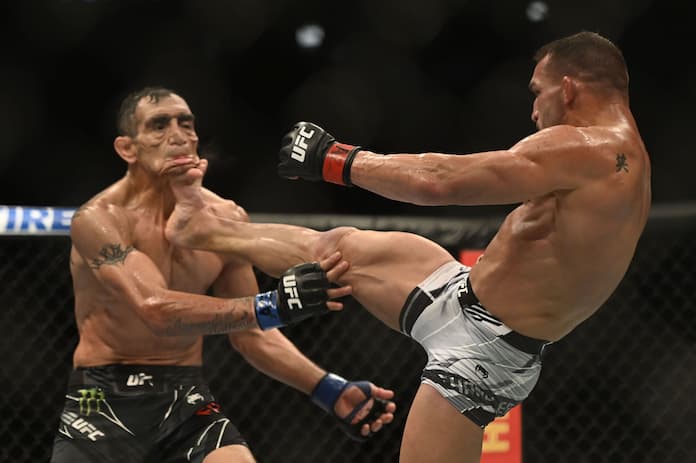 With just a few months left of the year, we though it would be a good time to outline the five best UFC knockouts of the year so far. These five knockouts were some of the most mouth-watering, heart-stopping, sensational knockouts you are ever likely to see in the sport of mixed martial arts.

The list includes the likes of Michael Chandler, Molly McCann and of course Leon Edwards. So without further ado, here are the five best UFC knockouts of 2022 so far.

5 Best UFC Knockouts Of The Year So Far

Counting down from 5 to 1, here are the the five best knockouts of 2022 so far in the UFC…

In at number five on our list of the best KO’s of 2022 is Tai Tuivasa’s stunning elbow knockout of Derrick Lewis at UFC 271 at the Toyota Center, Houston, Texas.

This stunning knockout certainly deserves to be in the top 5, as it also had huge implications on who could potentially fight for UFC gold in the heavyweight division next. The Australian power puncher landed a peach of an elbow with less than two minutes remaining in the second round, sending Lewis tumbling to the deck.

The knockout also earnt ‘Bam Bam’ a ‘Performance of the Night’ bonus, paving the way for him to face Cyril Gane to see who could challenge Francis Ngannou next for the UFC Heavyweight Championship. A stunning knockout for sure and there is just something about big KO’s in the heavyweight division, isn’t there?

The fourth best knockout in the UFC this year for us here at SportsLens comes from Jamahal Hill in his light-heavyweight bout with Johnny Walker.

This was the main event at UFC Fight Night: Walker vs Hill, and ‘Sweet Dreams’ was deemed the betting underdog going into the fight. That was until he landed a beautifully timed right hook/cross right on the temple of the Brazilian, who was knocked unconscious before he even fell to the mat.

Walker did a funny dance once the shot landed, before falling flat on his back with Hill jumping on top of him to ensure he was knocked out and to secure the victory. A scary knockout by one of the biggest punchers in the 205-pound UFC division.

Embarking on the top three knockouts of the year so far, and this one most certainly deserves to be right up near the very top. We are of course talking about Molly McCann’s demolition job and outstanding KO of Luana Carolina at UFC London Fight Night: Volkov vs Aspinall.

The crowd went absolutely crazy as ‘Meatball’ landed the sweetest spinning elbow you are ever likely to see, right on the chin of Carolina. The O2 Arena erupted as the Brazilian flyweight wilted to the mat straight away, sprawling across the octagon canvas completely unconscious.

Not only does this deserve to be in the top three on it’s own merit, but the fact it was in front of a hometown crowd on such a monumental night for British MMA certainly cements it’s place right up near the top and on the podium here.

In at number two and extremely unlucky not to claim top spot is Michael Chandler’s sensational front kick knockout of Tony Ferguson at UFC 274. What make’s this knockout even more special is that Ferguson is one of the most durable mixed martial artists on the UFC roster, but Chandler’s precise right front-kick to the jaw of ‘El Cucuy’ was all she wrote.

Chandler was coming in to this fight off the back of two losses on the spin to the UFC Lightweight Champion, Charles Oliveira, and a close decision loss to Justin Gaethje. The fight was right in the middle of the main card, and brought the Footprint Center in Phoenix, Arizona to a standstill.

To add to the frenzy of the knockout, ‘Iron’ Michael Chandler completed three backflips in the octagon afterwards before climbing the octagon fence to soak in the applause of the crowd.

Usually a knockout like this would be in first place without any shadow of a doubt, but that cannot be the case due to the sheer magnitude and circumstances of our number one pick. So without further ado, here is the best knockout of 2022 so far…

Coming in at top spot and lifting the SportsLens title for the best knockout of 2022 in the UFC is Leon Edwards’ stunning last gasp fifth round head-kick knockout of UFC Welterweight Champion and pound-for-pound king, Kamaru Usman.

This finish was always going to claim top spot, given the circumstances of the fight, how the first four rounds had gone and who Edwards was up against. All of this added to the fact that it was a highly anticipated rematch and that the Englishman was a huge underdog going into the fight.

The first four rounds had all gone the way of the champion, with Usman controlling each round at his leisure without really breaking a sweat. Into the fifth and final round and the ‘Nigerian Nightmare’ was still coasting, but with just less than one minute left on the clock, the unthinkable happened.

Usman was taking a step back with Edwards putting all of his energy into the remaining seconds of the fight, before landing the most perfectly timed and exquisitely executed head kick you are ever likely to see in an octagon.

Edwards, fighting from the southpaw stance, feinted the jab, which Usman fell for, before following up with a stunning left head kick around the side, landing perfectly on the temple of the long-reigning UFC Welterweight Champion.

The fact that Edwards evened the scores with Usman, continued his insane winning streak and became only the second ever UFC Champion from the UK, makes this the best knockout of the year so far.