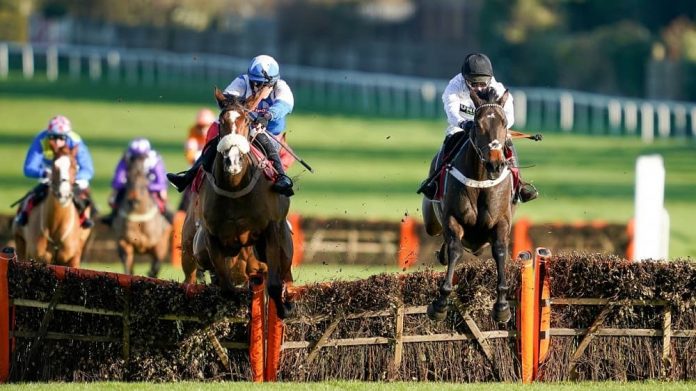 Sandown’s feature race on Saturday, 8 January and the first British Grade 1 of 2022 is the 2m Tolworth Hurdle for novices (2:25). Even the ante post betting on this year’s renewal is all about one horse. Constitution Hill created a big impression with his course and distance success last month, so is one of the hottest Tolworth Hurdle tips in town.

Stats and trends support horses like him coming to this test from an Irish Point-to-Point background. Three of the last six Tolworth Hurdle winners started their racing careers in that sphere. Usually run on soft or heavy ground, experience of Sandown isn’t essential for this but stamina is. Four of the last eight winners boasted previous victories over further than 2m 1f under Rules.

Ratings don’t tell us an awful lot but, in years when there were victors with a mark, it is 138 and upwards. Each of the last four Tolworth Hurdle winners came into the race with an official rating of 140-142. Many of the five-day entries in this renewal don’t look good enough on paper, then. Five of the seven most recent favourites have obliged, so horse racing betting sites usually get the one most likely to win right.

For a race so often taking place on testing ground, fitness is vital. It’s common for successful horses to have two or three previous runs under their belts before coming to Sandown but it can be won off just one outing. In terms of age, the profile is clearly five-year-olds and six-year-olds. Armed with that knowledge of Tolworth Hurdle trends, let’s take a look at the case for this short-priced favourite first.

Why Constitution Hill has such short Tolworth Hurdle odds

Nicky Henderson has trained four of the last 11 winners of this race, so Constitution Hill is clearly in the right hands. Owned by Michael Buckley, who has been a long-time supporter of both the sport and stable, this five-year-old Bleu Bresil gelding went down fighting by a head in an Irish Point at Tipperary.

The attitude that Constitution Hill showed that day impressed his new connections, so he was purchased from the Emerald Isle and moved to Henderson’s Seven Barrows stable. He duly bolted up on British, Rules and hurdles debut over course and distance in December with a 14-length romp leaving potentially re-opposing rival Might I for dead. Although he could meet the runner-up off 3lb worse terms, it’s nothing like enough to land a blow on its own.

Constitution Hill shares a sire with Royale Pagaille, who sluiced through the mud to land the Grade 2 Peter Marsh Chase just a little under a year ago. Soft ground is no problem, according to his pedigree. If coming on for his first start outing over the smaller obstacles, then it is impossible on all known form to see past this exciting horse.

As Constitution Hill has 10lb and upwards in hand against the field of potential runners on Racing Post Ratings, opposition may end up running scared. All that will do is see his odds for Tolworth Hurdle glory contract further. He was as big as 1/2 when the ante post market opened, yet William Hill are now 2/5 about his chances. There isn’t any juice in those odds yet Constitution Hill must win to justify his 4/1 quote with the same firm for the Supreme at Cheltenham in March.

Back Constitution Hill with William Hill

Reigning British champion jumps trainer Paul Nicholls took four of six renewals of this race between 2003 and 2008. The sole entry from Ditcheat this year is Mr Glass, who could drop markedly in trip. Winning over further is no disadvantage as Tolworth Hurdle trends show and this six-year-old Sholokhov gelding scored at 2m 6f on Fighting Fifth day at Newcastle last time out.

Mr Glass defied a penalty there, following-up on a four-length victory on his hurdles bow at Chepstow. His back bumper form includes a decisive triumph on heavy going at Wetherby, so cut in the ground is not a problem. The way in which Mr Glass made all at Newcastle and kept on well doesn’t automatically mean going down in distance will suit. Nonetheless, William Hill are again the top price at 13/2 about his chances.

Another who won’t mind it soft or worse is the aforementioned Might I. Trainer Harry Fry saddled last season’s Tolworth Hurdle winner in Metier. Might I, who won a Warwick bumper before a fine fifth in a Listed event at Newbury, bolted up on hurdles debut at Newton Abbot. This six-year-old Fame And Glory gelding boasts a stamina laden pedigree too.

Might I was simply no match for Constitution Hill on ground described as good to soft. He may well get closer to the favourite on more testing ground, but there are an awful lot of lengths to make up. Another downside is regular jockey Lorcan Murtagh won’t be able to use his 3lb claim in this Grade 1. Despite best odds of 8/1 with Hills, Might I has it all to do to reverse course and distance form.

The only angle into the Tolworth Hurdle betting for those seeking value this year is waiting for a without the favourite market from online bookmakers, or backing something each way for second place. Datsalrightgino pulled off a surprise win at Cheltenham over some useful types when last in action, so may have been overlooked.

Trained by Jamie Snowden, this six-year-old It’s Gino gelding prevailed by a neck over JPR One. That one has previously bested I Am Maximus, who won his next start and then finished runner-up in a Listed 2m 4f Ballymore Trial at Cheltenham on New Year’s Day. He now has an official rating of 134. On a form line through JP One, however, a mark of 132 could well underestimate Datsalrightgino. Whether he will run on soft ground here remains to be seen, but there is some each way value in the 10/1 Betfred offer.

If substantial form appeals, then Shallwehaveonemore ticks plenty of boxes. Trained by Gary Moore, this five-year-old Authorized gelding has seen a couple of those in-behind him when runner-up at Ascot last time out win since. The third and sixth home both have hurdles victories to their names now. After just two career starts, Shallwehaveonemore remains open to further progress. He is also 10/1 with Hills here.

Jetoile has most to find on ratings yet Ryan Potter’s horse remains in the mix in the Tolworth Hurdle betting. The form of his Cheltenham third to Top Bandit from October has worked out very well. Each of the winner, runner-up Brorson and Jetoile himself have scored twice since. What that amounts to can be questioned, but this seven-year-old Jeremy gelding seeks his hat-trick. Jetoile is as short as 7/1 with BoyleSports here.

Back Datsalrightgino each way with Betfred