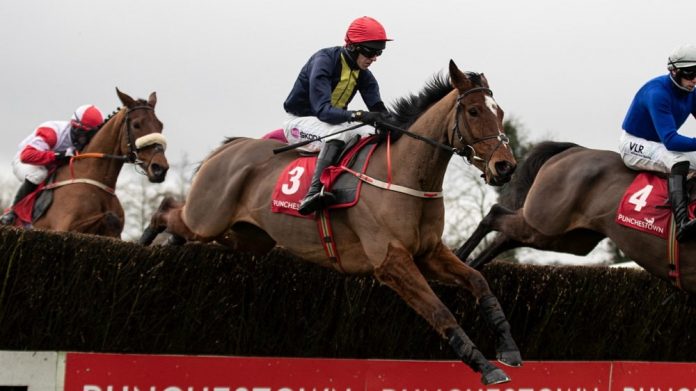 The big staying handicap at Gowran Park on Thursday, 27 January is the 3m 1f Grade A Thyestes Chase (3:05). This year’s renewal is a typically competitive event with many runners from top Irish stables. See the horses SportsLens experts like in their 2022 Thyestes Chase tips below.

As with any valuable prizes in the Emerald Isle, Willie Mullins and Gordon Elliott feature among trends. We’ll get to them. All recent winners came to Gowran Park race-fit off at least one run. Only two of the last eight favourites with horse racing betting sites delivered but both of those were in the three most recent renewals.

At the other end of the spectrum, horses with odds no bigger than 16/1 have been successful in the last eight years. That suggests outsiders can be discounted. The ground at Gowran is often very testing at this time of year, so that puts a premium on stamina but also handling soft and heavy going.

There isn’t an age profile as such. Recent Thyestes Chase scorers have ranged from six-year-olds up to more mature horses aged 10 and even 11. Official ratings aren’t much help either with winners in the last eight racing off marks as low as 137 but as high as 154. Five of the last six successful horses ran between three and four weeks beforehand, so that trend could be useful. Now let’s see who is among our Thyestes Chase tips this year.

Why Longhouse Poet is a Thyestes Chase betting fancy

Canny trainer Martin Brasill won this race back in 2005 with subsequent Irish Grand National and Aintree hero Numbersixvalverde. There has been an ante post gamble on Longhouse Poet from his Dunmurray stables. This eight-year-old son of Yeats landed his fourth attempt at a beginners chase on his final start of last season.

Longhouse Poet rallied superbly despite a mistake at the final fence, then got back up and denied Run Wild Fred over the 3m 1f trip of this around Punchestown. The runner-up went on to fill the same spot in last season’s Thyestes Chase and Irish Grand National. Run Wild Fred is also the ante post favourite on Cheltenham betting sites for the National Hunt Chase after landing the Troytown at Navan this autumn.

The Big Dog, home in third, went on to win the Irish Grand National Trial at Punchestown last February. That form reads very well in relation to this contest, another graded handicap. It’s not the only effort that augurs well for Longhouse Poet either. He chased home Janidil at Naas earlier in the campaign and that one went on to Grade 1 glory in the Fairyhouse Gold Cup.

Now stepping back up in distance after tackling too sharp a trip at Limerick over Christmas on reappearance, Longhouse Poet has more to offer. An official rating of 145 means a nice racing weight of 10st 9lb for him here. It isn’t difficult to see why there’s been a gamble on Longhouse Poet with William Hill going 6/1 about him and paying six places. This is a betting stable, so he just had to be among Thyestes Chase tips this year.

Back Longhouse Poet with William Hill

Not including one of the reserves, Gordon Elliott has five guaranteed runners. The market speaks in favour of Cork Grand National winner Braeside, although this race is 3f shorter. The eight-year-old Presenting gelding is also in his second season over fences and the choice of Jack Kennedy.

Braeside hit the frame in three of his first six outings in this sphere, making it a magnificent seventh successful attempt at Cork. Stepping up in trip for a real test of stamina on heavy going suited him. While Braeside does meet the re-opposing third Mister Fogpatches, a general 14/1 on betting sites to turn the tables, off 13lb worse terms here, the front two pulled well clear of him that day.

As Braeside then ran a staying on fourth in the Paddy Power Chase at Leopardstown over Christmas, the extra furlong of the Thyestes Chase and softer ground should be ideal. He is up a further 2lb, so now races off 12lb higher than his Cork victory. Braeside is another with obvious claims and Betfred, who also pay six places, go 13/2 that he wins this.

National Hunt Chase third Escaria Ten (9/1 with BoyleSports) may find a lack of race fitness telling, even if the owners’ retained jockey Adrian Heskin comes over for the ride. Elliott also has last year’s winner, Coko Beach (a top-price 14/1 with Hills), running off 9lb higher. Fellow Gigginstown House Stud runner Death Duty hasn’t won for over four years and Smoking Gun gets an 8lb hike for winning the Porterstown at Fairyhouse. Braeside is the clear pick of the Cullentra House quintet, then.

Bet on Braeside with Betfred

Noel Meade has never won this race before but did saddle the third in 2020. Diol Ker is one four representing owners Gigginstown House Stud in this renewal and lurking at the foot of the weights. He ran a huge race in defeat when an unlucky runner-up in the Galmoy Hurdle on this card 12 months ago.

Although a maiden over fences, this eight-year-old Martaline gelding shaped well when second at Fairyhouse last time out. Diol Ker has been running over the wrong trip, especially based on his gallant Gowran effort last year. He was short of room jumping the final hurdle, then rallied superbly forcing Sams Profile to pull out all the stops.

Diol Ker has been keeping on at the business end of his beginners chases over 2m 4f and 2m 5f. He hasn’t got the speed to be effective at that distance, so this longer trip may be better. Diol Ker clearly handles softer surfaces and could be potentially well-handicapped. That is why Bet365 make him a 7/1 shot to break his duck in this sphere. Diol Ker is one of our top Thyestes Chase tips under Sam Ewing and 9st 13lb.

Back Diol Ker with Bet365

Franco De Port the pick of Townend among Mullins mounts

Willie Mullins, who has five wins in the race over the last decade and eight overall, also has five guaranteed runners. Stable jockey Paul Townend chooses Franco De Port, who is unexposed at staying trips. He drops down in class after running the Savills Chase at Leopardstown over Christmas.

This seven-year-old son of Coastal Path won a Grade 1 as a novice after landing his chase debut at this venue. Franco De Port found things happening way too quickly for him as a hold-up horse over 2m, so shaped nicely when runner-up to the aforementioned Janidil in the Fairyhouse Gold Cup last Easter.

He has been disappointing since but there must be confidence in him on handicap chase debut in Closutton. Franco De Port is a 9/1 chance with 888Sport to bounce back. For some punters, that is plenty short enough but it’s still an ease into handicap company.

Other Mullins mounts in the Thyestes Chase include Munster National winner Ontheropes (11/1 with Hills) in first-time cheekpieces. Class Conti (22/1 with the same firm) placed in the last two runnings of this, meanwhile, and he’s 1lb lower than 12 months ago. Brahma Bull has a string of fine efforts in defeat this season and this is no easier, while Agusta Gold gets blinkers for the first time. Both are big outsiders.