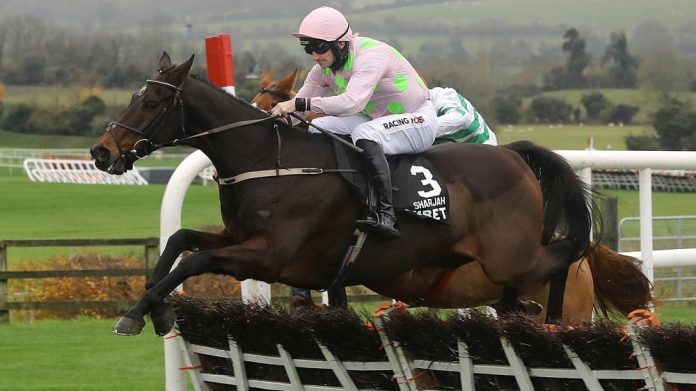 The feature race on the fourth and final day of the Christmas Festival at Leopardstown is the 2m Grade 1 Matheson Hurdle (2:20). Two exceptional horses, Istabraq and Hurricane Fly, have won this four times before. Sharjah is all the rage to add his name to that exclusive club after landing the spoils in each of the last three seasons. Is there any case against the favourite? Read 2021 Matheson Hurdle tips from SportsLens experts to find out.

Six of the last dozen favourites have won this race, although none have been successful since 2015. Nine of the 12 most recent winners had an official rating of 156 or higher, and only Sharjah ticks that box from this year’s field of six. The case already looks strong for that one. There is also a substantial history of multiple winners, starting with Grabel hitting a hat-trick in 1988, 1989 and 1990 when the race was known as the December Festival Hurdle. Brave Inca also won this twice in 2005 and 2006.

With the multiple victors age profiling isn’t as significant as in other events. Closutton master trainer Willie Mullins has saddled eight of the last 11 winners, meanwhile. Both he and long-time rival Gordon Elliott each have three runners in this year’s renewal. The latter’s Cullentra House stables produced a shock 14/1 winner of this back in 2017 with Mick Jazz. See full Matheson Hurdle tips and which horse racing betting sites to take a punt on from our experts below.

Why Sharjah is favourite in the Matheson Hurdle betting

The claims of three-time race winner Sharjah are crystal clear. Trained by Mullins for Rich and Susannah Ricci, this eight-year-old Doctor Dino gelding brings the best form into the contest. Runner-up in the Champion Hurdle in both of the last two seasons, Sharjah only found Honeysuckle too good both there at Cheltenham and in the Punchestown Festival equivalent on his final two starts of the 2020/21 campaign.

All of the winner, runner-up and third home, Epatante, have since landed Grade 1 contests. Honeysuckle retained her Hatton’s Grace crown at Fairyhouse on reappearance, while the latter regained the Christmas Hurdle at Kempton on Boxing Day after dead-heating in the Fighting Fifth at Newcastle. Sharjah won a second Morgiana Hurdle at Punchestown on his return to action in November.

He has also beaten each of his five rivals before, and there is no obvious reason why any should turn the tables. Sharjah has 9lb and upwards in hand on the field on official ratings, so it’s no wonder that Bet365 make him their 4/5 favourite for a fourth consecutive Matheson Hurdle win. Anything other than yet another victory will be a disappointment for connections despite rain hitting the track.

Bet on Sharjah with Bet365

Of the three Elliott runners, only Zanahiyr remains open to further progress. The youngest in the line-up as a four-year-old, this Noel and Valerie Moran owned son of Nathaniel won at the Christmas Festival as a juvenile 12 months ago. Zanahiyr is zero from three in Grade 1 company since but connections have been brave in campaigning him. It is often difficult for horses of this age stepping into open company but he has run well on both starts this season.

Zanahiyr built on finishing fourth at the Cheltenham Festival when chasing home Jeff Kidder in the Champion Four-Year-Old Hurdle at Punchestown. He then made a winning reappearance in the Grade 2 WKD Hurdle at Down Royal before chasing home Sharjah in the Morgiana. Again meeting the winner off the same terms, there is no obvious reason why Zanahiyr should reverse form, even though softer ground is better.

He has 9lb to find with Sharjah on ratings but just three lengths on Punchestown form. Zanahiyr has only had seven hurdles starts, though, so should have more improvement in him. That explains odds of 100/30 with Betfred here, yet he looks booked for second place again. The same connections also run veteran Petit Mouchoir, who won the Matheson Hurdle way back in 2016 for a different owner and trainer, and he makes no appeal rising 11. Elliott’s third runner, Felix Desjy, is the rank outsider too with the most to find on official figures.

Echoes In Rain and Saint Roi have points to prove

Mullins’ two others, Echoes In Rain and Saint Roi, retain potential but must make strides from their most recent runs. The former is the sole mare in the line-up but even with a sex allowance has a whole stone to find with Sharjah. Echoes In Rain, a five-year-old daughter of Authorized, couldn’t land a blow on the favourite in the Morgiana on reappearance. She is far too keen for her own good.

A progressive horse in novice company last season, Echoes In Rain landed Grade 2s at Naas and Fairyhouse over Easter before scoring at the highest level at Punchestown. The fierce hold she takes in races is the concern. Getting weight all-round, however, Echoes In Rain is an 11/2 chance with William Hill to strip fitter for her return to action.

Saint Roi was a Champion Hurdle hope for leading Irish owner JP McManus last season but couldn’t build on his 2020 County Hurdle triumph. Despite winning another Grade 3 on reappearance, this six-year-old Coastal Path gelding was twice behind Sharjah at the highest level over course and distance. Saint Roi didn’t seem to see his races out.

That is a concern, especially with a racecourse absence of 326 days coming into this. Saint Roi faded into fourth in the Matheson Hurdle 12 months ago and filled the same spot in the Irish Champion Hurdle also at this venue. His record fresh is mixed, so it’s no surprise he is a top-price 12/1 with online bookmakers to bounce back on his return. This race really is all about Sharjah.