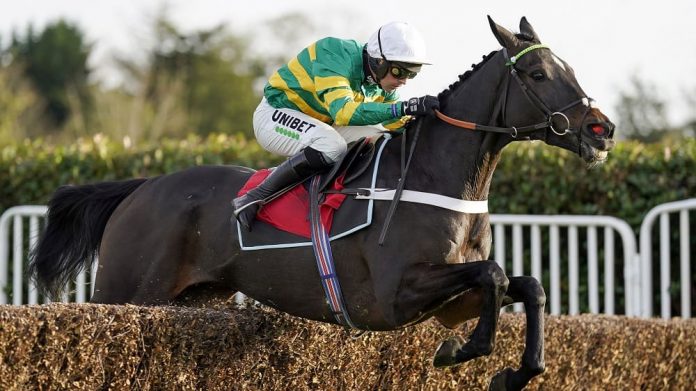 The King George VI Chase is the highlight of the festive fixtures in British horse racing on Boxing Day (3:05). This year’s race at Kempton promises to be no exception. These are our experts’ 2021 King George tips for the 3m Grade 1 feature on a stellar card at the Greater London track.

What do stats and trends say about this race? Well, King George VI Chase past winners in recent years have all had an official rating of 160 or higher. We are talking about the very best staying chasers in training. That doesn’t rule out many of the King George VI Chase runners with 10 left in at the five-day stage this year, though.

It usually takes an exceptional horse to win this as a nine-year-old and up. Eight of the last nine King George VI Chase winners were aged six, seven or eight – a stat all horse racing betting sites know well. Horses landing the race on more than one occasion is pretty common too. Since 1952, 15 equine stars have delivered two or more success in this Christmas cracker.

Recent King George VI Chase results show only four of the last 11 favourites have won the race. It also pays to be fit with every single successful horse in the dozen renewals since Kauto Star’s record-equalling fourth victory in 2009 landing the spoils off at least one run. Check out the latest 2021 King George tips from our experts here.

Why Clan Des Obeaux is prominent in the King George betting

Any horse trained by Paul Nicholls and that has won this race before is of obvious interest. The Ditcheat maestro has a phenomenal record in this contest, saddling five different horses to a dozen wins between them. Nicholls could have three runners in the King George VI Chase this year with the market speaking for Clan Des Obeaux.

Now a nine-year-old, the Kapgarde gelding took this in both 2018 and 2019 but missed out on his hat-trick 12 months ago. Rumours of the demise of Clan Des Obeaux were greatly exaggerated. He went on to win the Betway Bowl at Aintree and Punchestown Gold Cup in some style from dual Cheltenham Gold Cup hero Al Boum Photo.

Punters may pick holes in the renewals of the King George that Clan Des Obeaux won but there is no knocking the way he ended last season on a massive high. Nicholls has decided to come here fresh in a bid to regain his crown. While he knows what is best for Clan Des Obeaux, the fact is that this horse has never won first time out over fences.

That is a major concern, especially when coupled with the prevailing trend for race-fit horses winning the King George VI Chase in recent years. An on-song Clan Des Obeaux will certainly have claims anyway. That is a major reason why he is the 11/4 favourite with William Hill in an absorbing renewal on paper.

Track and trip a concern for Minella Indo

Irish trainer Henry De Bromhead won three of the four open championship races at the Cheltenham Festival earlier this year, not to mention the Grand National. His Cheltenham Gold Cup hero Minella Indo is expected to come on for his reappearance at Down Royal, so also holds a prominent place in online bookmakers‘ King George betting here.

This eight-year-old son of Beat Hollow left a poor fourth in the Irish Gold Cup behind him with Festival glory in the spring. Minella Indo didn’t participate in the Punchestown equivalent due to a stone bruise but may get a crack at Clan Des Obeaux now. He kept on into third in the Down Royal Champion Chase behind the potentially re-opposing Frodon and Grand National contender Galvin.

This is a much deeper race on paper, so Minella Indo will have to come on significantly for the run. He may well do that, but has put his best foot forward at Cheltenham over the years. That is an undulating, testing and galloping track – the polar opposite of Kempton Park with its tight turns and flat geography.

Minella Indo should get a strong pace but may find nippier types tough to peg back over this course and distance. Any King George tips will always respect Irish raiders but there is a case against this particular one. Minella Indo is a top-price 3/1 with QuinnBet to win another leg of the British Staying Chase Triple Crown.

Bet on Minella Indo with QuinnBet

Likeable and game Frodon sure to make bold bid

Last year’s King George VI Chase hero Frodon is back for the defence of his crown. Also trained by Nicholls, this popular nine-year-old son of Nickname has delivered on the big stage. A heroic victory in the 2019 Ryanair Chase was perhaps only surpassed by an even braver display in this 12 months ago.

Frodon and regular jockey Bryony Frost made all the running under a superbly judged ride. Whether the pair will be allowed their own way in front again remains to be seen, but it gives them obvious claims. Frodon didn’t stay further when a fading fifth in the Cheltenham Gold Cup but has won his next two starts either side of a summer break.

He met Minella Indo on that one’s side of the Irish Sea first time out and beat him comprehensively. On the face of it, Frodon looks overpriced in relation to his old rival over this course and distance. He is rising 10, however, and may now be vulnerable to younger legs. It is very easy to be sentimental about Frodon too.

Unlike stable companions Clan Des Obeaux and Saint Calvados, who were in-behind him here last year, he comes to Kempton off a run. That may give Frodon an edge over them. A repeat bid at 9/2 with Betfred simply cannot be discounted.

Bet on Frodon with Betfred

Leading Irish owner JP McManus has never won this race, yet Chantry House‘s trainer Nicky Henderson does have three successes. The pair always make for a powerful combination, so they have an intriguing contender here. Chantry House is a seven-year-old son of Yeats seeking a five-timer over fences in 2021.

After winning at Wetherby in February, he profited from Envoi Allen’s early fall in the Marsh Novices’ Chase at Cheltenham. Chantry House had similar luck when stepped up in trip for the Mildmay Novices’ Chase at Aintree. The name of the game is jumping, though. Chantry House then made all in a match with The Big Breakaway to land a Listed contest at Sandown.

He is well worth a crack at this level in open company off the back of those exploits. Chanty House had potentially re-opposing Irish raider Asterion Forlonge five lengths behind him at Cheltenham, so should have the measure of that one. Ladbrokes Trophy runner-up Fiddlerontheroof was way behind at Aintree too, so there may still be more to come.

Nico de Boinville, on board for all six of Chantry House’s chase starts so far, again takes the ride. There could be further improvement in him too. Of the potentially progressive horses in the race, Chantry House gets the vote. He looks the best value among 2021 King George tips with Bet365 going 11/2 about his chances.

Bet on Chantry House with Bet365

The other Irish raiders, Asterion Forlonge and Tornado Flyer, may not turn up. Both trained by Willie Mullins, the former is a very difficult horse to catch right. Asterion Forlonge has three falls or unseats in eight starts over fences including last time out.

Tornado Flyer, meanwhile, hasn’t won a race for over two years. Saint Calvados was fourth and lost two places on the run-in 12 months ago, so appeals least of the Nicholls trio. Henderson may try Mister Fisher over the trip again but he has shaped like a non-stayer.

Instead, for those looking to back an outsider, Lostintranslation is due a bit of luck in this race. The last two King George VI Chase results show Colin Tizzard’s charge as pulling up after never travelling. Connections believe they have got his breathing right, however. Lostintranslation returned to form with victory in the 1965 Chase at Ascot last month. Going back to 2019, he also won the Mildmay and Betfair Chase at Haydock.

Team Tizzard had a terrible campaign last term but the yard is in much better form this season. Lostintranslation needs a step forward from his Ascot success but comes here fit and well. The King George demands more, yet he looks an obvious each way angle into the race especially with any bookies offering insurance. BoyleSports go 10/1 about Lostintranslation erasing bad memories of the last two years at Kempton.

Back Lostintranslation each way with BoyleSports

Back this horse each way for the King George VI Chase: