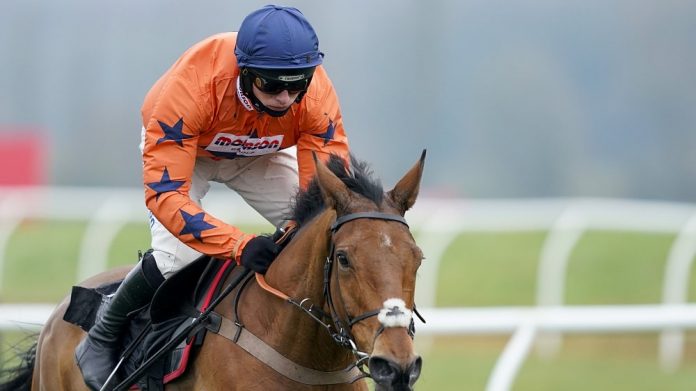 On a stellar Boxing Day card at Kempton Park, the first of three Grade 1 races is the 3m Kauto Star Novices Chase (1:55). Although guaranteed a smaller than average field, this race has launched the careers of Long Run, Coneygree and Shan Blue in recent years. See who SportsLens experts fancy to add their names to that roll of honour with their Kauto Star Novices Chase tips below.

Each of the last four winners had an official rating of 150 or higher going into the contest. That tells us some of the top staying novice chasers in the UK landed the spoils. Only three of the last 10 favourites in the race that honours Kauto Star have obliged. There has been some drama, most notably Might Bite falling at the final fence when seemingly cruising to victory in 2017.

Nicky Henderson has trained a record five winners of the race but doesn’t have a runner this year. Most recent successful horses in the Kauto Star Novices Chase came to Kempton off the back of at least two previous outings over fences. Experience is important for the rigours of a Grade 1 event, then.

Six of the last 10 winners were six-year-olds, so it’s no surprise that the first three in the ante post market on horse racing betting sites fit that age profile here. Running at the Newbury Winter Carnival at the end of November before this has been a popular route for those punters who like to study trials. It’s time to get stuck into Kauto Star Novices Chase tips from our experts.

Champion trainer Paul Nicholls has won this race four times before, mostly recently with Black Corton. He has two of the initial six entries with the clear pick of the pair being Bravemansgame. A French-bred six-year-old, he won an Irish Point by eight lengths before joining the Ditcheat maestro.

After finding things happening too quickly for him in bumpers, Bravemansgame improved for going over hurdles. He won three of his first four starts in that sphere, progressing to land the Grade 1 Challow Hurdle at Newbury last Christmas. Nicholls then put Bravemansgame away for a tilt at the Ballymore during the Cheltenham Festival.

He lost little in defeat when a 12-length third to Bob Olinger, who has since easily won a competitive beginners chase at Gowran Park. The fifth home, Does He Know, has also made up into a chaser. Only 66/1 shot Ahoy Senor, who could re-oppose here, stunned Bravemansgame at Aintree on his final start and step up to 3m in the Sefton Novices’ Hurdle during the Grand National Festival.

Fences has always looked like being the making of this horse. Nicholls put Bravemansgame straight into an intermediate chase at Newton Abbot on reappearance where he jumped well and made all, impressively beating subsequent Charlie Hall Chase winner Fusil Raffles by 5 1/2 lengths. He then followed-up in a graduation chase at Haydock where he got the better of previous Grade 1 scorer Itchy Feet.

As Bravemansgame has taken on more experienced chasers and won, he commands tons of respect now back in novice company. His price of 4/5 with BoyleSports reflects that, however. With the participation of old rival Ahoy Senor far from certain, Bravemansgame is the one to be on.

Lucinda Russell is having a fabulous season with the runners from her Perthshire stable. Ahoy Senor cruised to victory at the Newbury Winter Carnival and, as noted above, the Kauto Star Novices Chase is the next logical place to come. However, his handler will not run the six-year-old Dylan Thomas gelding on quicker ground.

A British Point winner, Ahoy Senor went from a maiden hurdle success in March to Grade 1 glory on just his second start over the smaller obstacles a monthlater. It was a major shock at Aintree but a victory earned on merit. It left the impression of an exciting campaign over fences to come if Ahoy Senor could back it up.

He was an unlucky faller two out in the Listed 2m 4f Colin Parker Memorial Intermediate Chase at Carlisle on reappearance. However, Ahoy Senor left that well behind when bolting up in the Grade 2 John Francome last time out. He won completely unchallenged by 31 lengths from a lightly-raced Irish raider in Mr Incredible. That has earned him top rating in this line-up of 157.

The Kauto Star Novices Chase demands more, yet Ahoy Senor may not take his chance in it. Russell wants rain and a softer surface than the current good going at the time of writing. It’s a shame if he does miss out on the contest but there may be other options in midwinter where conditions suit. As his involvement isn’t guaranteed, there looks little value in odds of 5/4 with William Hill about Ahoy Senor here.

Remainder of Kauto Star Novices Chase entries must step up

Nicholls may also run Threeunderthrufive for the McNeill family, who likes small fields just fine. A Listed winner at Perth in the spring, this six-year-old Shantou gelding has also won three of his four chase outings this term. Threeunderthrufive has the experience but not the class of stable companion Bravemansgame. He also holds an early closing entry in the Welsh Grand National.

Threeunderthrufive landed the Grade 2 December Novices’ Chase at Doncaster earlier in the month, besting old hurdles rival Fantastikas. He needs another step forward on that form to land a blow on the top two in the betting. That explains why William Hill are a top-price 6/1 about Threeunderthrufive pulling off a surprise four-timer here.

Millers Bank (10/1) and Chepstow Listed scorer Tea Clipper (16/1) could take each other on again in the Kauto Star. The former didn’t get round in the Grade 2 Berkshire Novices’ Chase at Newbury last time out for trainer Alex Hales. Tea Clipper, meanwhile, trailed in a distant second as all bar him and Nassalam fell in the race. Both Tom Lacey’s charge and Millers Bank have more to find with the principals than official ratings suggest.

The McNeill family could also run 25/1 outsider Kiltealy Briggs. Trained by Jamie Snowden, this seven-year-old is only one from seven over fences but that victory came last time out. He prevailed by a neck at Haydock earlier this month but still has a whole stone on ratings to find with Threeunderthrufive. The Kauto Star Novices Chase really is a race that revolves around the first two in the betting, then.

Back Threeunderthrufive with William Hill