Liverpool take on FC Basel in the last match of the Champions League Group B match at Anfield, where the Reds need to win to progress to the knock-out rounds.

The Reds have no other alternatives than to win this game, where as a draw would be enough for Basel to qualify to the next round.

Real Madrid coach Carlo Ancelotti said after their 1-0 hard earned victory against Basel in their last Champions League game that the Swiss side should be favourites to qualify to the round of 16. Basel have played better football than Liverpool this campaign and are heading into this tie on the back of a five straight wins in the league.

Liverpool on the other hand have failed to beat Sunderland at home on Saturday, but in games like this, with Anfield crowd acting as the 12th man, Liverpool players can really life themselves up and produce a performance worthy of high praise.

The thing is they have done that before. And once again, the Reds will look up to Steven Gerrard to replicate that moments of magic once again. 10 years ago exactly this day, Gerrard’s thunderbolt against Olympiakos took Liverpool into the knock-out rounds and went on to lift the trophy beating AC Milan in the final at Istanbul.

Rodgers’ team selection has been criticised heavily by the Liverpool fans this season. He simply cannot afford to make any tactical blunder on a game of this magnitude.

How Liverpool should approach the game? The Reds need to win. Goals are important, but at the same time, they have to stay resolute at the back.

Rodgers should go with his best possible starting XI, where Alberto Moreno deserves to continue on the left back side. Lucas Leiva and Joe Allen should continue as midfield pivot in the 4-2-3-1 formation, while Gerrard should return in place of Coutinho in the no 10 role. 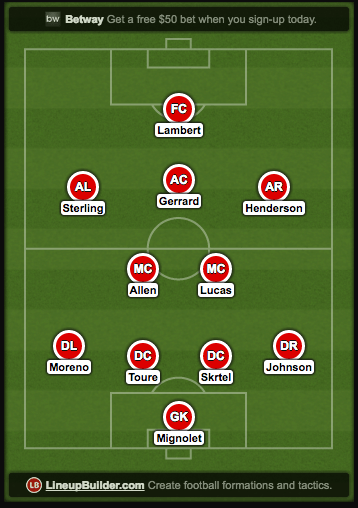 Prediction: Liverpool have always performed well in big European nights. The Reds will give their best to prove a point or two. Liverpool 2-1 Basel.