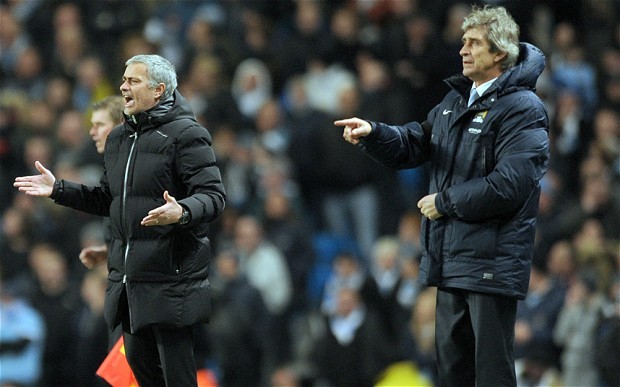 It is difficult to say that a game at the end of January is a title-decider. But with Chelsea leading Manchester City by 5 points going into their mouthwatering clash at Stamford Bridge on Saturday, it will be safe to say that a win for the Blues will make the deficit more or less unassailable for the defending champions.

It’s been a busy week for Chelsea, who saw hopes of a treble-winning season quashed after a shock defeat against Bradford City in the FA Cup last weekend. This was followed though, by a morale-boosting win in the Capital One Cup semi-final second-leg over Liverpool, which booked a day in the Wembley final. On the flipside, that game went the distance and required 120 minutes to determine a winner, and took its toll on a side that included several first-team regulars.

Man City have been in very poor form of late, and were knocked out themselves of the FA Cup unceremoniously last week, by Championship side Middlesbrough. Manuel Pellegrini’s men were level on points with Chelsea at the start of the month, but regular slip-ups have seen them hand over the initiative. Their last league game was a 2-0 home defeat against Arsenal, a game that exemplified their recent frailties.

With regards to team news for Chelsea, there is a lot of guessing game involved. In a retaliatory gesture towards Diego Costa being charged with violent conduct in the Liverpool game, Jose Mourinho cancelled his press conference today. The Spanish striker, who is the top-scorer in the league this season, will be out of Saturday’s clash.

Didier Drogba and Loic Remy are available at Mourinho’s disposal, and I suspect that he will go with the experience of the Ivorian for this big game. Branislav Ivanovic needed stitches on his foot after the game on Tuesday, but should be fit for this one. The best news for Chelsea though, is that Cesc Fabregas trained today despite picking up a hamstring injury against Liverpool. He too, should play on Saturday.

There will be an emotional homecoming for Frank Lampard in this one, who returns to Stamford Bridge in a Chelsea shirt after spending 13 years as a Chelsea player. The Blues’ all-time top goalscorer scored against them in the reverse fixture to earn a point for his side, but he is set to receive an extremely warm reception from what he will still consider ‘his’ fans. Chelsea’s new signing Juan Cuadrado may be signed in time for him being available for selection, and we might well see the Colombian come on for a late cameo.

Here is the possible Chelsea starting line-up vs Manchester City: 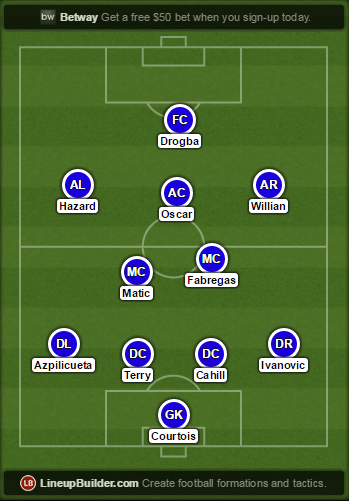 Both these sides have looked vulnerable defensively over the past few weeks. With the plethora of attacking talent on display, we may be in for a high-scoring encounter. At the end of the day though, home advantage will play a defining role as Chelsea pick up all three points to more or less seal the title.