Barcelona and Spain defender Gerard Pique was chosen to be the global lead athlete for the new Nike Tiempo Legend IV football boots.

At the launch of the Tiempo Legend, Pique was interviewed about the boot, Fabregas, Euro 2012, why did he cut the net off in the final and more. Here is the transcript:

Gerard, from next season you’ll be wearing Nike’s new Tempo Legend IV Elite boot. What are the most important qualities you look for in a boot?

Above all, comfort. One of the things that makes football different to many sports is how little equipment there is. Your boots are the one piece of equipment you have, the one tool, and it is vital that you feel absolutely comfortable. You need support but not rigidity, your movement has to be free. The other key thing from my point of view is that the touch on the ball feels natural – the softer the leather, the better. I like the classic look of these boots too, with that touch of color.

It must have been difficult to put up with all the pressure and the off-field distractions during this season?

Yes. But all the extra pressure, all the demands have been overcome in the end and we showed that we can compete.

I have to ask you about Cesc Fabregas and his future. Last year it looked like he would come to Barcelona, what do you think could happen this year?

I have said before and I still do that my hope is that one day he will play for Barcelona. I would love to have him alongside me because as well as a good person, he is a great player. I would love him to be here this year or if not then next year. He would give us more. Last year it looked like he would come but he didn’t. Now it looks like he could again but we have to wait. I hope the people in the offices [ie the sporting directorate at Barcelona] can work well and can bring him in this time.

Have you spoken to Cesc? How does it look from Arsenal’s point of view?

I haven’t spoken to him recently. I don’t know how Arsenal are set up economically but I do know that he is a great player and a real friend of mine and he is a Barcelona player – he has been in the youth system here and he knows what we are about. He could perform perfectly here.

What do you envisage next season?

Every year is harder. They have all been hard years and I think that next year will be hard. To keep winning and to keep living with the demands is hard – but not the pressure of the fans; I mean our own pressure, the pressure we put on ourselves. We want to win a fourth league title like the Dream Team and a second Champions League in a row, which no one has done before. We apply that pressure to ourselves and we are very ambitious. It gets harder but not because of us – it gets harder because with every passing year the opponents make more and more effort to try to defeat us.

What about the European Championships with Spain?

That’s a lovely challenge for us and I think we have more than enough talent to do it. It’s wonderful opportunity for us to make history. We really love the idea. So much has been said about a bad atmosphere in the Spain squad but we have shown that is not true this time round – we have won twice and played well in our recent trip to the US and Venezuela. We have to carry on like that. We have to be united on the inside no matter what they say on the outside.

What do you make of Porto and the Super Cup?

Porto are a great team and it will be very hard to beat them. Plus, in the Super Cup you have to go to Monaco, which is a very cold stadium; the day before they give you prizes and you disconnect a bit from the task in hand. And they are a good side, who have won the treble and have fast, strong players up front.

Will Barcelona be bringing in reinforcements? You’ve been linked with Giuseppe Rossi and Alexis Sanchez.

I had the pleasure of playing alongside Rossi at Manchester United, we arrived at the same time and we were in the same team for a few years. He has loads of talent. He knows how to go long, come short, he has a good touch, and he is very quick. As a person he is ten out of ten. He would be very welcome. Alexis: I don’t know him personally but he is a great player with a brilliant talent when one-on-one. We suffered against him for Spain. We would receive him with open arms.

Have you discussed a return to Barcelona with Cesc Fabregas? How important are trophies to him?

Players always want to win titles and in this case Cesc has not had the opportunity to do so at Arsenal. For him, it is a chance to come here and play with his team mates and at the same time to win titles. He is an Arsenal player and I have all the respect for the Arsenal fans but if you ask my opinion, I hope he can play for Barcelona in the future. He is my friend and that is my opinion.

Why did you cut off the net in the Champions League final?

I did the same in Rome, I cut some pieces for all my friends who wanted a nice present, a reminder of the final. And I always keep one for me. I put it on the wall with the Barcelona shirt and the Manchester United shirt as a reminder of all the finals that we have won.

Why is it so hard to defend the Champions League title?

Because when you win a title like this all the other teams want to sign more players and get better to beat you. It is hard to keep the same level and be the best one year, and another and another. We have the players that we need to do it – all out players are top level. I think we can but we must have a bit of luck to be champions.

Can Lionel Messi finally win something with Argentina?

I think so, Leo will be the key for Argentina in the Copa America. If they know how to play with him, they can do important things in the competition. Leo is the best player in the world and you have to know how to use him: you have to play around him. Brazil is always a great team too. They and Argentina will be the favorites.

It’s different; you have relationship that is not only professional. You have good friendships and when your mates are playing well you are happy for him – I think you can see that on the pitch. For example Carles Puyol is my best friend in the dressing room and you can see on the pitch. When I look at him I know what he is thinking. 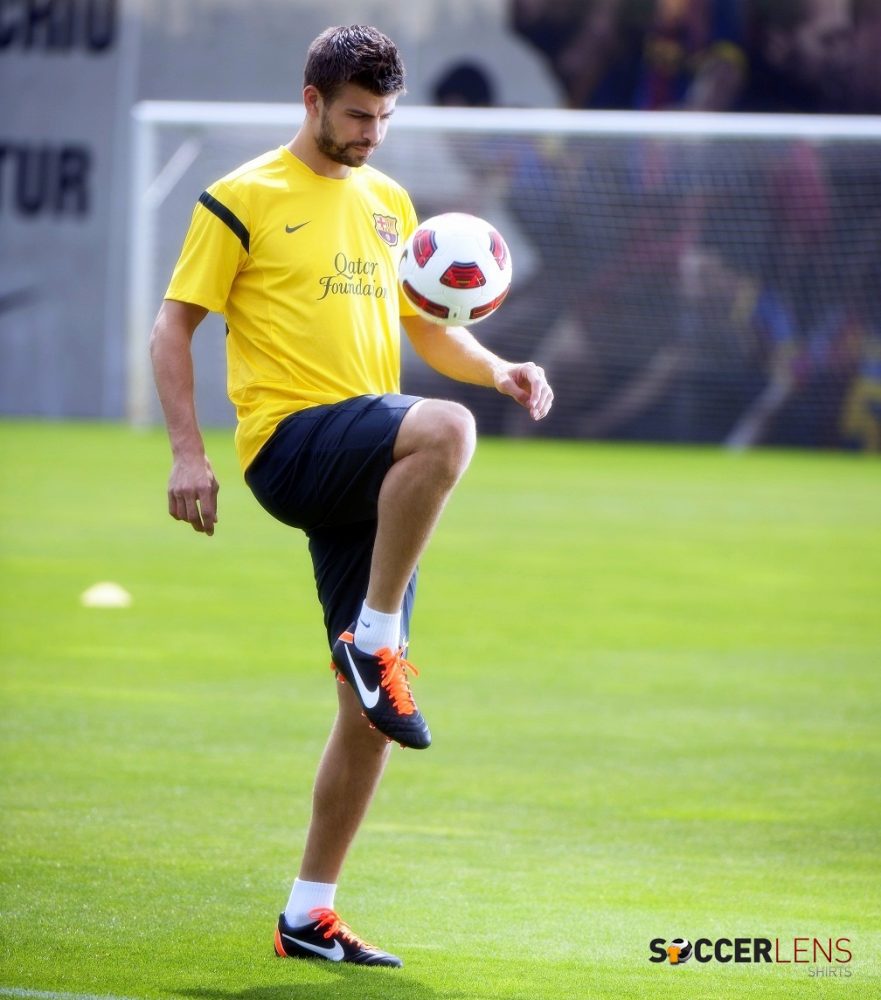 Romario, Maldini and Cantona have all worn the Nike Tempo Legend IV Elite boot. How do you feel wearing the boots?

These are the best boots I have ever worn. I know the history of the boots. They are the classic boots. But they are really, really modern. They weigh very little and they adapt well to your feet. You can feel the ball well so your touch is better.

The European Championships are in Poland and the Ukraine next summer. What do you know about the two countries?

I won the U19 European Championship in Poland and I have great memories from that country. To go there next year and try to win will be great.