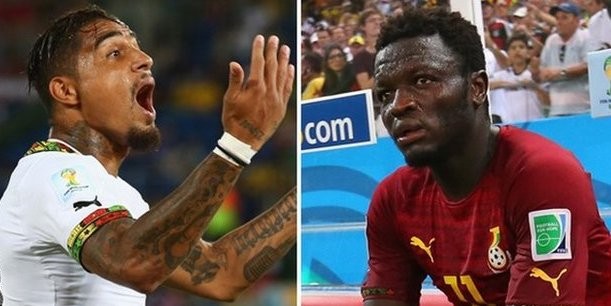 Just as you thought Luis Suarez was to be the epitome of bad behavior in South America, Ghana have today revealed that star duo Sulley Muntari and Kevin-Prince Boateng have been sent home on the eve of their crucial match against Portugal for severe breaches of discipline.

The BBC report that AC Milan midfielder Muntari was guilty of an “unprovoked physical attack on an executive committee member”, while Boateng had used “vulgar verbal insults targeted at coach Kwesi Appiah”.

Neither player will take any further part in Ghana’s World Cup campaign and have “been suspended indefinitely”. 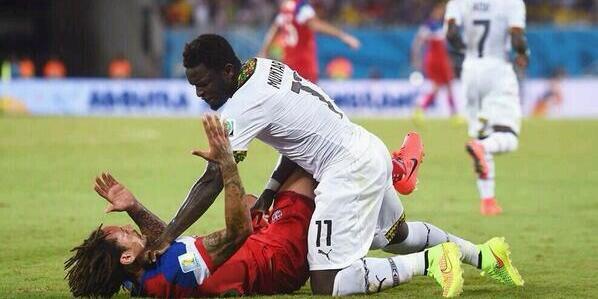 The 29-year-old Muntari was said to have assaulted Moses Armah, a member of the team’s management, with details now seeping through across social media as to the extent of the attack.

Conflicting reports about the Muntari ban, claims he punched the official, not slapped, and destroyed an iPad.

While Muntari has yet to comment on the issue, Boateng has confirmed that he is leaving Brazil, with the Schalke 04 man denying any wrong doing.

Speaking to German magazine Sport-Bild, the 27-year-old said: “Sulley Muntari and I were just joking around, and the coach stopped the session and sent us back to the changing room.

“Afterwards I went to him and asked what he had against me and he started yelling. He insulted me. There were words like: ‘**** off.’”

Boateng said he “absolutely accepts” his suspension, but added: “No one should think I insulted the coach. I’m travelling now, and I wish my colleagues all the best for the match against Portugal.”

USA 0-2 Germany – Jurgen Klinsmann’s side have been nothing short of wonderful in South America, but the Germans should be a step too far.

Portugal 2-1 Ghana – A win for Cristiano Ronaldo and his side, but not one that will see them through to the last 16.

Algeria 1-1 Russia – A surprise draw, and one that will see Fabio Capello’s Russia bow out early.