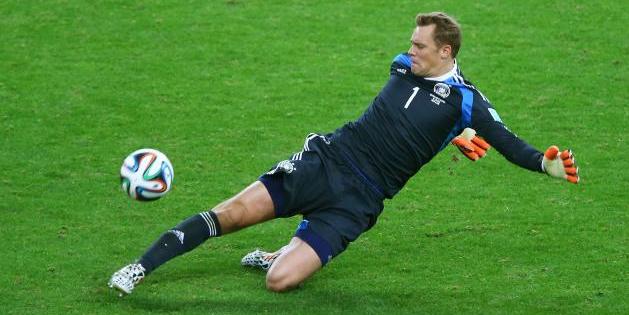 The 2014 FIFA World Cup round of sixteen captured the imagination of fans all over the globe, bringing us memorable moments that will be cherished for years to come.

While Chile narrowly missed out on a quarter final spot, it can be said that Brazil rode their luck into the quarters, with the emotions displayed during and after the dramatic penalty shootout in the Belo Horizonte surely unprecedented throughout the history of this stage of the competition.

Argentina and France left it late against Switerland and Nigeria respectively, Colombia’s unprecedented rise has been nothing short of stunning, while Costa Rica and Belgium, despite the pair now entering unknown waters, will take some stopping.

Check out this alternative roundup of the tournament so far, with the world eagerly awaiting the business end of the competition:

Costa Rica is the happiest country, and for good reason: 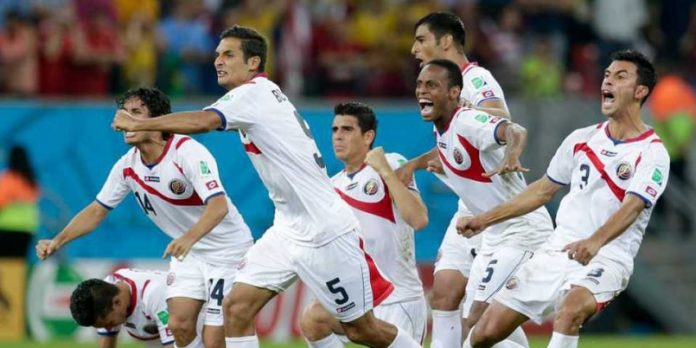 With a population of 4.8 million, around one thirteenth of England, the tiny Central American country is the ‘happiest country’ to live in according to the Happy Planet Index, where citizens embrace a “sustainable well-being”.

Costa Rica’s World Cup odyssey has been quite incredible, with Jorge Luis Pinto’s side really only expected to only make up the numbers in Group D, yet they now only have Holland the way of a stunning semi final berth.

Pinto’s effective 5-4-1 system saw them see off Uruguay in their opening encounter before fending off Italy and then drawing against England in a dead rubber affair to top the group. Scenes of mass hysteria back in San Jose and Alajuela were perfectly understandable, with the country’s president coming out on the streets to celebrate with fans after the ten man Costa Ricans beat Greece in penalties. 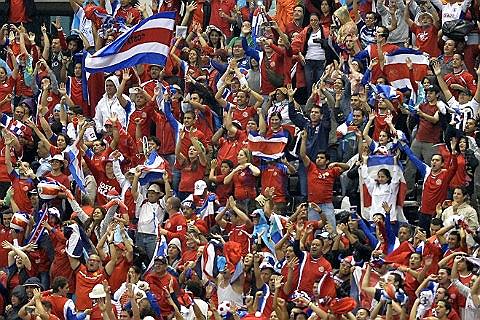 Pinto’s side are perhaps the greatest underdog story in the World Cup since Cameroon in the 1990 and North Korea in 1966. Back home, private sportswear firm Lotto claimed that  they are short in supply of the national team’s jerseys following a sales rise 20-fold as the Los Ticos continue their dream run. Who doesn’t love the beautiful game? 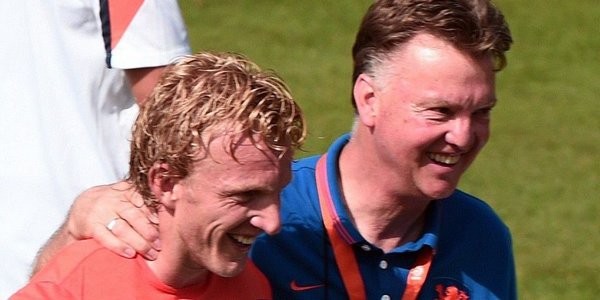 The 33-year-old former Liverpool attacker ran 11 kilometres in the sweltering heat of Fortaleza against Mexico last week, constantly changing positions from left wing back to right back and finally striker, to ensure that his team’s tactical flexibility under coach Louis Van Gaal remained. 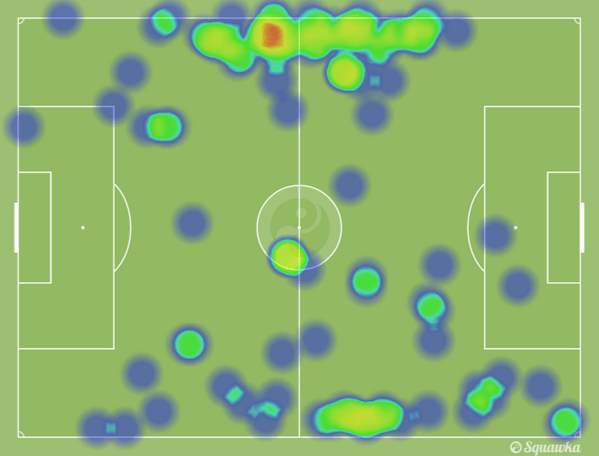 The Fenerbache man received no respite from the glaring rays in the non-shaded section of the pitch, where even spectators in the stands wouldn’t sit. Kuyt’s logic-defying stamina on the anniversary of his father’s death received a special mention from Holland great Johan Cruyff, who claimed that that the Dutch are blessed to have a player like the blonde workhorse.

Goals galore in the 2014 World Cup: Thanks to our friends from Sports Matrix, we have a wonderful infographic highlighting the details of every goal scored so far in South America this summer: 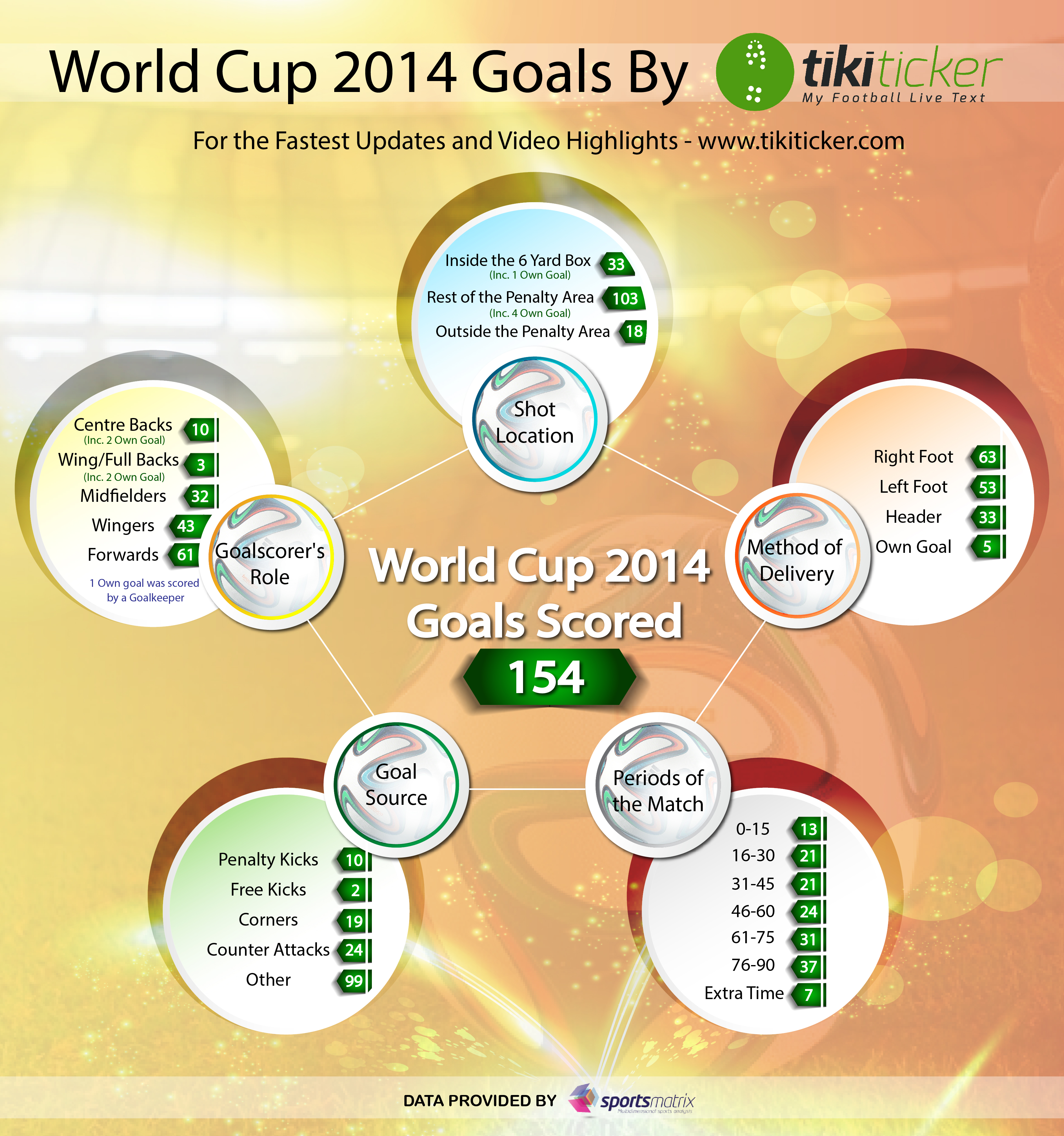 According to the stats, the 2014 World Cup has already bested it’s predecessor in terms of goalscoring, with the 154 strikes recorded before the quarter finals, which is nine more than the 145 goals scored at South Africa 2010.

According to Opta stats, the number of shots in knockout stages has increased from 19.85 per game to 26.13, while shots on target have also jumped from 9.04 to 11.63. Whether its poor defending or brilliant finishing, one wonders if tactical changes to a more attacking style has helped the cause.

It is interesting to see that wingers have scored close to 28% of the tournament goals so far, with their searing pace utilised to great effect by their respective nations so far. Concentration has to be a key factor in the heat and stats show that teams have scored 37 times between the 76-90th minute of a match.

Fun Fact: A total of 58 players will celebrate their birthdays during the World Cup!

The German shot stopper was incredibly brave coming out time and again off his line to help out his team against Algeria. 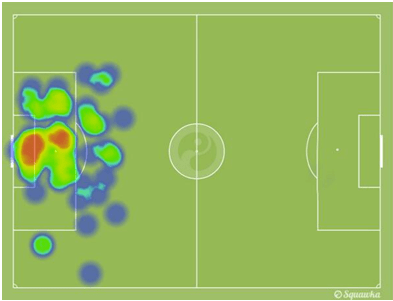 The Bayern Munich number one had 59 touches of the ball, 21 of them outside the area. Germany have a history of world class sweepers, with Franz Beckenbauer and Lothar Matthaus the two most famous exponents of this style, but the ‘Butcher of Seville’, Harald Schumacher, is afraid that Neuer might make a terrible misjudgment in the later stages of the tournament.

What are your predictions for the rest of the tournament? Who will make off with the prestigious trophy come July 13th?